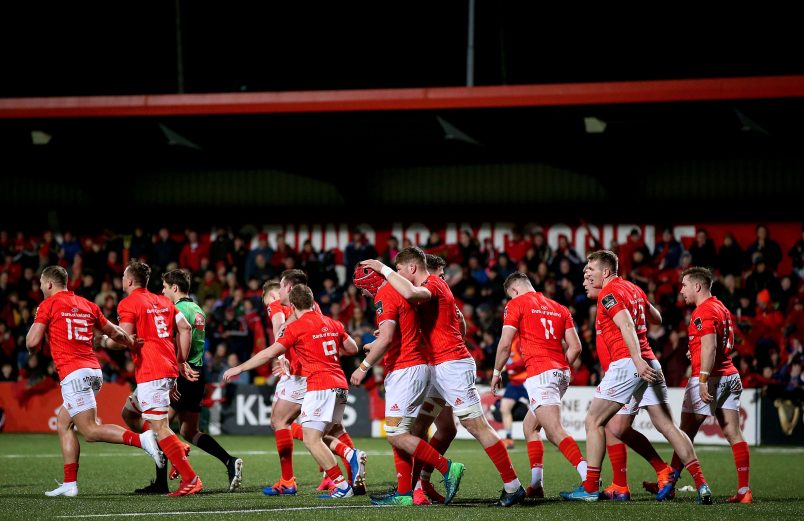 The Munster squad celebrate a try in the record win over Southern Kings in February. Inpho

It has been a very busy few months on munsterrugby.ie and across our social media channels as we have taken the opportunity to celebrate all that is great about our club.

Take a look at some of the most popular items we have posted over recent months with news, exclusive player interviews, full videos of classic Munster matches, highlights from the current season and player profiles from the Munster 200 club.

We are hoping for a return to action in August but there’s plenty below to keep you going until them with more content posted daily on munsterrugby.ie.

We posted three classic matches on Youtube with over 65,000 views. Check out the games below.

Three players have been added to the Greencore Munster Rugby Academy ahead of the 2020/21 season.

Check out some of the best moments below.

Ian covered a wide range of topics including his early days as Munster Rugby CEO, the prospect of Munster returning to the field in August, James Cronin’s ban, our incoming signings and much more.

State of Play is our fan-led series where you set the agenda with Munster Rugby management and staff answering your questions on all aspects of rugby in the province.

The Munster Rugby Supporters Club have received a huge response from Munster supporters after opening for renewals last week with thousands of fans signing up for next season. An incredible 99% of members that have responded have chosen to renew their membership for next season, we are extremely grateful for everyone’s support as always.

Pass The Ball With Munster Rugby

As everyone works together as a team to prevent the spread of coronavirus, we came up with a different way to pass the ball to each other. Watch our virtual pass the ball competition with supporters and players below.

An absolutely incredible response from supporters far and wide who wanted to #PassTheBall with the Munster men’s and women’s squads!

Thanks to everyone for helping us highlight the importance of social distancing — watch to see who won a signed jersey!#SUAF 🔴 pic.twitter.com/hCtoreNbdU

Check out the highlights of all departing players and our interview with Tyler Bleyendaal below.

It was confirmed in recent weeks that eight players will join the Munster senior squad next season.

Rugby World Cup winners Damian de Allende and RG Snyman have already complete their self-isolation periods and are settled in Limerick with Roman Salanoa moving to the province from Leinster and Matt Gallagher joining from Saracens.

Stand Up And Fight

Take a look back at the origins of Munster anthem Stand Up And Fight, which was started by Team Manager Brian O’Brien back in 1999.

It went from an initiation on the bus to the squad’s post-win dressing room song to an anthem for tens of thousands of Munster supporters at Thomond Park, Irish Independent Park and beyond.

To recreate one special element of a Munster matchday, we invited supporters to join a very special rendition of Stand Up And Fight with our Energy Partners Pinergy providing a fantastic prize – one year’s FREE Electricity for one lucky household.

Watch the fans rendition below and Jean Wallace singing Stand Up And Fight before the Racing 92 game at Thomond Park earlier this season.

Watch some of the best moments from the season so far below.

Read all of the key stats and see the best photos here.

The Munster Rugby Supporters Club used this match-free time to reach out to supporters, calling on them to vote for their greatest Munster 23 of the professional era.

See the fans’ favourites below.

The coaching team led by Head Coach Johann van Graan showed their support for the Peter McVerry Trust #ForHomesFromHome and those in homelessness, by working together to create a message of support.

We are calling on others who are working from home at this time to get behind the campaign and donate online with more details here.

📸Our coaching team showing their support for our #nominatedcharity @PMVTrust

The influence of players from outside of Munster has been a constant in the 25 years of professional rugby.

Take a look back at some of the best imports from 1995 to the present day. Read more here.

Three wins over the Wallabies and much more.

Read a full history of Irish Independent Park, dating back to 1938 here.

In Pics – Munster Shirts Through The Years

Take a look back at the evolution of Munster Rugby jerseys from the amateur era to the present day – from the traditional red shirt and white collar to the modern adidas designs.

In April, Munster Rugby launched a new partnership with Phelan Gaming, marking their entry into esports.

The partnership will see Phelan Gaming rename as Munster Rugby Gaming for their participation in forthcoming tournaments.

The landscape of European rugby has changed beyond recognition over the past 25 years with more fixtures now packed into the schedule than ever before.

30 Munster senior and Academy players lined out for their clubs in the 2019/20 All Ireland League campaign.

See how they got on here.

Our exclusive retail partners Life Style Sports are offering up to 50% off the Munster Rugby range.

We are more than three-quarters through our series profiling the players who have reached the 200-cap landmark for Munster.

See more info on the careers of the 200 Club below.