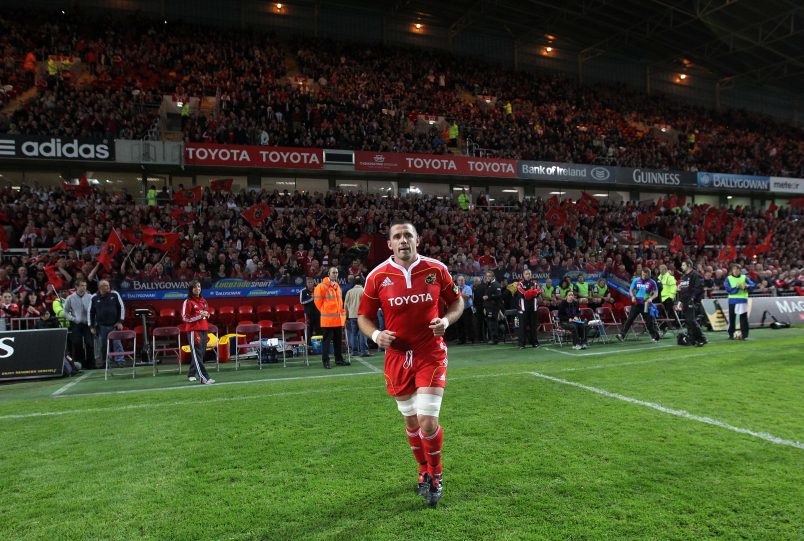 Alan Quinlan leads Munster out on his 200th appearance. Inpho

In a new series profiling the players who have reached the 200-cap landmark for Munster, we take a look back at the careers of the 11 Munster men who played over 200 games for the province.

Anthony Foley was the first man to reach the landmark in 2008 and you can read more about his career here.

Alan Quinlan became the second player to earn 200 Munster caps in September 2010 and went on to make 212 appearances over a fantastic 15-year career. 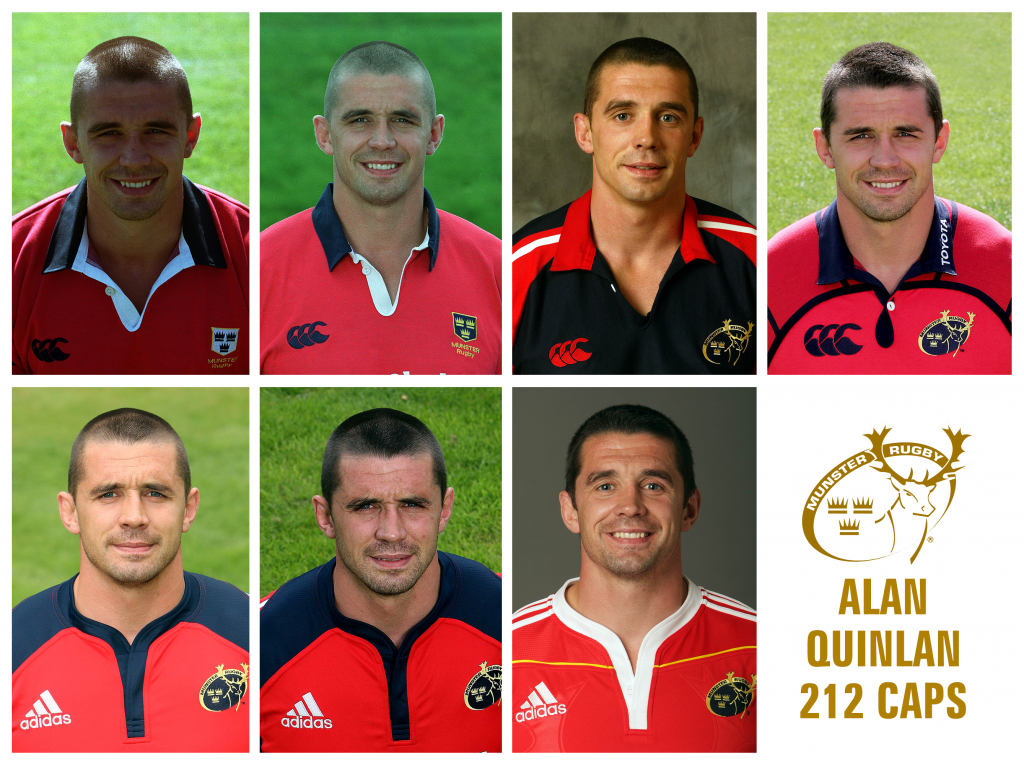 Alan Quinlan made his Munster debut 24 years ago against Western Samoa in November 1996 at Irish Independent Park with the hosts falling to a 35-25 defeat.

Frankie Sheahan also made his debut that day in a Munster side shorn of their Ireland internationals, who would be beaten 40-25 by the Samoans later that week.

The Clanwilliam FC man would go on to play a central role in Munster’s rise over the next 15 years, winning two Celtic Leagues, a Celtic Cup, and two European titles.

Primarily playing his rugby at blindside flanker, ‘Quinny’ could play across the back-row.

The Tipperary native started his career at Clanwilliam FC and showed his promise from an early age, captaining the Ireland U18s against Scotland in 1993.

He won the Munster Junior Plate with Clanwilliam in 1994 before transferring to Shannon RFC and going on to win five All Ireland League titles for his club, alongside fellow double centurion Anthony Foley.

A year on from making his Munster debut, Quinlan was an established starter for Munster and was a try-scorer on his European Cup debut against Harlequins in a 48-40 loss at the Stoop in 1997.

Quinlan came off the bench to make his Ireland debut at the 1999 World Cup against Romania in Lansdowne Road. He would go on to play in his second World Cup in 2003 scoring a crucial try against Argentina, dislocating his shoulder in the process. 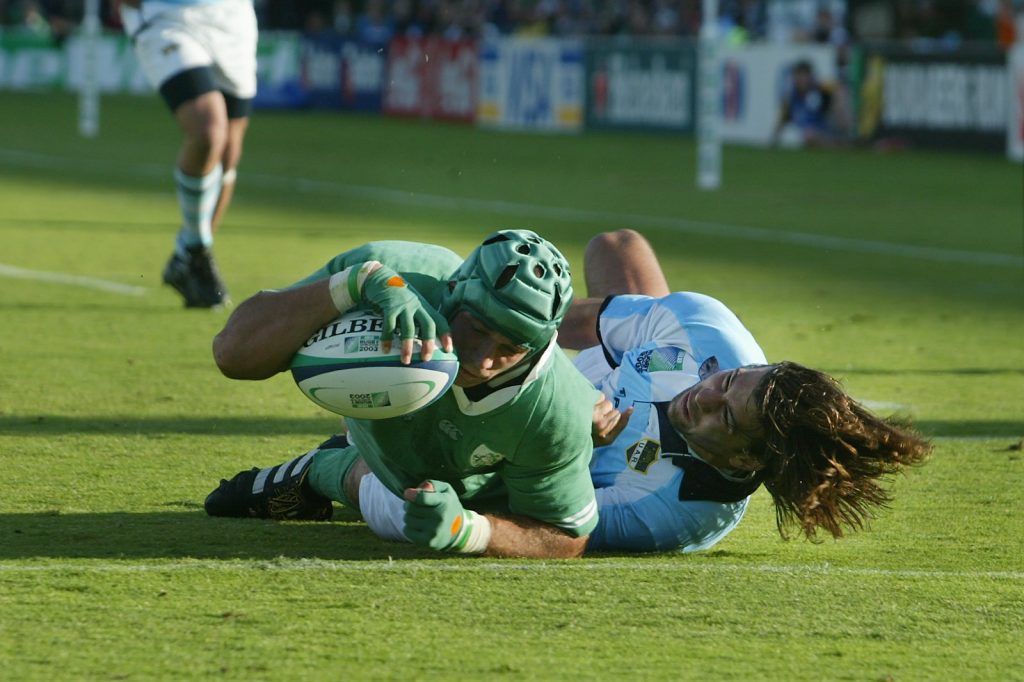 Alan Quinlan scores a crucial try against Argentina in 2003.

It was Heineken Cup final heartbreak for Munster in 2000 and 2002 with Quinlan a runner-up in both finals against Northampton Saints and Leicester Tigers.

Quinny won his first trophy with Munster  in 2003 as the province claimed the Celtic League and the Tipperary man won his 100th Munster cap against Cardiff at the Arms Park in March 2005. 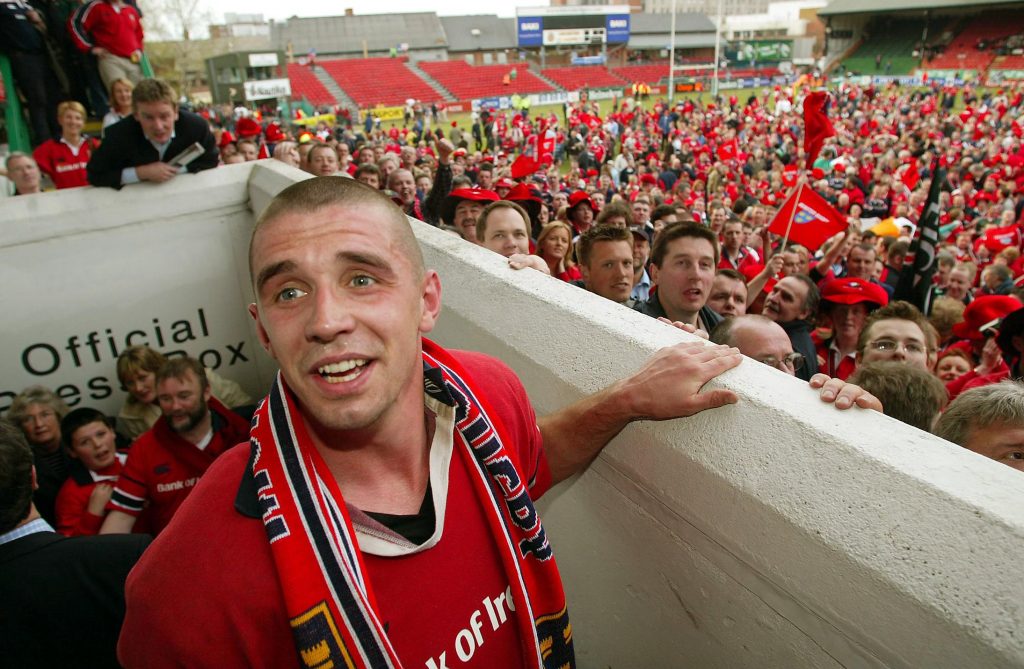 After the 2003 European Cup quarter-final win away at Leicester Tigers.

He missed the majority of the 2006 Heineken Cup-winning season through injury, but fought his way back to full fitness to make a late appearance in the final against Biarritz.

In 2008, Quinlan was named Man of the Match in the final of the Heineken Cup win against Toulouse as Munster lifted the trophy for the second time. 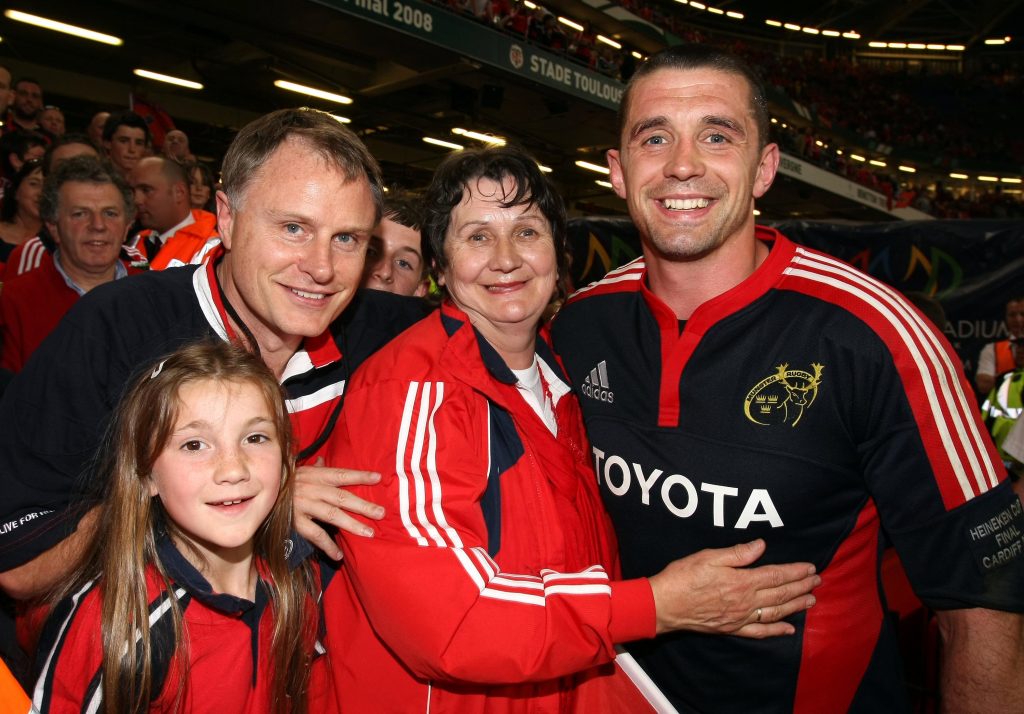 Celebrating with his mother after the 2008 European Cup win.

He made his 27th and final appearance for his country against the All Blacks on November 16, 2008.

Quinny helped Munster to a second Celtic League in 2008/09 trophy and was originally named in Ian McGeechan’s Lions squad in 2009, but missed the tour to South Africa due to a ban.

He became just the second player to reach the millstone of 200 appearances for Munster in September 2010 against the Ospreys. He was replaced late on by Billy Holland, who would go on to make his 200th appearance against Connacht nine years later.

Quinlan was a vital squad member as Munster won another Celtic League title in 2010/11 and made his 212th and final appearance against Connacht in May 2011, scoring a try to mark an end to his illustrious career in red.

His combative nature coupled with his physical size made him an integral part of the Munster pack for well over a decade. 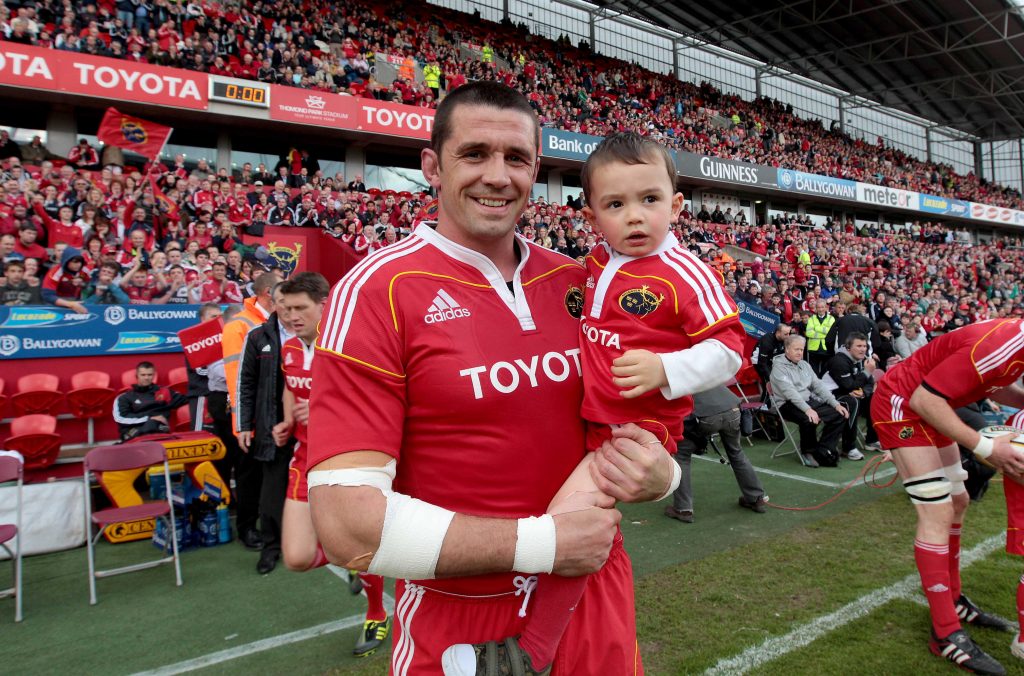 Alan Quinlan with his son AJ before his final game for Munster.

Stand Up & Fight | A Munster Anthem For Over 20 Years