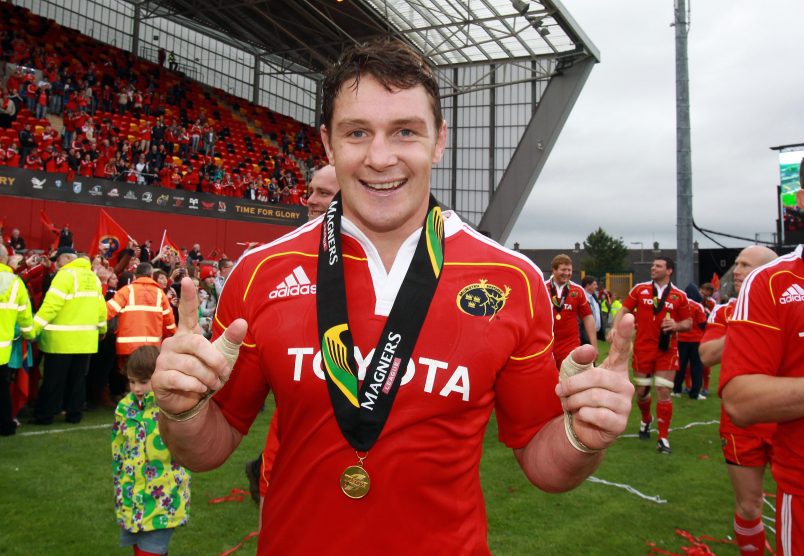 David Wallace celebrates the 2011 Magners League final win over Leinster with his Man of the Match award. Inpho

David Wallace became the sixth man to reach 200 appearances for the province in May 2011 and made a total of 203 appearances over a 15-year career. 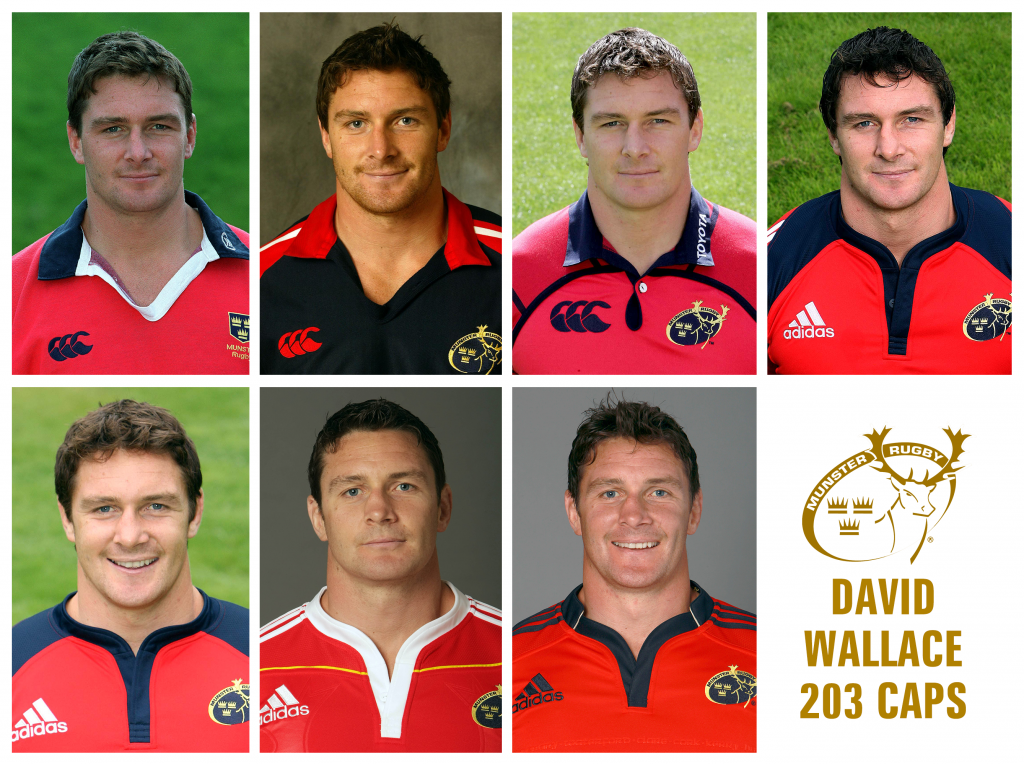 The sixth man to reach 200 caps for the province, David Wallace achieved the significant landmark in May 2011 and made a total of 203 appearances over a 15-year club career.

Wallace, known for his explosive strength and speed, played across the back row for both Munster and Ireland, accumulated 72 international caps over a decade of representation and toured with the British and Irish Lions on two occasions.

The Limerick native started his playing career at Crescent College, where he won the Clayton Hotels Munster Schools Senior Cup in 1994. 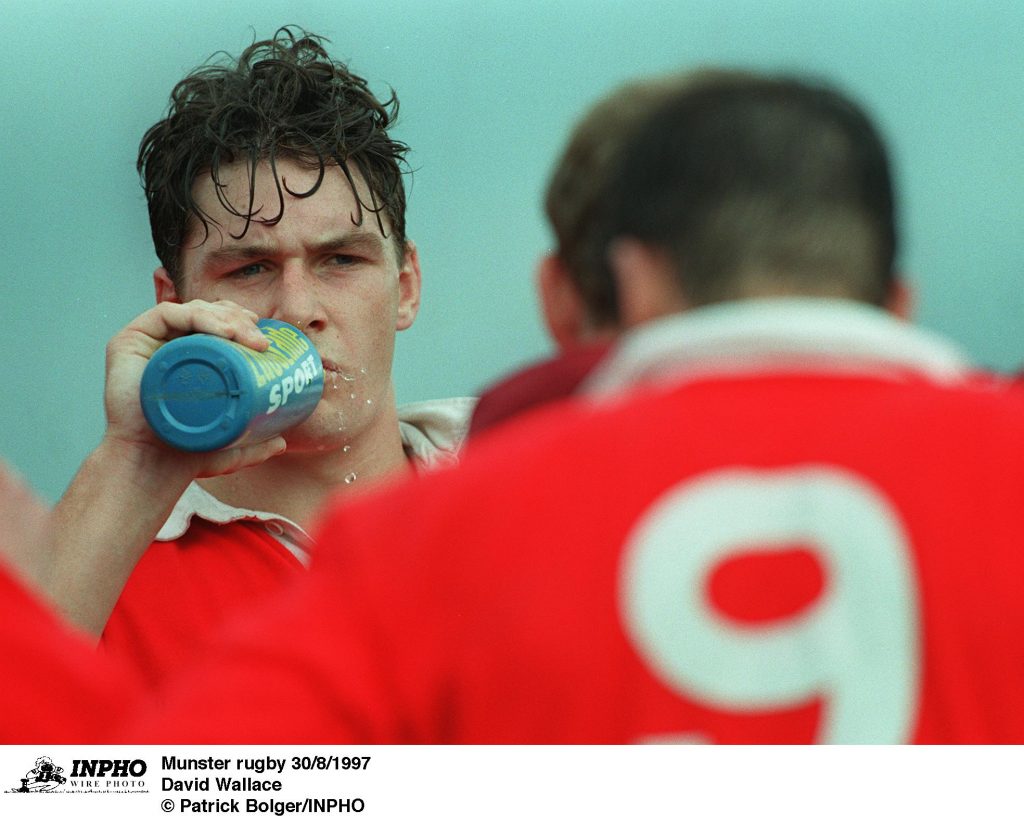 David Wallace on his Munster debut against Connacht in 1997.

Wallace joined Garryowen FC out of school and made his Munster debut against Connacht at The Sportsground in August 1997. 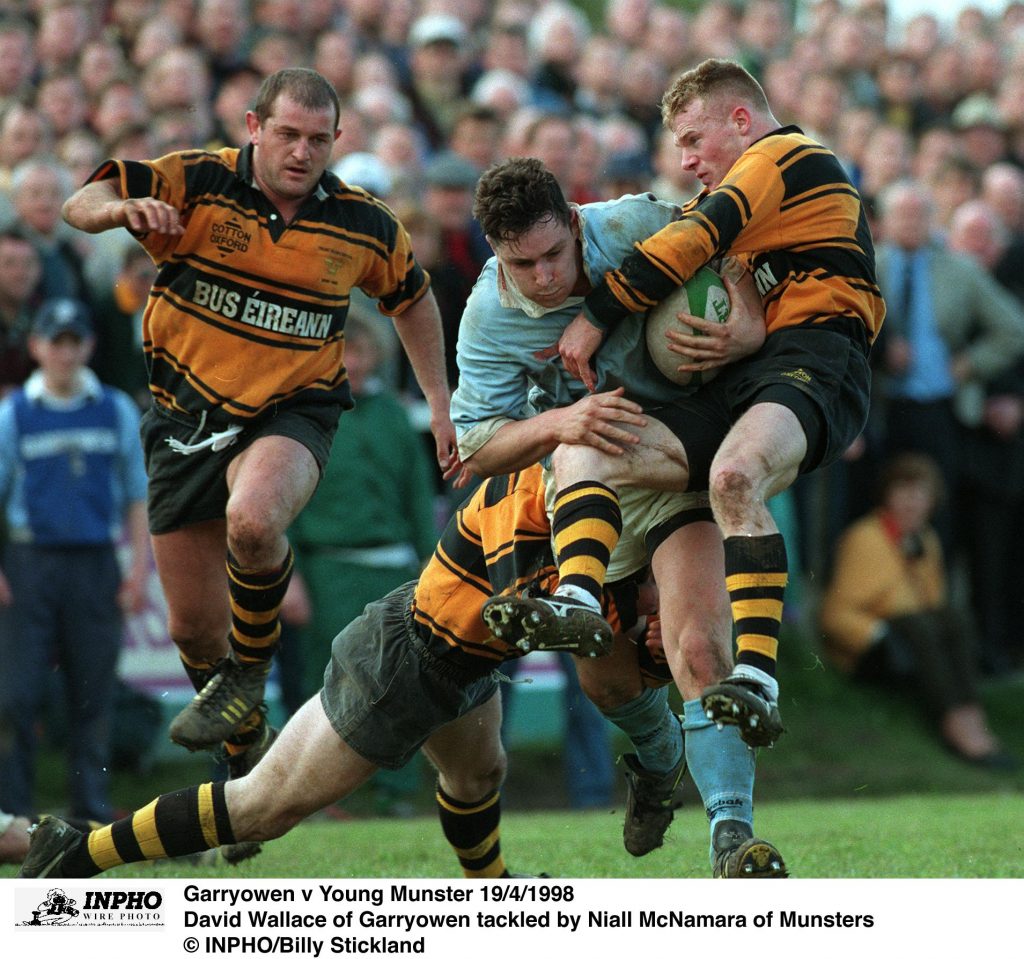 David Wallace is tackled by Young Munster’s Niall McNamara in 1998.

A European debut followed against Harlequins a month later and Wallace was soon a permanent fixture at openside flanker.

Wallace scored his side’s only try in the 2000 Heineken Cup final against Northampton Saints and started in the 2002 final against Leicester Tigers, as Munster were narrowly defeated on both occasions. 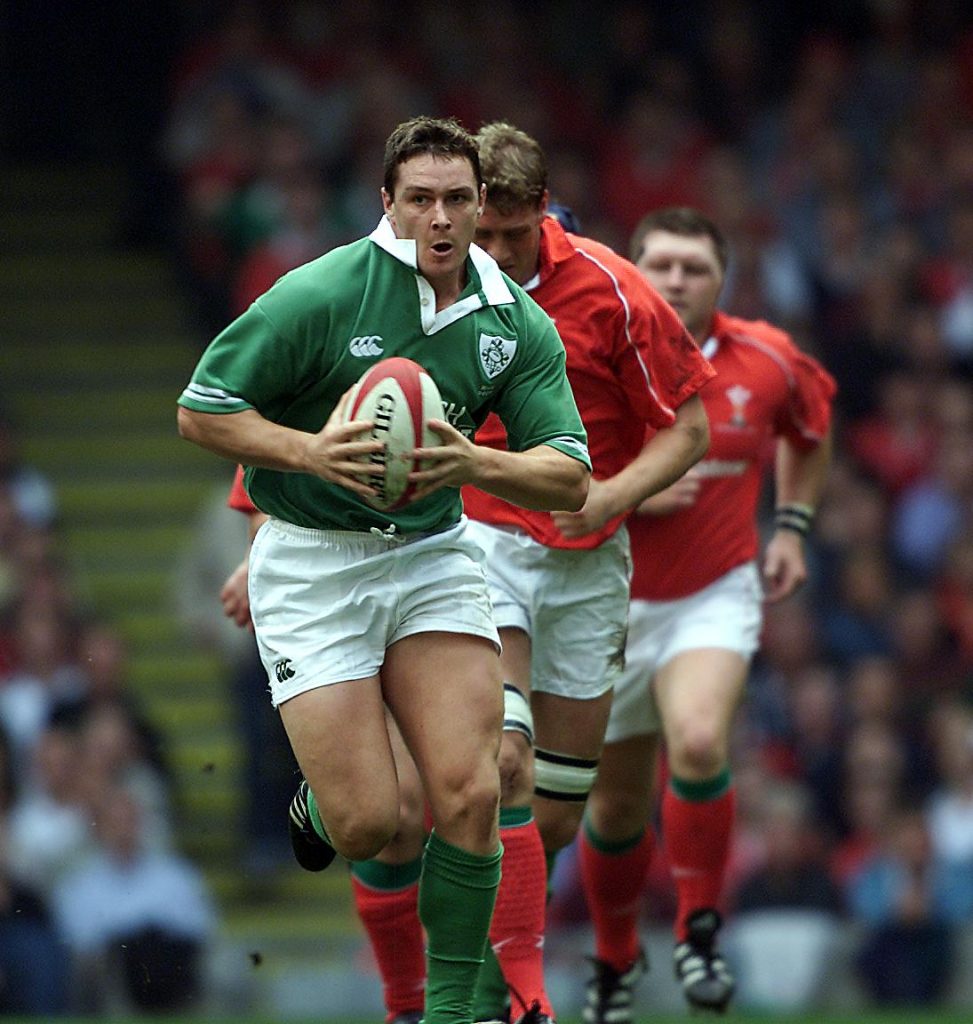 Wallace in action for Ireland against Wales in 2001.

Wallace made his Ireland debut against Argentina in June 2000 and his rise continued with selection for his first British and Irish Lions tour to Australia the following year. 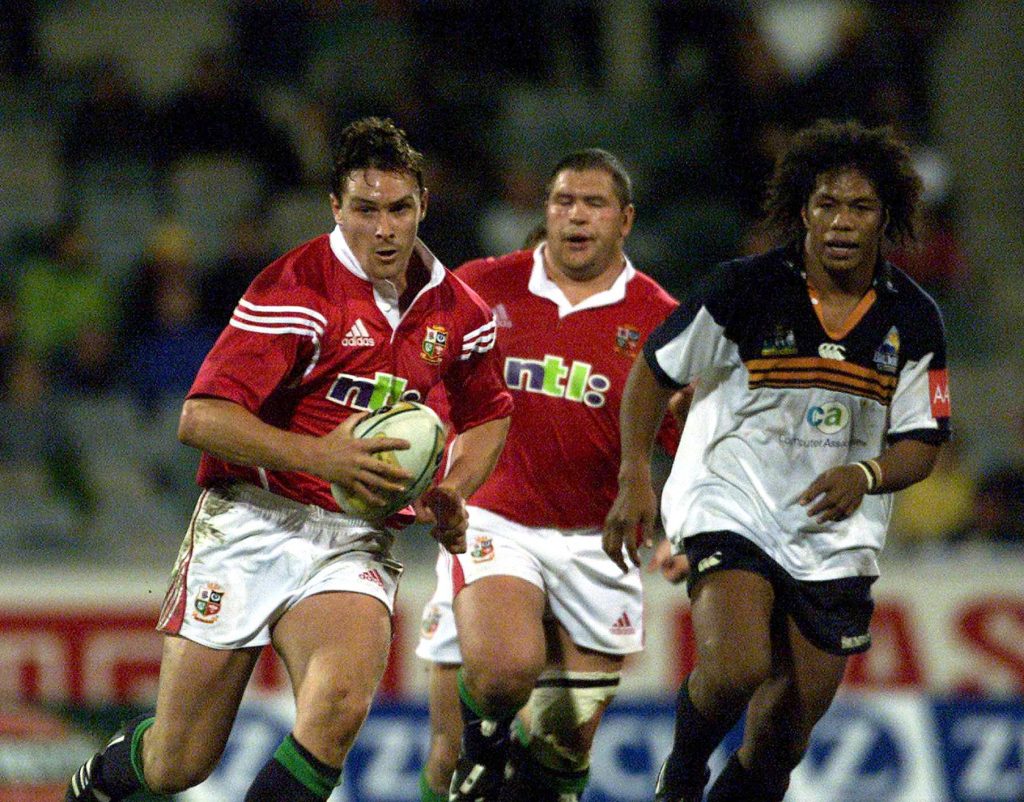 David Wallace on the charge for the Lions against the Brumbies in 2001.

As a British and Irish Lion, Wallace followed brothers Richard and Paul to become the first set of three brothers to play for the iconic side.

In May 2005, Wallace lifted silverware with his province in the Celtic Cup final against Scarlets.

During the 2005/6 Heineken Cup campaign, Wallace scored a crucial late try in Munster’s win over Sale to secure a home quarter-final.

Victory over Perpignan in the quarter-final and Leinster in the semi-final led to Munster defeating Biarritz 23-19 in the final and lifting the Heineken Cup for the first time with Wallace a key member of the forward pack. 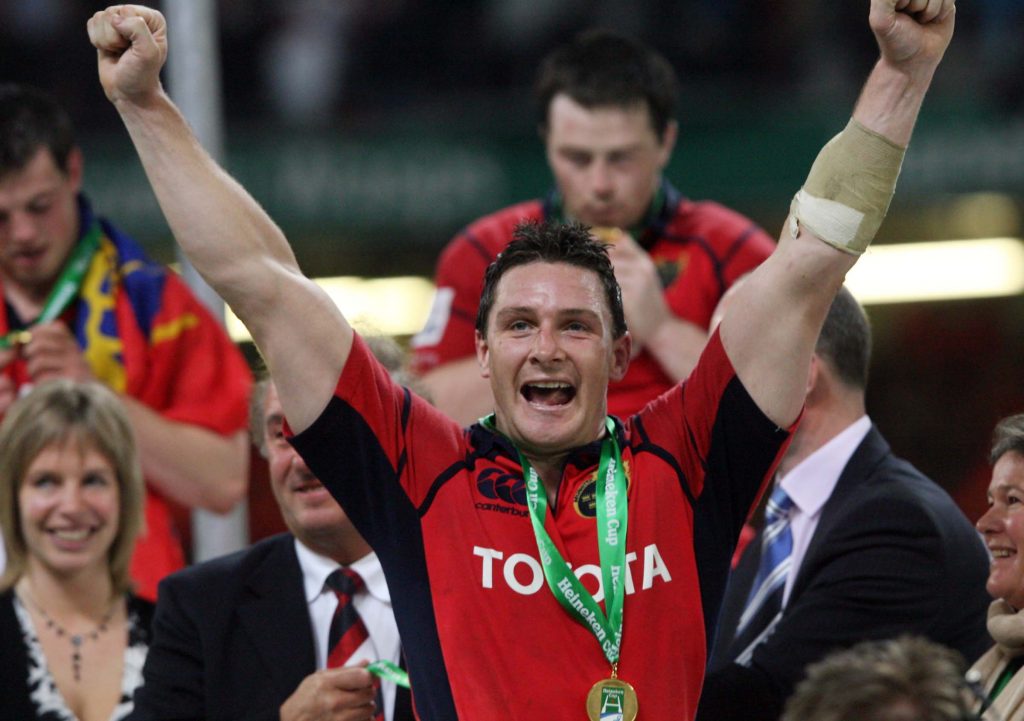 During the 2007 Six Nations, Wallace scored for Ireland in a 43-13 victory over England and was selected for the 2007 Rugby World Cup in France, starting all four of Ireland’s pool games at the tournament.

A second Heineken Cup success was achieved in the 2008 final as Munster and Wallace secured silverware after defeating Toulouse 16-13. 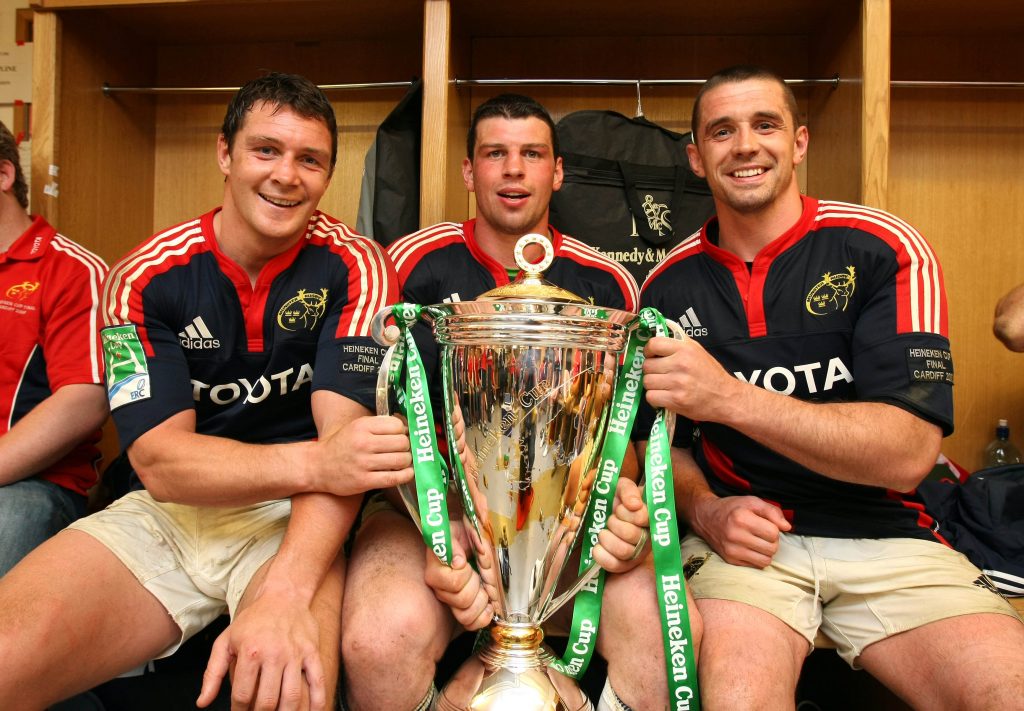 David Wallace, Denis Leamy and Alan Quinlan in the changing room after the 2008 European Cup victory.

Wallace won the 2008/9 Magners League with Munster and the wing forward reached 200 caps in the 2011 Magners League final against Leinster, producing a Man of the Match performance. 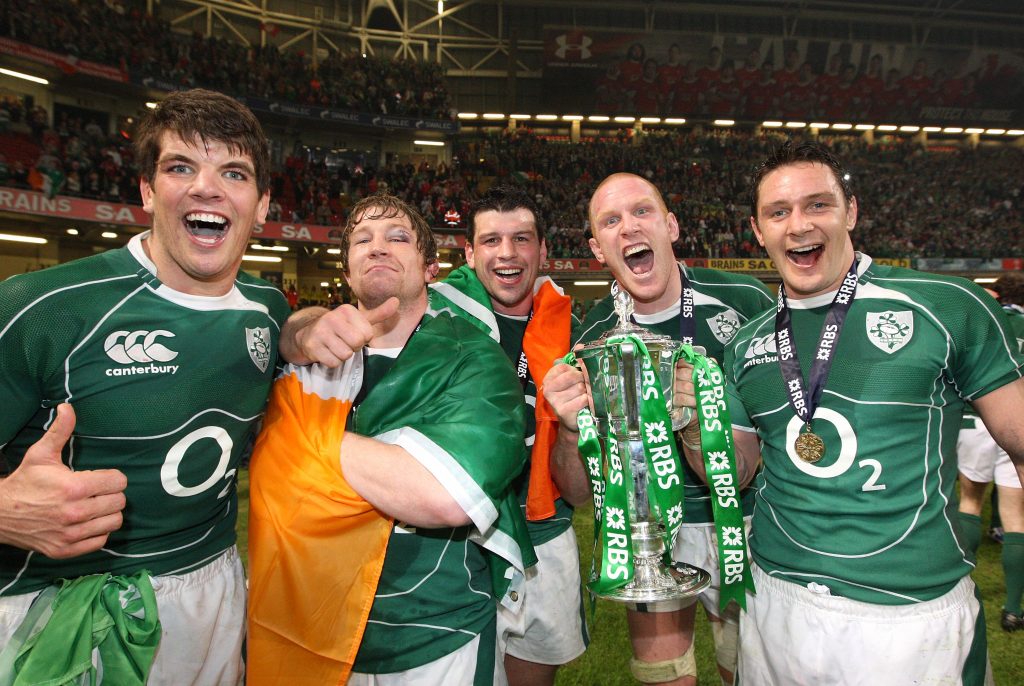 Wallace was selected for his second Lions tour in 2009 and featured in all three Test matches in South Africa. 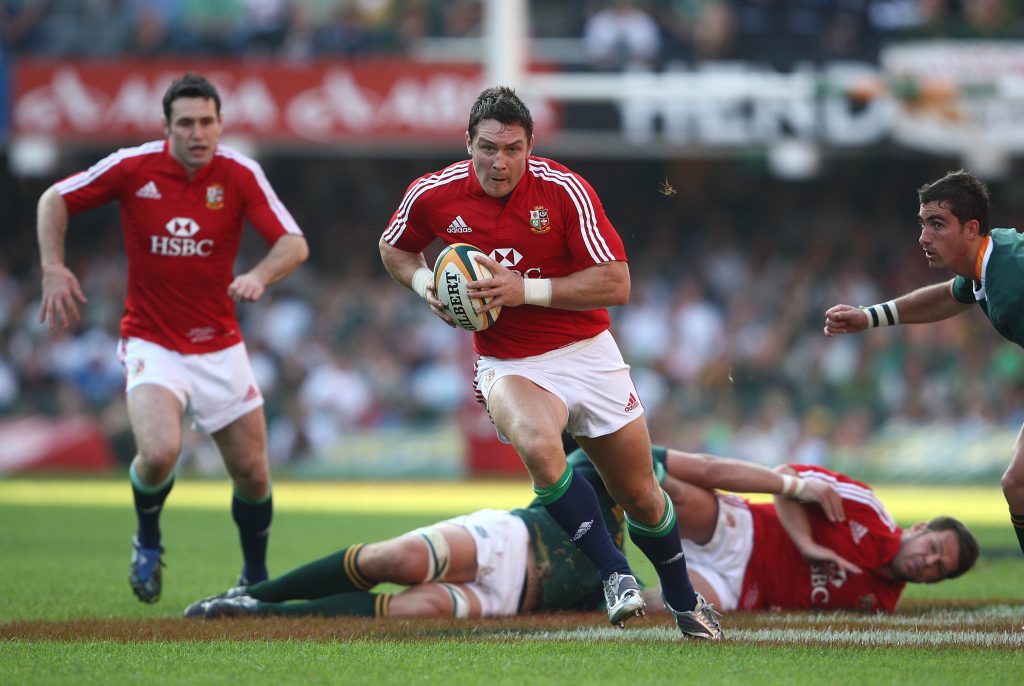 On the attack against South Africa in the first Test of 2009.

A member of the 2004 Triple Crown and 2009 Grand Slam winning sides in the Six Nations, Wallace also played a crucial role in the 2009 November Tests as well as the 2010 summer tour to New Zealand and Australia.

Wallace, who scored 60 points for his country, became Ireland’s most capped back row player during the 2010 Autumn Tests.

In April 2012, Wallace made a return from a lengthy knee injury and played for Munster in the Heineken Cup quarter-final against Ulster, which was to be the last of his 86 Heineken Cup caps.

The game against Ulster was his final appearance for the province as Wallace announced his retirement from rugby in May 2012 due to an injury initially sustained prior to the 2011 Rugby World Cup.