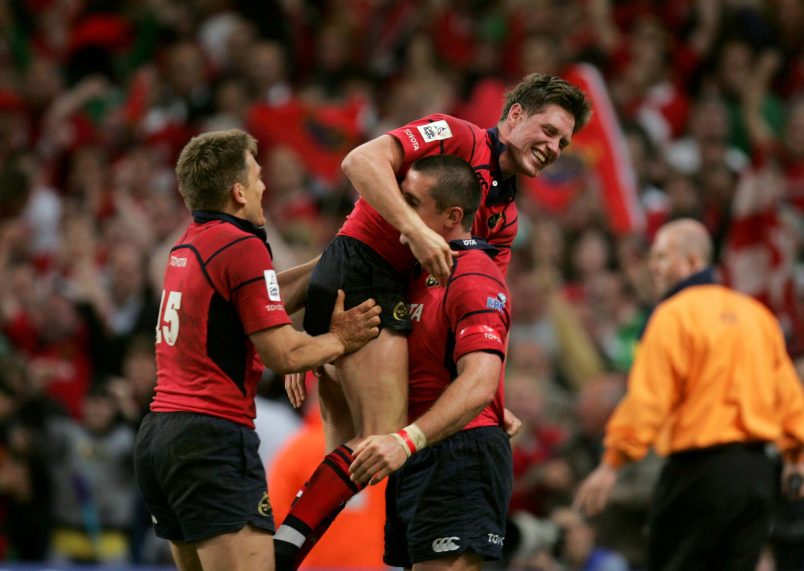 In our series profiling players who have reached the 200-cap landmark for Munster, we take a look back at the careers of the 11 Munster men who played over 200 games for the province.

Munster’s most decorated player Ronan O’Gara became the fourth man to reach the landmark in February 2011 and went on to make 240 appearances for the province.

He remains the leading points-scorer for Munster and in Champions Cup history, he scored a record 2,625 points for Munster and 1,365 in Europe – both feats are unlikely to be surpassed.

He was capped 128 times by Ireland and toured with the British and Irish Lions on three occasions.

O’Gara followed Peter Stringer, Anthony Foley and Alan Quinlan in earning 200 Munster caps, you can read more about their careers below. 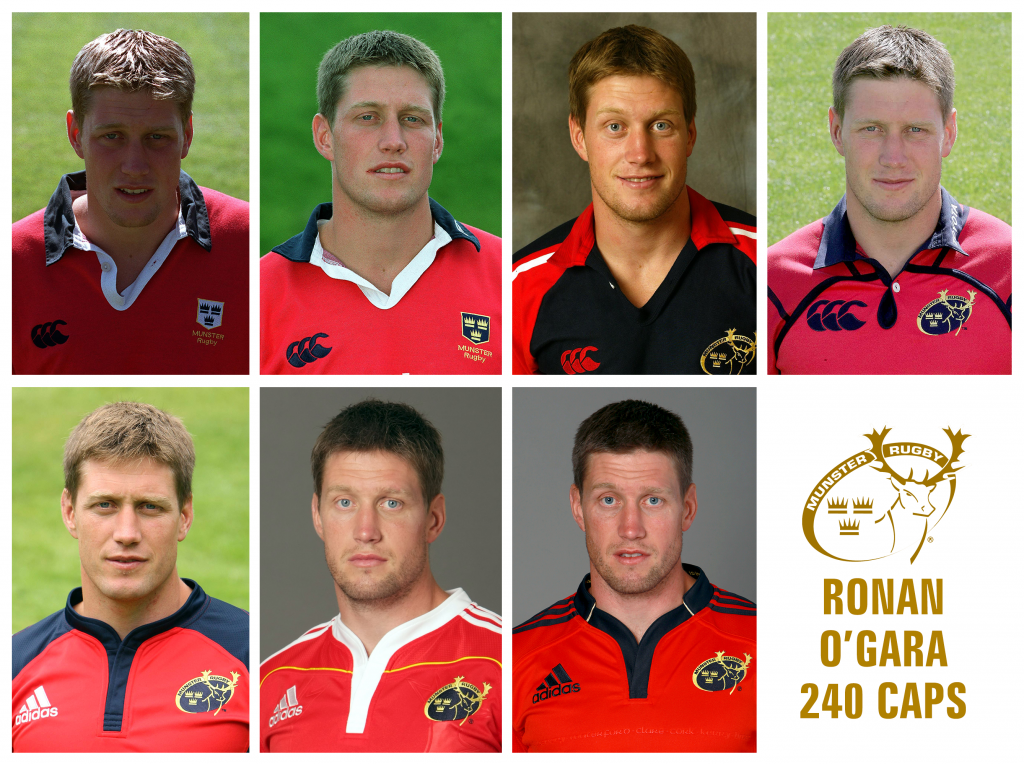 Ronan O’Gara enjoyed a remarkable 16-year professional career between 1997 and 2013.

O’Gara’s rugby days began in Presentation Brothers College in Cork where he captained his school to the Clayton Hotels Munster Schools Senior Cup in 1995.

In 1998 he helped the Ireland U21s to a Triple Crown success and clinched the 1999 AIL title with Cork Constitution after kicking the winning penalty in extra-time against Garryowen in the competition decider. 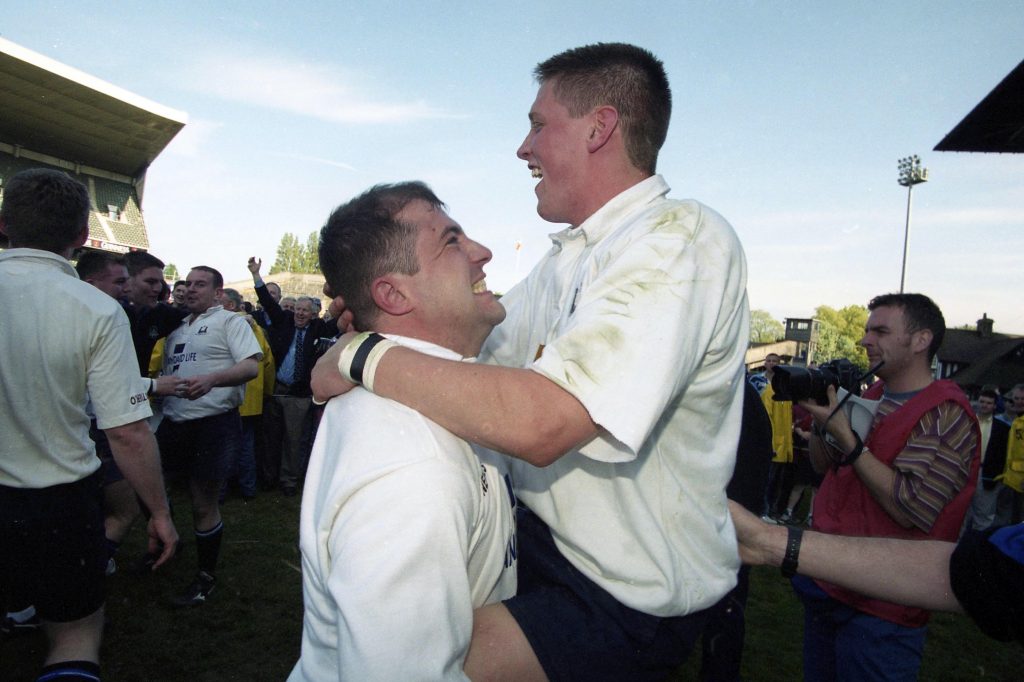 Ronan O’Gara celebrates winning the AIL with Cork Con in 1999.

He had already earned a place in the Munster squad in 1997, scoring 19 points on his competitive debut against Connacht in a 29-9 victory in August 1997.

Once he established himself as Munster’s starting ten at the beginning of the 1999/2000 season his was probably the first name pencilled in on selection sheets until his retirement in 2013. 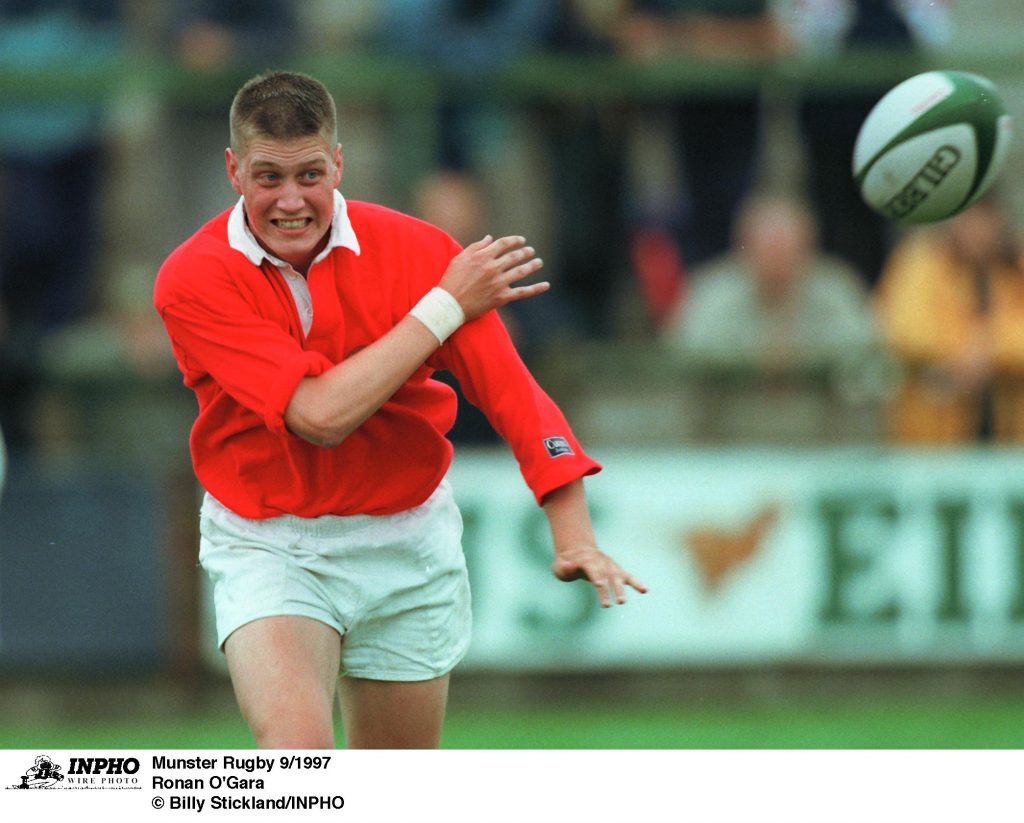 Ronan O’Gara on his second Munster appearance against Leinster in 1997.

In 2000, O’Gara made his debut for Ireland against Scotland in the Six Nations at Lansdowne Road, on the same day as his Munster half-back partner, Peter Stringer. His international career lasted 13 years where he made the number 10 jersey his own.

The Heineken Cup campaign of 2000 catapulted him onto centre stage and he played the leading role subsequently on many occasions. He did so with aplomb for Munster and Ireland not just creating records but establishing ones that are unlikely to be surpassed. 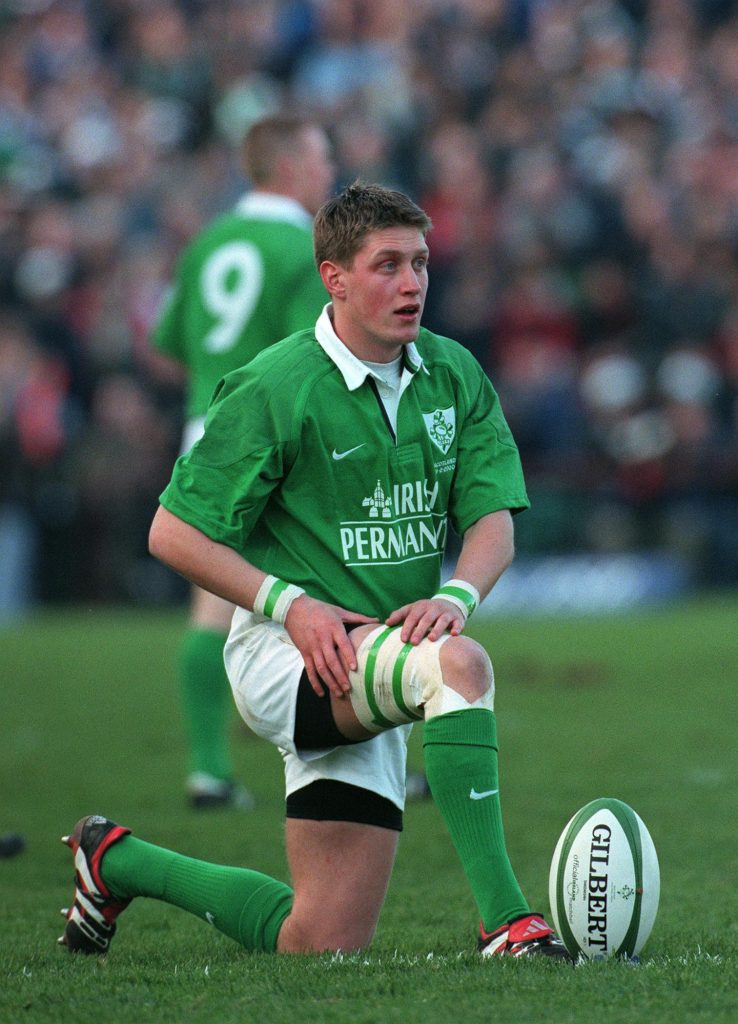 – Ronan O’Gara is the record points scorer for Munster and Ireland and the leading all-time scorer in both the European Cup (1,365 points) and the 6 Nations (557 points).

– He toured on three occasions with the British & Irish Lions, firstly in Australia in 2001 and then played one Test match apiece during the 2005 tour to New Zealand and the 2009 tour to South Africa. 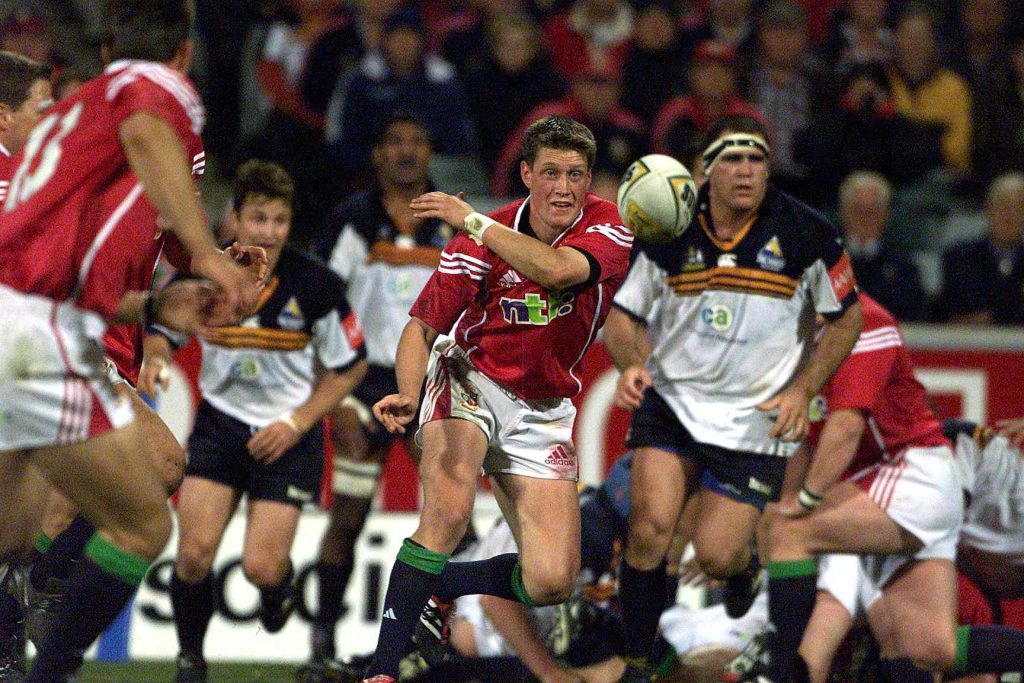 – He is the most-capped player in Champions Cup history (110 matches), and played 63 times in the 6 Nations (fourth highest of all time).

– O’Gara has been hugely influential in the red of Munster down through the years, helping them reach the 2000 and 2002 Heineken Cup finals initially before they went on to become European powerhouses.

– He landed a last-minute conversion in the so-called ‘miracle match’ against Gloucester to seal Munster’s progression to the 2003 Heineken Cup quarter-finals.

– His ability to shine under intense pressure was obvious as Munster won the Celtic League for the first time in 2003, when he scored 12 points in the decider against Neath. He also racked up 17 points in the 2005 Celtic Cup final win over Llanelli. 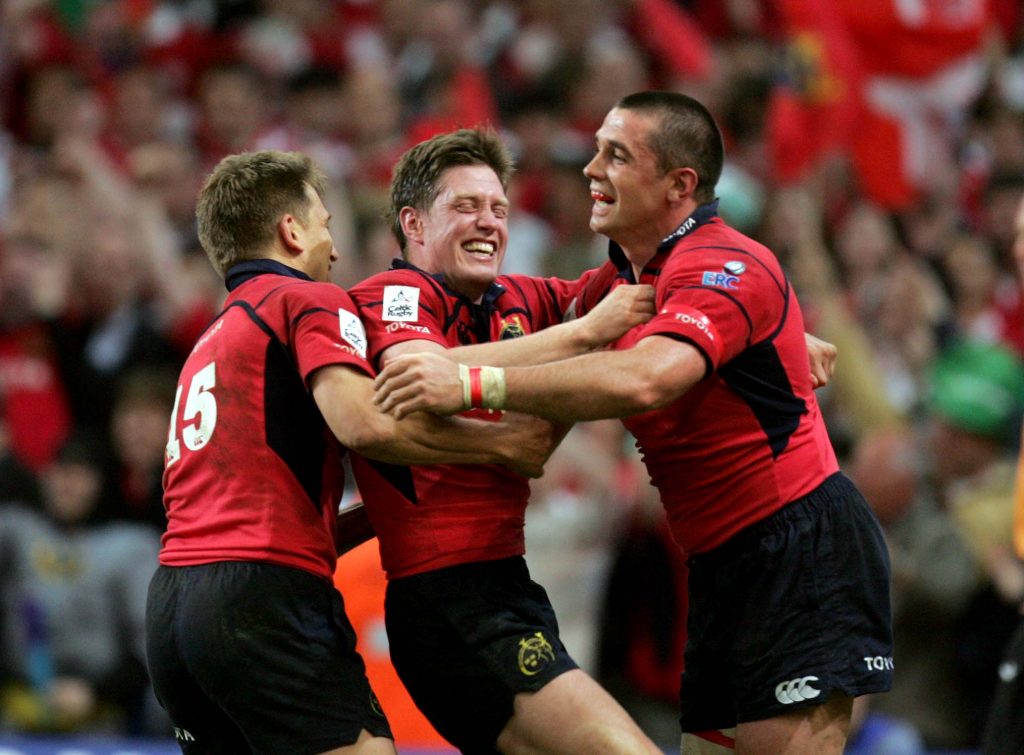 – 2006 was another year to remember for O’Gara in the Munster number 10 shirt. He starred in the Heineken Cup semi-final victory over Leinster at Lansdowne Road, running in a late try in a 20-point showing, and he then kicked 13 points as Munster were crowned European champions after they beat Biarritz Olympique in the Cardiff final.

– O’Gara collected his second Heineken Cup winners’ medal in May 2008, also in Cardiff, when Munster overcame Toulouse. He scored 11 points that day and was invited by captain Paul O’Connell to receive the trophy with him at the presentation on the pitch. 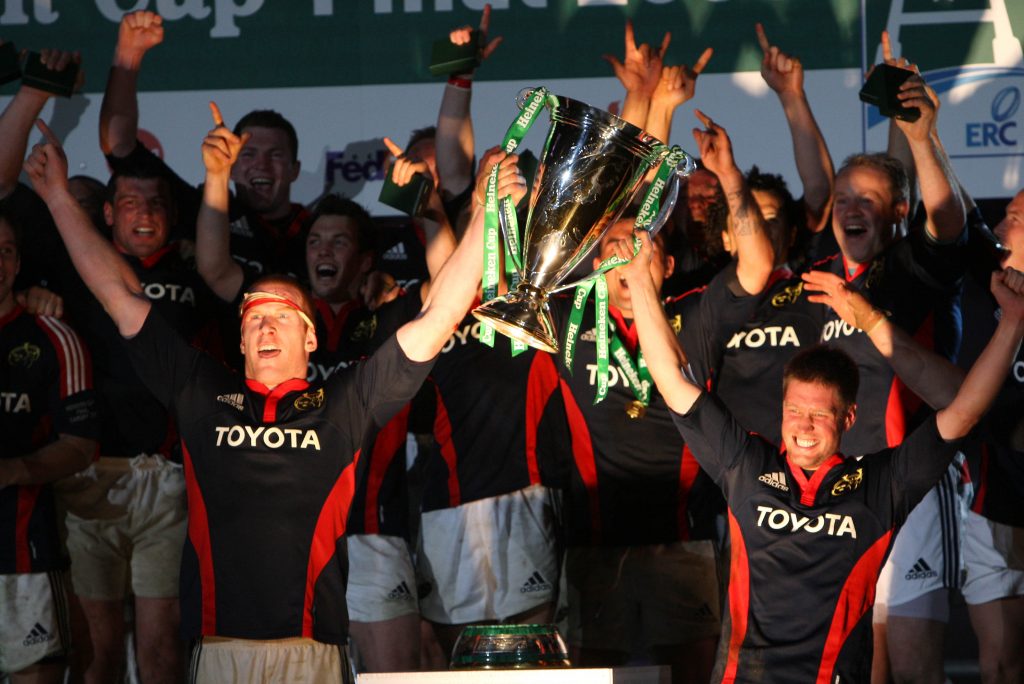 – Two years later, his Heineken Cup achievements were further acknowledged with his winning of the ERC European Player award which credited him as the player who had made the greatest contribution to European rugby during the first 15 years of the Heineken Cup.

– O’Gara’s right boot has won countless matches for province and country, his most famous strike in green being the match-winning drop goal in the Grand Slam decider in 2009. One of his most memorable kicks for Munster was the decisive drop goal after 40-plus phases against Northampton Saints in a 2011 Heineken Cup pool game at Thomond Park.

– He was to the fore during his last season of rugby with Munster in 2013, scoring all of their points in an 18-12 quarter-final win away to Harlequins before their hopes of a third Heineken Cup were dashed by Clermont Auvergne at the semi-final stage.

– He holds the record for the most points scored by an Irish player in an RBS 6 Nations match (30 points against Italy in March 2000).

– His most prolific Six Nations campaign came in 2007 when he finished the Championship with an Irish individual record of 82 points, including tries against Wales, France, Scotland and Italy and a 21-point kicking haul against England.

– He made the 2011 Rugby World Cup Dream Team as voted for by fans, having scored 44 points during the tournament (including two penalties in the historic pool defeat of Australia). 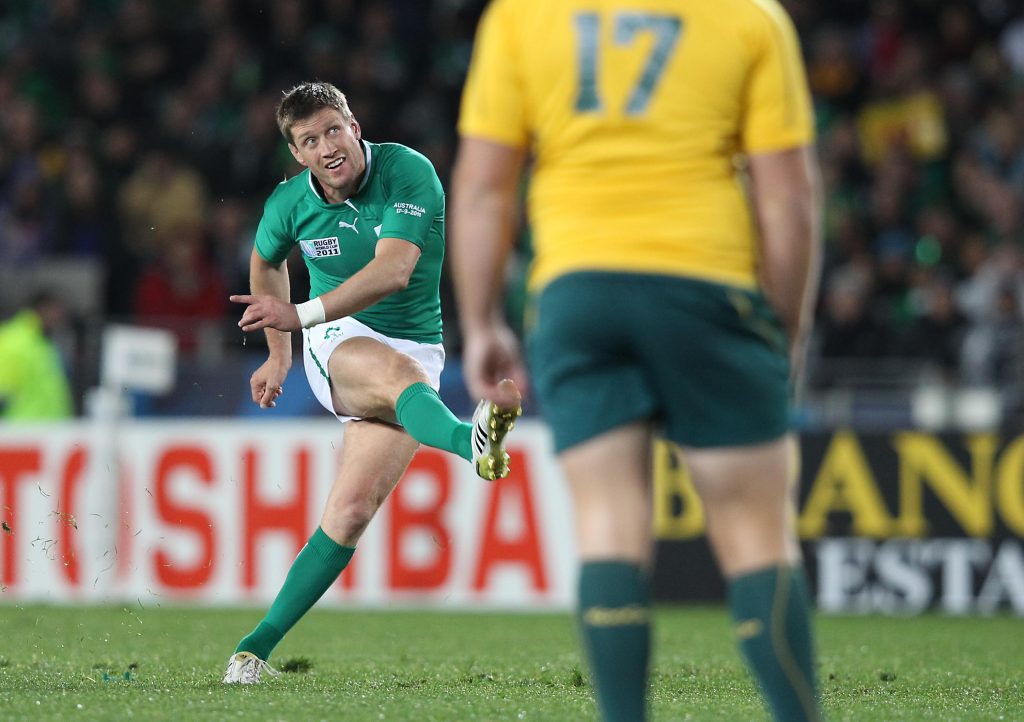 Ronan O’Gara kicks a penalty against Australia in the 2011 Rugby World Cup. Inpho

– Up until the 2012/13 season, he had played at least six games for Ireland every year since earning his first cap at the turn of the century. His busiest international campaign was in 2011 when he lined out on 13 occasions for Ireland.

– He scored 16 tries for Ireland at Test level.