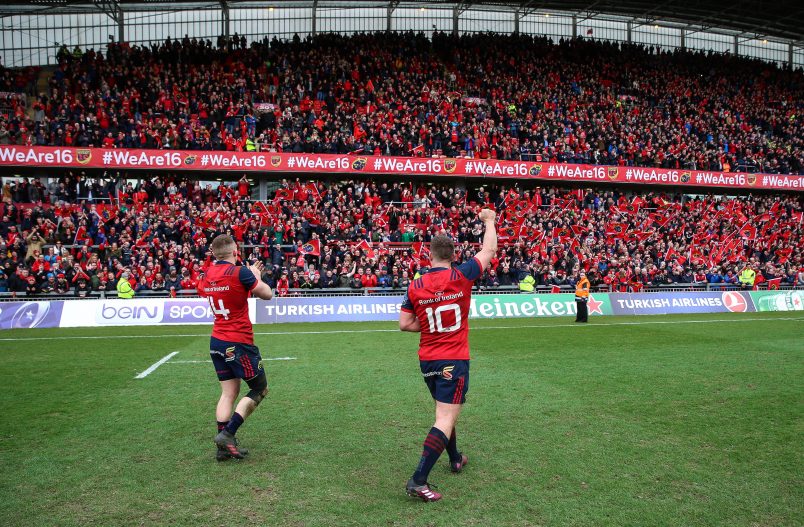 Andrew Conway and Ian Keatley salute the crowd after the 2018 Champions Cup quarter-final against Toulon at Thomond Park. Inpho

We have a midweek treat in store for Munster fans this Wednesday night with a ‘live’ screening of our thrilling Champions Cup quarter-final clash against Toulon at Thomond Park in March 2018.

The match will be shown on Wednesday at 7.30pm on Munster Rugby’s YouTube channel, you can watch it live and subscribe for free here.

Three-time European Cup champions Toulon arrived in Limerick on the back of a 49-0 victory over Clermont. The calibre of their squad was underlined by the fact that French captain Guilhem Guirado and All Blacks World Cup-winning centre Ma’a Nonu were both rested for that game.

Additional seating was installed at a sold-out Thomond Park for a 26,267 capacity crowd.

Make sure you tune in on Wednesday at 7.30pm online below. Click the link to set a reminder now.

This is our second #ClassicMunster game shown on YouTube in recent weeks with over 18,000 people tuning in to watch Munster face Sale Sharks in January 2006.

You can watch that game in full below.