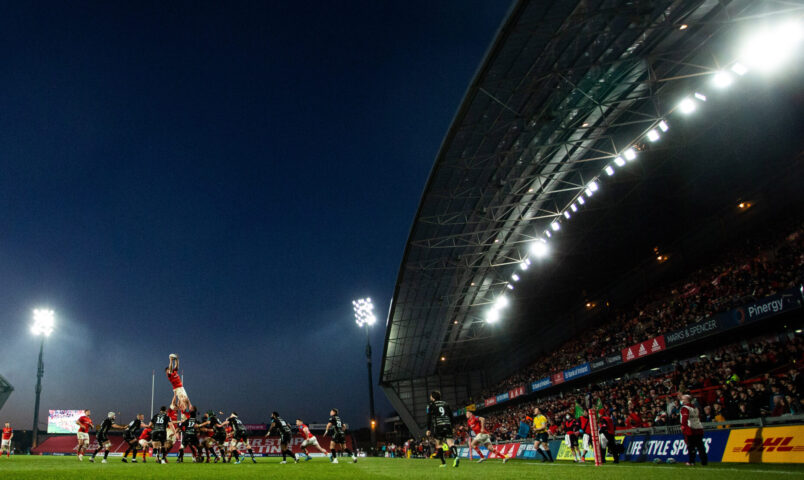 A view of a line-out at Thomond Park on Saturday evening. Inpho

The Munster travelling group for the two-game tour to South Africa departed on Sunday and arrived on Monday afternoon ahead of Saturday’s United Rugby Championship clash against the Vodacom Bulls at Loftus Versfeld in Pretoria (2.05pm Irish time/4.05pm local).

Check out score highlights, a gallery and our post-match interview with Shane Daly after the weekend’s win over Dragons here.

The Munster squad for the South Africa tour is named with details here.

We also take a look back at Saturday’s event that saw Munster Women’s player past and present celebrated at Thomond Park.

See our latest ticket update ahead of Benetton at Musgrave Park this month along with upcoming clashes with Leinster and Exeter Chiefs at Thomond Park in April.

We will have a Squad Update with the latest news from camp ahead of Munster v Vodacom Bulls on Saturday afternoon.

Our weekly remote press conference will take place from Pretoria.

We have video highlights of the second Pinergy Munster Schools Senior Cup semi-final between Crescent College and Bandon Grammar.

Read a comprehensive match preview ahead of #MUNvBUL in ‘All You Need To Know’.

We await team news from the Ireland senior men’s and U20s camps ahead of their games against England on Saturday.

The Munster team to face Vodacom Bulls will be named before noon.