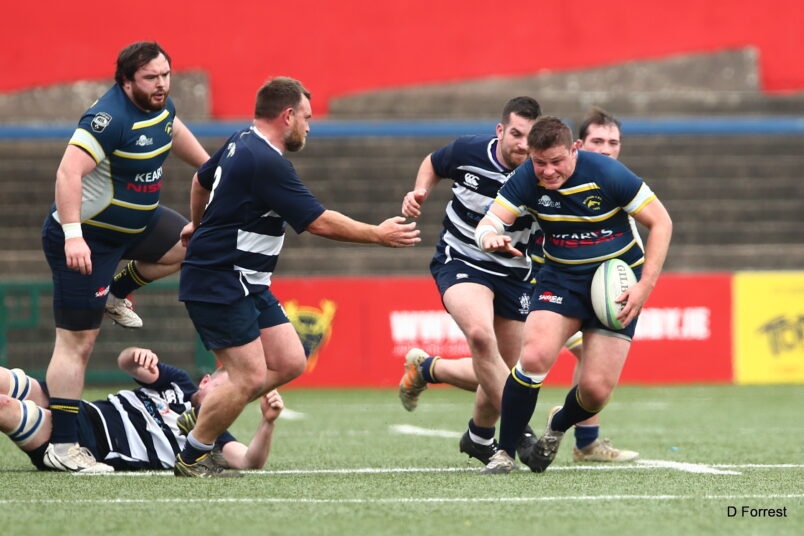 Young Munster booked their place in next week’s final of the Bank of Ireland Munster Junior Cup against Thomond at Takumi Park, as Muster Juniors lose to Connacht in the opening round of the Junior Interprovincials.

A dramatic last-minute try earned Connacht a 19-17 victory over Munster in their Junior Interprovincial at Killarney.

Twice Munster took the lead, but on each occasion, the visitors struck back to level. Keelan Stephenson opened the scoring with a try for Munster which Tadhg Bennett converted after 15 minutes. Connacht levelled ten minutes later before skipper Kevin Kinane restored Munster’s advantage with a try and Bennett converted on the stroke of halftime.

Fifteen minutes into the second half Connacht were level with a second converted try. Munster were awarded a penalty in front of the posts and kicked for the corner where the ball was touched down, but the score was disallowed as Munster had signalled a kick at goal.

Shane Airey kicked a penalty twelve minutes from time to put Munster ahead and then came the dramatic late score.

Munster will face Ulster who defeated Leinster 21-10 in Tralee in their next game next Saturday.

Young Munster proved too strong for Mallow in the second semi-final of the Bank of Ireland Munster Junior Cup 57-17 at the North Cork venue. Tries by Conor Philips, Pa Ryan, Conor O’Shaughnessy and two Shane O’Brien conversions had Young Munster 19-0 ahead after twenty-five minutes. Further tries by Jack Cosgrave and Phillips and an O’Brien conversion had the visitors 31-10 Jimmy Glynn replied with a try, conversion, and a penalty for Mallow.

It was a great week for Thurles who defeated Fermoy 45-0 earlier in the week to finish top of Section C of the Munster Junior League and followed it up with a 30-8 win over Cobh Pirates to claim the Bank of Ireland Munster Junior Plate for the sixth time at Musgrave Park. Luke Kelly scored two tries and Owen Byrne and Eoghan O’Dwyer got one each. Paddy McGrath kicked two conversions and two penalties. Cobh Pirates replied with a try and a penalty from Rory Pierce.

Dolphin claimed the Bank of Ireland Munster Junior Bowl for the first time when they defeated Waterford City 22-10 in the final at Musgrave Park. This was Dolphin’s second trophy this weekend as their third side defeated Mallow 45-27 in the Paul Twomey Cup Final on Friday night.

Carrick-on-Suir defeated Presentation 13-10 to win the Gleeson League for the first time and will now face Cork Constitution in the final of the Munster Junior 2 League. Jack Boylan scored Carrick’s try and James Daly converted and also added two penalties.

Cork Constitution regained the South Munster Junior 2 Cup defeating Bandon 27-13 in the final at Musgrave Park. Olan Dennehy scored two tries for the winners and Cyprian Jouve and Billy O’Regan got one each. Scott Deasy kicked two conversions and a penalty. Bandon replied with tries from Pietro Tozzi and Olan Crowley and Will Canavan kicked a penalty.

Check out the full results from the weekend here.