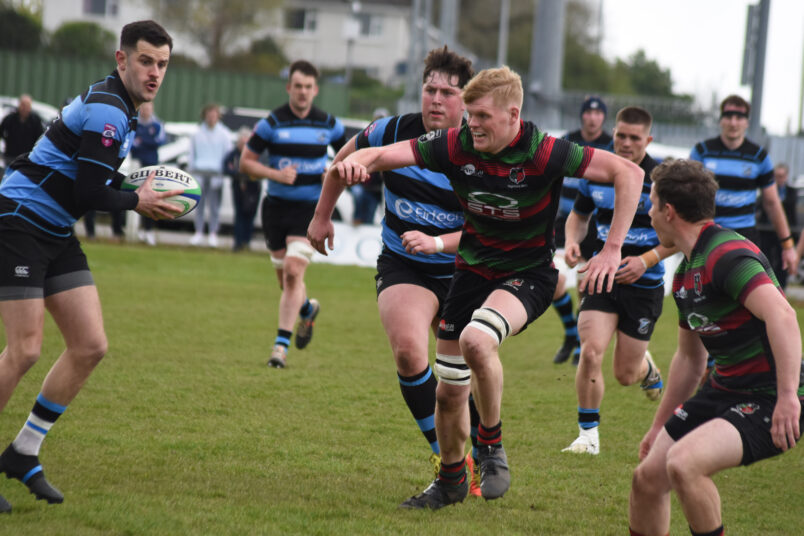 It was a bad day for the Munster sides in the All Ireland Semi-Final Play-Offs with Shannon the only side to book a final spot after winning the Munster derby at Highfield.

Clontarf proved too strong for Cork Constitution in their semi-final of the Division 1A All Ireland League winning 29-13 at Castle Avenue. In a closely fought opening half Clontarf held a 15-13 interval lead but the Temple Hill side were unable to add to their tally after the break. John Forde scored Con’s try and Aidan Moynihan kicked a conversion and two penalties.

UCC travel to Ballynahinch next week in their Division 1A relegation play-off trailing by four points after their 21-17 defeat at the Mardyke by Ballynahinch. The students trailed 15-14 at half-time and had a try, conversion, and penalty by Andrew O’Mahony. They were also awarded a penalty try.

Shannon got the better of an injury-hit Highfield side in their Division 1B semi-final encounter at Woodleigh Park 25-19. Tries either side of halftime by Jamie McGarry and Ronan Coffey proved the decisive scores. Sean McCarthy also scored a try for the visitors and Jake Flannery kicked two penalties and two conversions. Paddy O’Toole scored Highfield’s try and Shane O’Riordan kicked four penalties and a conversion.

Cashel were defeated 25-17 at home to Buccaneers in the Division 2A semi-final. Ciaran Ryan scored two tries for the Tipperary side and Brendan Ryan one, with Cian Mullane kicking one conversion.

Rainey Old Boys and Nenagh Ormond played out an exciting 17-17 draw at Hatrick Park, thus setting the scene for a thrilling second leg at the North Tipperary venue next week in the Division 2A Relegation play-off. Willie Coffey and Nicky Irwin scored tries for Nenagh and Conor McMahon converted both and also added a penalty.

Two tries, a conversion and a penalty in the final ten minutes earned Clonmel a 33-17 home victory over City of Derry and gives them a sixteen-point cushion ahead of next week’s second leg in Derry in the Division 2C relegation plat-off. Luke Hogan scored two tries for the Tipperary side and Conor Pearson and Greg Carroll got one each. Dylan Cadogan kicked three penalties and a conversion and Darren Cass also added a conversion.