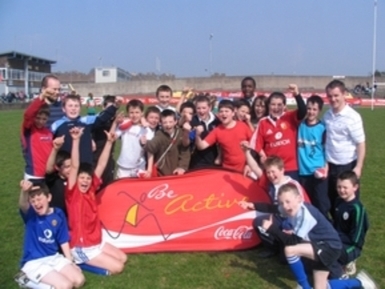 The Primary Schools Tag Rugby programme ended on a high on Tuesday the 27th of March. Twenty three schools representing all six counties in Munster gathered in Musgrave Park, to take part in the annual Munster Tag Rugby Extravaganza.

It was a great success due to the effort put in by all the students, teachers and parents. The day kicked off with the annual Nations Parade Fancy Dress, where all schools competed for the best dressed prize. Each school was allocated a rugby playing country before the day, and we saw some very imaginative costumes! The main focus of the day was on good sportsmanship and fair play, and the standard was set very high from the start, so well done to all involved.

There were three przies awarded on the day and the winners were: