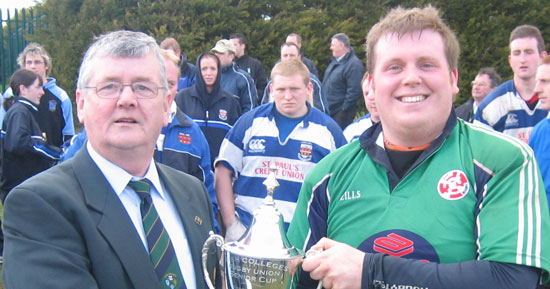 News from the Colleges Rugby scene, as Limerick IT claim the Division One title and Cork IT are pipped by the University of Ulster Jordanstown in the Division Two title.

Limerick Institute of Technology won their second Irish Colleges Final in three years when they defeated the Garda Colleges in a tough uncompromising game played at Templemore. Limerick had a cutting edge in the backs that was the difference between the two teams in this entertaining game. They outscored the Garda by three tries to one with both centres Man of the Match Paul Dillon (two) and Pat O’Connor crossing for tries. Garda had the better of the first half exchanges having dominated possession but the were unable to trouble the scoreboard with a number of easy penalty kicks missed and try scoring opportunities spurned. Limerick turned around at half time 5-0 ahead after strong running by Captain Alan Guiry who allowed out half Tadhg Bennett to make a break that set up fellow Shannon club mate Pat O’Connor for a try. Limerick got on top immediately after the break when Clonakilty man Paul Dillon scored the first of his brace of tries after strong play from Francis Brodrick and Philly O’Connor. The Garda showed great spirit and raised their game and were rewarded by a try from their outstanding Captain Adrian Hanley. This put the Garda right backing the game but even though getting parity of possession were unable to score again. Tadhg Bennett kicked a penalty to give Limerick some breathing space and a two score lead. Then in the last move of the game Paul Dillon showed his strength to score under the posts to cap a fine personal performance, Bennett added the conversion. Ken Imbusch, the Limerick Coach, complemented the Garda and their Manager Tony Wells and Coach John Lacey on the progress they have made this year in moving from being bottom of the League last year to contesting the final this year. John O’Loan President of The Irish Colleges thanked the Garda for hosting the finals for the first time and praised their facilities and hospitality.

University of Ulster Jordanstown 27-22 Cork IT

University of Ulster Jordanstown looked dead and buried when they trailed Cork IT by 16-7 at half time in the Irish Colleges Division 2 Final at The Garda College Templemore, Co Tipperary. Then three magnificent tries in the second half as a result of some scintillating back play sealed a famous victory. Colin Corkery kicked three first half Penalties and converted a Willie McCarthy try to confirm Cork IT’s dominance of a fiercely contested first half. Michael Bradford kept Jordanstown in the game with a try which was converted by Graham Taylor. The second half saw a change of tactics by Jordanstown coach and out half Michael McKeever who spread the ball along the backs from even inside their own 22. The move of Ballymena’s Peter Budina from wing to centre was the key to victory. Budina used his scintillating pace and class to carve open the Cork defence and set up Jonathan Stewart for two tries. Corkery kicked two further penalties to level the scores with ten minutes left. Jordanstown Captain Andy Dunbar and Michael McKeever worked a bit of space on the own ten metre line and Man of The Match Budina did the rest to score the winning try. Cork put in a massive effort to try and win the game and pressed the Jordanstown line relentlessly for the last eight minutes but were unable to score. The Ulster boys put their bodies on the line time and time again and James Taggart, Matt Irvine, David Irvine, Michael Davidson, Bradford and Carl Rushe were magnificent and they held on for a great victory.