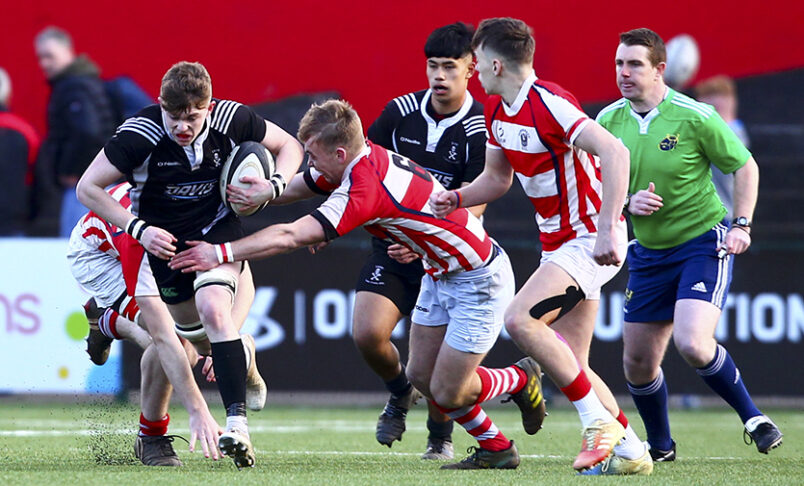 The six Bank of Ireland Munster Club age-grade boys’ competitions have reached the halfway mark of the group stages.

As things stand in the Munster Club Under 18 Cup, Ennis lead their section with 10 points and Cobh Pirates are behind them in second place on eight points. The Pirates are unbeaten with a game in hand.

Clonakilty have made it three wins from three in their group, with Nenagh Ormond behind them in second place.

Kinsale, Bruff and Waterpark are joint leaders in their group on eight points, apiece while the Suirsiders have a game in hand.

Young Munster, who are third in their section, look best-placed to take the eighth quarter final spot as they have eight points to their credit.

In the Munster Club Under 18 Plate, Fermoy who lead their section, are unbeaten on 12 points with a game in hand and have all but secured their place in the quarter finals.

Their nearest challengers are Chorca Dhuibhne and Charleville who are second and third respectively. The West Kerry Gaeltacht side are on ten points and Charleville are on eight points.

Fourth-placed UL Bohemian are two points clear of Cork Constitution, who recorded their first win of the campaign against Chorca Dhuibhne last time out, to boost their chances of making the quarter finals.

Unbeaten Waterford City lead their section on ten points. Bantry Bay, Carrigaline-Dolphin and Shannon are tied on eight points apiece, while the Limerick side are unbeaten with a game in hand.

Fifth-placed Kanturk have two games left with a lot of ground to make up if they are to reach the quarter finals.

Skibbereen and Dungarvan occupy the top two slots in their group in the Munster Club Under 18 Bowl. Any two from Old Christians, Listowel-Tralee or Clanwilliam could also qualify as these sides are tied on four points each. The Tipperary Town Club also have a game in hand.

Cashel-Thurles and Youghal share pole position in their group with Crosshaven behind them on four points. Ballincollig and Newport, who are both on zero points, meet at the Tipperary venue, where a win will boost either side’s aspirations of making the quarter finals.

Cobh Pirates lead their section in the Munster Club Under 16 Cup. Kinsale, Ennis and Chorca Dhuibhne are also in the running for a quarter final place as they are all tied on eight points apiece in second place.

Bruff hold a four point lead over Killarney and Clonmel, who are joint second on eight points each.

Waterpark are in pole position in their group on 12 points, with Dolphin and Killorglin-Iveragh Eagles sharing second place on six points apiece. Dolphin have a game in hand.

In the Munster Club Under 16 Plate, Clonakilty Red lead their section on 12 points. Cashel, Ballincollig, Tralee and Shannon are locked in a four-way tie in second place on eight points each. Cashel have played four games, while Clonakilty, Ballincollig and Tralee have each played three. Shannon are unbeaten in their two games to date.

Young Munster are on top in their group with 12 points and Clonakilty Green are second on eight points with a game in hand. Abbeyfeale-Listowel are third on six points. Old Christians and Bantry Bay are level on four points, playing for the last remaining quarter final spot.

Dungarvan, St Mary’s-Richmond-UL Bohemian, Clanwilliam-Galbally-Kilfeacle, Douglas-Muskerry, Newcastle West and Cork Constitution occupy the quarter final places in their respective groups in the Munster Club Under 16 Bowl. Five sides are best-placed to take the remaining two slots as they are all tied on four points in third place in their respective group. They are Castleisland, Mitchelstown, Bruff B, St Senan’s and Shannon B.

Sides that do not qualify for the above quarter finals have the following consolations.

Clubs that fail to qualify for the quarter finals of the Plate and Bowl completions will contest Development Plates for their respective age grades.

Elsewhere, the draw was recently made for the Bank of Ireland Munster Club age-grade girls competitions, details of which you can find here.