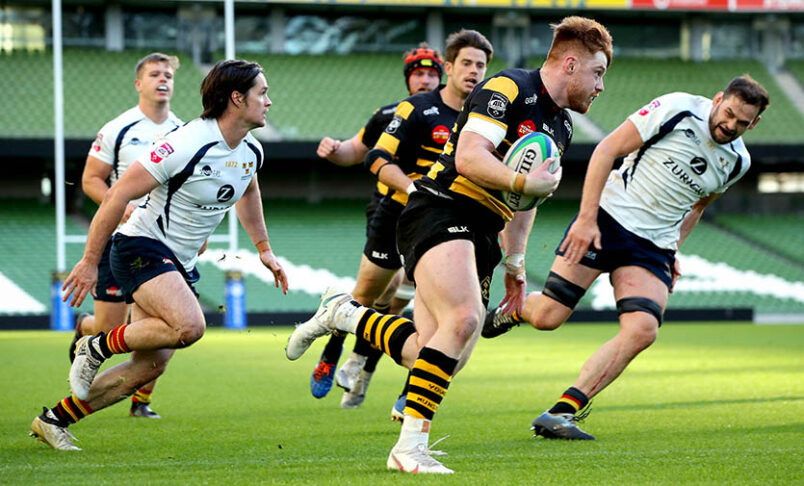 Five of the six Munster clubs in Divisions 1A and 1B of the All Ireland League recorded wins as the league resumed after last week’s break.

In the top game of the day in Division 1A, Young Munster defeated Lansdowne 24-20 at the Aviva Stadium. Conor Hayes was the hero for “The Cookies “ scoring three tries. Evan Cusack converted all three and added two penalties.

Leaders Garryowen continued their unbeaten run with a 27-22 away win at Ballynahinch. The Light blues led 24-0 at half time with two tries from Pat O’Toole and one by Jack Daly. Tony Butler converted all three tries and also added a penalty. Garryowen’s only score after the break was a second Butler penalty.

UCD. beat UCC 40-31 at Belfield in a game that produced eleven tries. Matthew Bowen scored three for the Cork students and Luke Kerr and George Coomber got one each. Billy Kiernan converted three of the tries.

In Division 1B, a late penalty by Shane O’Riordan earned Highfield a hard earned 20-17 victory over Malone at Gibson Park. Robert Murphy, Miah Cronin and Travis Coomey scored tries for Highfield and O’Riordan kicked a conversion to keep Highfield in top spot on points difference from Old Wesley.

Nenagh Ormond recorded their first win of the campaign in Division 2A with a 22-11 home win over UL Bohemian in their basement clash. Fionn McGibney and Harry Byrne exchanged penalties in the opening minutes before a try from Rob Buckley, converted by McGibney edged the Tipperary side ahead. A second penalty from Byrne left the half time score 10-6 in favour of Nenagh. Peter Coman and Derek Corcoran added further tries with McGibney converting the latter. Bohs’ only answer was a try from Teddy Rowsome 11 minutes from time.

Despite being 21-3 down after 25 minutes, Dolphin staged a great fight back but lost 26-20 at home to Ballymena. Cameron O’Shaughnessy opened the scoring with a penalty for Dolphin but the visitors responded with three converted tries. A try by Sam Boyle converted by O’Shaughnessy brought Dolphin back into the game just before half time. Tries from Murray Linn and Cian Scott in a seven minute spell just after the break closed the gap to a point but Ballymena scored a bonus point try twelve minutes from time.

Old Crescent stay rooted to the bottom of the table after they lost at home to Buccaneers 34-20. Dan Hurley and Kevin Doyle were two of Old Crescent’s try scorers and Ronan McKenna kicked a penalty and a conversion.

The Cashel v Old Rainey game was called off because of Covid and both sides will be awarded two points each with an 0-0 result been recorded.

Midleton won the Munster derby at home to Bruff in Division 2C, winning 28-15. Bruff led 12-9 at half time with two tries from Mark Fitzgerald and a conversion by Adam O’Dwyer to three Stuart Lee penalties. Bryan Moore, Dave O’Sullivan and Shane Anderson scored tries after the break for the home side and Lee converted two. O’Dwyer replied with a penalty for Bruff.

Clonmel lost at home to Skerries 24-0 and bottom side Omagh Academicals defeated Sunday’s Well 36-8 to leave the Cork side propping up the table. Ryan Buckley scored a try for the Well and Eoin Geary kicked a penalty.

In the Women’s All Ireland League neither of the Munster sides played. The Ballincollig v Railway Union game was postponed because of Covid issues and the UL Bohemian game against Wicklow was called off.

All Ireland League Division 1A: