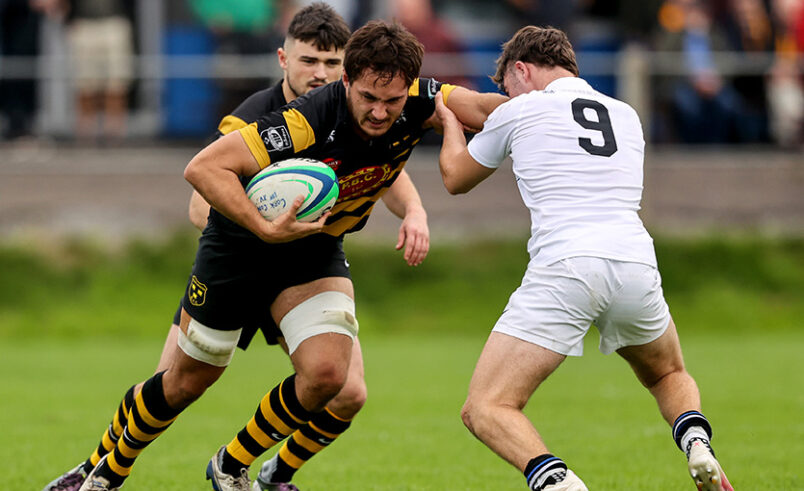 In Division 1A of the Men’s All Ireland League, fourth-placed Cork Constitution welcome Lansdowne, who are seventh to Temple Hill. The Leesiders will be looking to make the most of home advantage count as they aim to build on their maximum-point 36-31 away win over UCD. The Dublin side are seventh, following their 32-12 home defeat by Terenure College.

Shannon face a tough assignment after claiming all points on offer from their Limerick derby against Garryowen last week, as they travel to the Capital to take on Dublin University. The Dublin Students have slipped to third, following their 38-33 defeat by Clontarf, from which they claimed two bonus points as they scored four tries.

Garryowen lock horns with UCD in a basement clash at Dooradoyle as both sides go in search of their first win. UCD claimed two bonus points, as they scored four tries in their 36-31 defeat by Cork Constitution last time out, while the Limerick side, who are now propping up the table, have a single losing bonus point from their 26-23 defeat by Young Munster.

Young Munster, who have slipped to sixth, following their 25-20 defeat by Ballynahinch in County Down, face a tricky task as they entertain second-placed Clontarf at Tom Clifford Park. Clontarf ran out 38-33 winners over Dublin University at Castle Avenue last time out.

The game of the day in Division 1B is the top of the table clash between Buccaneers and UCC at Dubarry Park. The Leeside Students were defeated for the first time in their last game against Naas at the Mardyke, but finished with a losing bonus point and slipped to second. The Athlone side have moved into pole position as they returned from Belfast with all points on offer from their 35-18 win over Malone.

Highfield, who are hovering above the drop zone following three successive defeats, entertain fourth-placed Old Belvedere at Woodleigh Park. Highfield were defeated 31-19 by City of Armagh at the Palace Grounds, while Old Belvedere recorded a 31-24 maximum point win over Old Wesley in a Dublin derby.

In Division 2A, Dolphin, who are hovering above the drop zone, will have their work cut out as they aim to record their third straight home win, as they entertain third-placed Cashel at Musgrave Park. Dolphin were defeated 27-15 Nenagh Ormond in North Tipperary last time out, while Cashel put up 27 points without reply at home to Ballymena.

Old Crescent, who recorded their first win in a Limerick derby against UL Bohemian, welcome fifth-placed Nenagh Ormond to Takumi Park. The Limerick side will be looking to make the most of home advantage as they aim to build on their win over UL Bohemian, while the North Tipperary side go into the tie on the back of a 27-15 home win over Dolphin.

UL Bohemian, who are now propping up the table, face a tough assignment, as they welcome leaders Queen’s University, to the UL Arena. The Limerick side claimed their third losing bonus point against Old Crescent, while the Belfast Students played out a 24-24 draw with Navan in County Meath.

Bruff, who are sixth in Division 2C following their 43-12 home win over Ballina, face a tricky task as they travel to Belfast to take on leaders Instonians, who have maximum points from their five games to date.

Clonmel, who are seventh following their 33-12 home win over Bangor, from which they claimed all points on offer, travel to North Mayo to take on Ballina, who are propping up the table. Ballina are on a single losing bonus point from their opening day defeat to Bangor.

Midleton, who are hovering above the drop zone, following two successive defeats, will have their work cut out as they travel to County Down to take on Bangor, with both sides going into the tie on the back of defeats against Skerries and Clonmel respectively.

Sunday’s Well face a tough assignment following their heavy 50-5 defeat by leaders Instonians at Musgrave Park, as they travel to County Offaly, to take on second-placed Tullamore. The Leesiders’ only points came from their 27-9 home win over Ballina, while the Faithful County side go into the tie on the back of a 27-12 away win over Omagh Academicals.

In the Women’s All Ireland League, UL Bohemian travel to Belfast to take on bottom side Cooke, who are on zero points. UL Bohemian ran in seven tries in their comprehensive 43-5 victory over Suttonians at Castletroy College, while Cooke were defeated 20-10 by Wicklow in their last game.

Ballincollig travel to the JJ McDowell Memorial Grounds, to take on Suttonians, with both sides going into the tie on the back of heavy defeats by Blackrock College and UL Bohemian respectively.

There is full program of games in both the Munster Junior League and the Women’s Munster League.

Third-placed Skibbereen and fourth-placed Kilfeacle get the show on the road in Section A of the Munster Junior League on Saturday at the Carbery Showgrounds. The West Cork side, who surrendered their unbeaten record against St Mary’s last time out, will have their work cut out as Kilfeacle claimed maximum points from their 25-7 win over Abbeyfeale.

On Sunday, the meeting of Thurles and Mallow at the Mid Tipperary venue doubles up as a Munster Junior Clubs’ Challenge Cup first Round tie. Mallow are joint fifth following their 26-10 home win over Crosshaven, while Thurles were defeated 21-7 by Clonakilty in West Cork. The winners will be away to Richmond in the quarter finals of the Munster Junior Club’s Challenge Cup.

Muskerry face a tough assignment following their 14-6 away defeat by Old Christians, as they welcome leaders Richmond to Ballyanly. Richmond are the only unbeaten side in this section of the League as they ran out 16-13 home winners over Newcastle West last time out. The Mid Cork side’s only win to date was their opener against St Mary’s.

Newcastle West will be looking to get back to winning ways, following their narrow 16-13 away defeat by Richmond, as they welcome Clonakilty to West Limerick. The West Cork side go into the tie on the back of a 21-7 home win over Thurles.

Bandon, who recorded a 24-17 home win over Waterpark entertain bottom side Abbeyfeale, who were defeated 25-7 by Kilfeacle in West Tipperary. Abbeyfeale are on a single losing bonus point from their 10-7 defeat by Clanwilliam at the Tipperary venue.

Waterpark, who claimed a losing bonus point from their game with Bandon in West Cork, are at home to Old Christians, who recorded their first win of the campaign against Muskerry.

Thomond and Crosshaven, who both lost their last games against Clonakilty and Mallow respectively, lock horns at Liam Fitzgerald Park. The Limerick side claimed a losing bonus point from their narrow 28-27 defeat by Clanwilliam and their only win to date was their opener, which they won 24-20 at home to Clonakilty.

Fethard, who are unbeaten leaders in Section B should prove too strong for Dungarvan in their encounter at the Fethard Community Sportsfield. The South Tipperary side recorded a narrow 19-17 away win over Galbally-Mitchelstown, while Dungarvan were defeated 19-3 at home by Waterford City.

Galbally-Mitchelstown will be looking to get back to winning ways following their narrow 19-17 home defeat by Fethard, from which they claimed a losing bonus point, as they travel to East Cork, to take on Youghal. The Seasiders were defeated 24-12 by Scariff in East Clare.

Third-placed Cobh Pirates entertain Fermoy, who are joint fourth, at the Paddocks. The Pirates go into the tie on the back of a 27-9 bonus point away win over Carrick-on-Suir, while Fermoy ran out 25-13 home winners over Scariff.

Bottom side Ennis go in search of their first win as they entertain neighbours St Senan’s in a Banner County derby. Ennis claimed a losing bonus point from their last game which they lost 18-15 to Youghal in East Cork, while St Senan’s go into the tie on the back of a 24-12 maximum point win, which was also against Youghal.

Waterford City, following their 19-3 away win over Dungarvan, are at home to Carrick-on-Suir. Carrick go into the tie on the back of a 27-9 defeat by Cobh Pirates in East Cork.

Tralee welcome joint leaders Charleville, who are unbeaten in Section C, to the Kingdom. Tralee will be looking to make the most of home advantage count in a bid to get back to winning ways following their 31-22 defeat by Kanturk in Duhallow. Charleville go into the tie on the back of a comprehensive 40-7 home win over Douglas.

Kinsale travel to Castletreasure to take on near neighbours Douglas in a South Cork derby. Kinsale claimed all points on offer from their 27-10 home win over Killarney and should prove too strong for Douglas who were defeated 40-7 by Charleville last time out.

Ballincollig, who recorded a 24-7 maximum-point home win over Killorglin, travel to the Kingdom to take on Killarney, who were defeated 27-10 by Kinsale at the South Cork venue.

Killorglin and Castleisland both go in search of their first win in Mid Kerry. Killorglin were defeated 24-7 by Ballincollig at Tanner Park last time out, while Castleisland narrowly lost 7-3 at home against Kanturk.

In Conference A of the Women’s Munster League, UL Bohemian go head to head with Shannon-LIT at Annacotty. Shannon-LIT will have their work cut out as they look to build on their narrow 17-12 win over Kerry last time out. UL Bohemian picked up maximum points from their 20-5 away win over Skibbereen and they won October’s corresponding fixture at Coonagh 24-12.

On Sunday, Skibbereen who are propping up the table on a single losing bonus point, entertain Kerry at the Carbery Showgrounds. Both sides go into the tie on the back of defeats by UL Bohemian and Shannon-LIT respectively. Kerry ran out 37-27 winners when these sides met in Tralee, resulting in a losing bonus point for the West Cork side.

Ballincollig will have their work cut out as they go in search of their first win against Waterpark at Tanner Park, following their heavy 52-7 home defeat by Thurles. The Suirsiders finished with maximum points when these sides met in October as they put up 28 points without reply at Ballinakill.

Leaders Thurles will have their work cut out as they entertain Ennis-Kilrush, who defeated Ballincollig 48-10 to record their first win of the campaign. Thurles go into the tie on the back of a 52-7 away win over Ballincollig. Thurles also recorded a 30-5 bonus point win when they met Ennis-Kilrush in the Banner County.

Dolphin, who are unbeaten at the top of Conference C, entertain Mallow, against whom they put up 54 points without reply in their opener in North Cork in October. Dolphin recorded a 17-7 home win over Bantry Bay, while Mallow recorded their first win, defeating Midleton 19-0.

Bantry Bay will be looking to get back to winning ways following their 17-7 defeat by Dolphin at Musgrave Park as they welcome Midleton, who are propping up the table on zero points. Midleton were defeated 19-0 by Mallow in North Cork last time out, and Bantry Bay won the corresponding fixture 43-7 in East Cork.