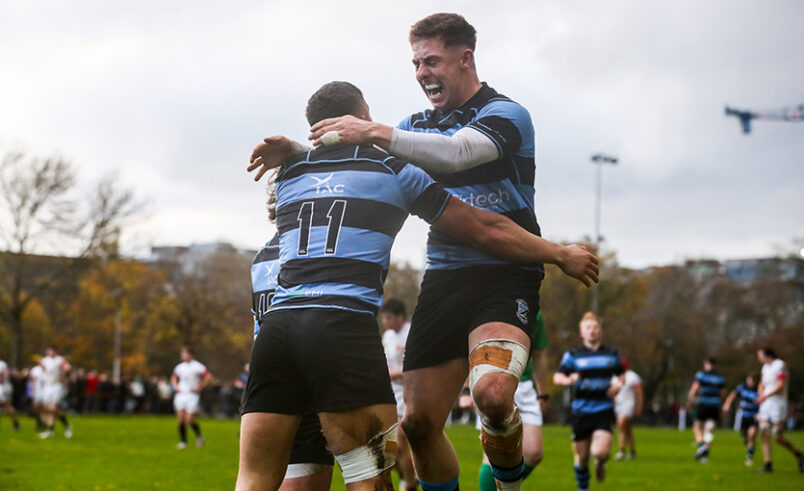 Cork Constitution and Young Munster remain in the hunt for playoff places in Division 1A of the All Ireland League, following excellent victories.

Young Munster caused the shock of the day with a 24-19 win over second place Clontarf at Tom Clifford Park. Trailing 16-10 at half-time, two second-half tries by Pa Ryan and Dan Walsh converted by Evan Cusack and Conor Hayes earned the home side victory. The winners were awarded a penalty try in the opening half and Cusack kicked a penalty.

Garryowen remained rooted to the bottom of the table after their 47-22 defeat by U.C.D. at Dooradoyle. JJ O’Neill scored two tries for the Light Blues and Nick Greene got one. Jack Oliver kicked two conversions and a penalty.

Division 1B leaders Buccaneers maintained their lead with a convincing 29-0 home win against second-placed UCC.

Highfield got back into contention for promotion with a 21-10 home win over Old Belvedere. Richard Cassidy, Cian Bohane, and Miah Cronin scored tries for Highfield and Shane Buckley converted all three tries.

Cashel recorded a 24-19 away win over Dolphin to record a bonus point win in Division 2A to maintain their promotion challenge, while Dolphin slip into the relegation zone. In a rip-roaring opening half Dolphin led 19-17 at the interval, with tries from Barry Fitzgerald, James Rochford, and Rob Reardon. Tomas Quinlan kicked two conversions. Cashel had two tries from Brendan Ryan, with Niall Fitzgerald and Alfredo Bergada also scoring tries. Josh O’Dwyer kicked two conversions.

In Division 2C, Clonmel who were in relegation trouble a few weeks ago moved into the play-off places with a 29-15 away win at bottom-side Ballina. Jason Monua scored two tries for the Tipperary side and Brian O’Dea got one. Dylan Cadogan kicked four penalties and a conversion.

Tries from Shane Duggan and Pa Maher both converted by Paul Collins gave Bruff a 14-0 early lead away to runaway leaders Instonians, but the Ulster side came out 36-28 winners. Tony Cahill, and Kieran Bennett also added tries to earn Bruff a four-try bonus point. Collins converted both tries.

Fabien Loughery gave Sunday’s Well an early 3-0 lead with a penalty, but second placed Tullamore hit back to win 29-10. Shane Keevers scored a late try for the ‘Well and Loughery converted.

UL Bohemian staged their best performance of the season with a 55-12 away win at Cooke in the Women’s All Ireland League. Alana McInerney and Ciara O’Dwyer each scored two tries for the visitors and Eilis Cahill, Clara Barrett, Clodagh O’Halloran, Kate Flannery, and Aoife Corry got one each. Nicole Cronin kicked four conversions and Flannery one.

Tries from Denise Redmond and Tiara Siguenza were not enough for Ballincollig who lost 24-12 away to Suttonians. Redmond kicked one conversion.