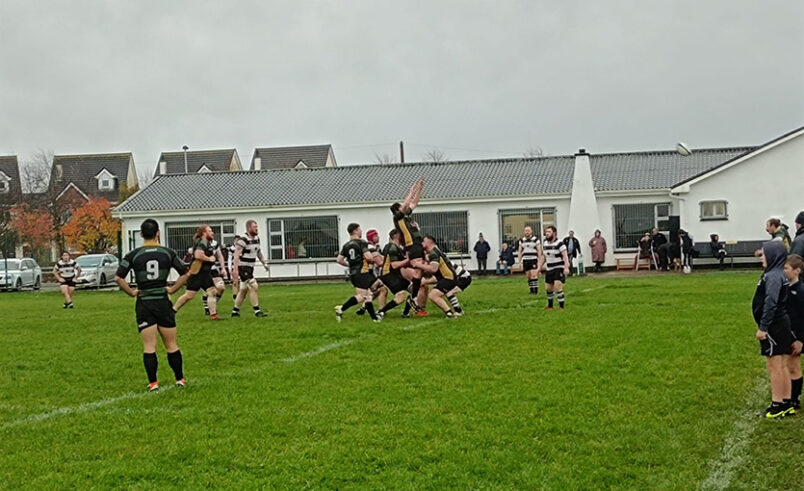 The majority of games in the Munster Junior League went ahead, despite some postponements due to weather.

Leaders Richmond the only unbeaten side in Section A of the Munster Junior League lost that record when they went down 14-7 at Ballyanly to Muskerry. The home side raced into a 14-0 halftime lead with a try from Mike Dillane and three penalties by Rob Cahill. Jeff McNamara replied with a try for the Limerick side and Tadhg Bennett converted.

Bandon recorded their first bonus point win of the campaign to move into joint second place in the league, five points behind Richmond after their 43-19 away win at Abbeyfeale. Gearoid O’Leary, Matthew Crowley, James Collins O’Brien, Ben Ridgeway, Tom Ferguson, and Tadhg Galvin scored tries for Bandon, and Ridgeway kicked five conversions and a penalty. Abbeyfeale replied with two tries from Jacques van Wyngaardt and one by Jamie O’Sullivan, with Roman Quirke converting all three tries.

Kilfeacle are level with Bandon after their 17-15 away win in Skibbereen. Luke Heuston, Darren Lowry, and Brian McLoughlin scored tries for Kilfeacle and Heuston added one conversion. David Shannon and Tom Beard replied with tries for Skibbereen and Shannon kicked a conversion and a penalty.

Mallow also brought themselves back into the race for the title with a 13-10 away win in Thurles. Sam Glynn and Yasushi Katsuta scored tries for Mallow and Dave Cogan added a penalty. Thurles replied with a Sonny Dwyer try and a conversion and a penalty by Paddy McGrath.

Newcastle West’s home game with Clonakilty was postponed due to a bereavement in the Clonakilty club.

Thomond edged out Crosshaven 24-21 at Liam Fitzgerald Park. Dean O’Brien scored two late tries for Thomond, and Conor Radcliffe got one, with Eoghan Sherlock converting all three. Killian Markham kicked a penalty. Crosshaven had tries from Graham Smith and Joe O’Brien, and Jack O’Connell kicked a conversion and three penalties.

Clanwilliam edged out St. Mary’s 15-13 at Clanwilliam Park. Micheál Sharpe and Ben Downey were try scorers for Clanwilliam and Niall Leahy added a conversion and a penalty. Gareth Moore had a try for Mary’s which Jazz Pendejito converted and also added two penalties.

In Section B the games at Cobh and Youghal were both postponed as a result of the weather.

Waterford City maintained their challenge for promotion with a 27-18 home win over Carrick-on-Suir. Aidan O’Neill, Andrew Condron, and Seaghan Walsh scored tries for Waterford, who were also awarded a penalty try. Noah Mellors kicked a conversion and a penalty. Ryan O’Donoghue and Tom Reid replied with tries for Carrick. Fionn Barry kicked two penalties and a conversion.

Ennis moved off the foot of the table as they shared the points with neighbours St Senan’s 27-27 with a dramatic last-minute penalty. Cian Guilfoyle scored two tries for Ennis, Dylan Kenny and Oisin Mangan got one each, with Mangan kicking two penalties and a conversion. Martin Corbett replied with two tries for Senan’s and Feargal Lawlor got one. Declan Rowe converted all three tries and kicked two penalties.

Kinsale went top in Section C as a result of receiving a walkover from Douglas.

Kanturk and Charleville are a point behind after both clubs recorded victories.