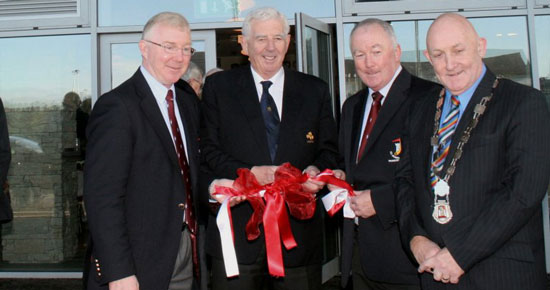 Little did the men who represented Bohemians and Young Munster in the unfenced field at Hassett’s Cross on 17th November 1934, imagine that the following 74 years would make Thomond Park (as it was later named) one of the best known rugby grounds in the world.

It has witnessed many exceptional rugby events since that first game and Bohemians, who have been tenants for 70 years, have been central to many of them. In the mid 1950s, Dom Dineen (later to become President of the IRFU), designed the first Bohemian Clubhouse under the stand.

At that time Mr Dineen held the role of club trainer. He was fortunate to have under his command an exceptionally talented group of young men and on Friday 28th November, officers and members gathered to honour that Bohs squad of 50 years ago who commenced a golden run of cup and league victories. In attendance were most of the survivors from that era, including Bill Mulcahy, former Irish Captain and Lion, and Mick English another Lion who was recently inducted into the IRFU Hall of Fame. They were joined by team mates and internationals Maurice Mortell and Sean McHale, while the distinguished guests included the President of the IRFU, John Lyons and UL Bohs own former IRFU President, Dom Dineen.

The following day the club’s new premises in Thomond Park were officially opened by the Deputy Mayor, Cllr Kieran O’Hanlon – whose father played for Bohs in that first ever game in Thomond Park – and John Daly, IRFU President. Mr Daly remarked that the ground was now indeed officially opened, since he had performed a similar ceremony on the other side the previous week when Munster had played that enthralling game against The All Blacks, only to lose in the dying seconds.

The clubhouse was blessed by the Rev Donal McNamara of St Munchin’s and Dean Sirr of St Mary’s Cathedral. The prayers may well have helped bring home success in the game which followed, when UL Bohs avenged their defeat at the hands of Young Munster in that 1934 contest. A very enjoyable lunch saw gifts exchanged between the Presidents, Mick Goggin of UL Bohs and Declan Edwards Young Munster, as well as the IRFU.