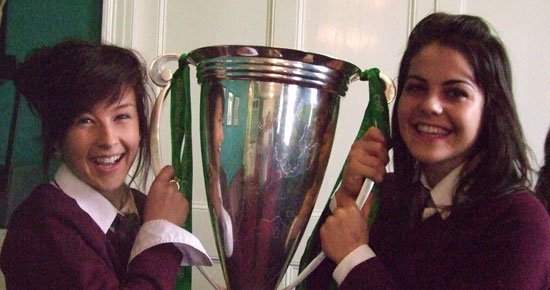 After a highly successful schools blitz targeted at the women’s game in second level schools held in Garryowen FC recently, the visit of the Heineken Cup to Laurel Hill reinstated Limerick City as a growing hub of women’s rugby.

Laurel Hill are embracing rugby, although the sport is new to them, there is a desire to learn new skills and take part in a fun and exciting sport. Ciara Ronan, Sports Co-ordinator and avid Munster fan is keen for the game to grow and prosper and wants the school to participate in school blitzes and like their hockey counterparts – bring home some silverware."

With the announcement from the IRB that they have appointed its first ever Women’s Development Manager, Susan Carty, the former President of the IRFU Women’s Rugby Committee, there is significant excitement around the ever increasing growth of the women’s game here in the province.