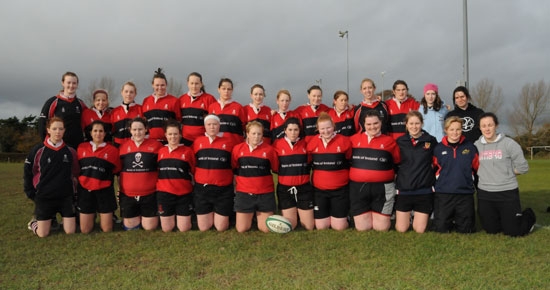 UCC Ladies travelled to Galway for the second round of the Division 1 College League to take on NUIG.

UCC started slowly as in their previous game and faced tough rearguard action on their own 22 for the first ten minutes. A skilful turnover in the ruck by front row Orlagh Ryan gave UCC the opportunity to display their passing as number of quick wide passes reached centre Eimear Knightly who kicked downfield. It was chased by winger Aoife Deasy on the wing who collected the ball of the deck and following a full pitch sprint she touched down under the post. Conversion was missed it was 5-0 to College and game on. NUIG were not relenting the constant pressure in UCC territory, it was a tough physical game being contested on the half way line. Again another turnover, this time by the impressive flanker Jane O’Rahelly, with another solid display of hands, the ball was given to winger Roisin Fahey who had a magnificent individual effort touching down under the posts on the 25th minute, as the Galway defence was again ripped apart by a UCC wingers pace. Knightly, this time slotted the conversion bringing the score to 12-0. UCC’s forwards showed a heartfelt display with impressive rucking, aggressive tackling with gave the backs many opportunities on numerous times which the backs gratefully accepted.

NUIG restarted the game with renewed pressure and made many line breaks which were excellently stopped by some last minute tackling; most notably by fullback Freda Casey who was determined that the Galway try line would not be reached. With the Galway number 8 always a threat off rucks and scrums UCC had to stay on their toes and some passionate defending on their own line lead to the half ending 12-0. The aggressive tackling and organised defence worked on in training, obviously paying dividends.

UCC formed up a huddle in buoyant mood at half time but Coach, Theresa Nolan restored focus as she pointed out there was another half to play and that is was all still to play for. Determination to score was prevalent, from one to fifteen.

The second half began exactly as the first with Galway eager to prove a point on home turf. Once again UCC’s defence held well and absorbed much of the pressure and big hits. Following a harsh yellow card for Casey, Galway exploited an overlap to touch down for a try in the corner. Conversion was missed leaving the score 12-5.

This score galvanised the UCC team and the need to extract revenge was evident from the kick-off as they immediately turned over possession. The rucks were cleared out aggressively and the tackles were being made, keeping the ball in close UCC made some serious yards, most notably Ryan and O’Rahelly as they trundled their way past three or four tacklers at a time. UCC moved purposely towards the opposition line as Clare Rigney touched down with what was a typical forward try, as she took advantage of some poor tackling and stretched over the line. This was followed by a magnificent conversion by Knightly, 19-5.

From the kick-off, Aine MCkenna for UCC put in some tough tackles and this again lead to UCC’s forward momentum. Combined pressure by Clare Rigney and Lucy Barry kept college close to the try line. A lengthy kick chased by Aoife Deasy once again, was touched down for UCC and converted by Eimear Knightly which left the final score at 26-5. From there UCC closed the game out while all the time maintaining possession.

UCC and valued supporters enjoyed the celebrations at a job well done. This victory puts UCC at the top of the table heading into the Christmas break and the New Year.

Training Continues every Tuesday night at 7pm in UCC Farm. For more information of directions and times contact uccladiesrugby@hotmail.com or check out www.uccrugby.ie. Beginners Always Welcome!