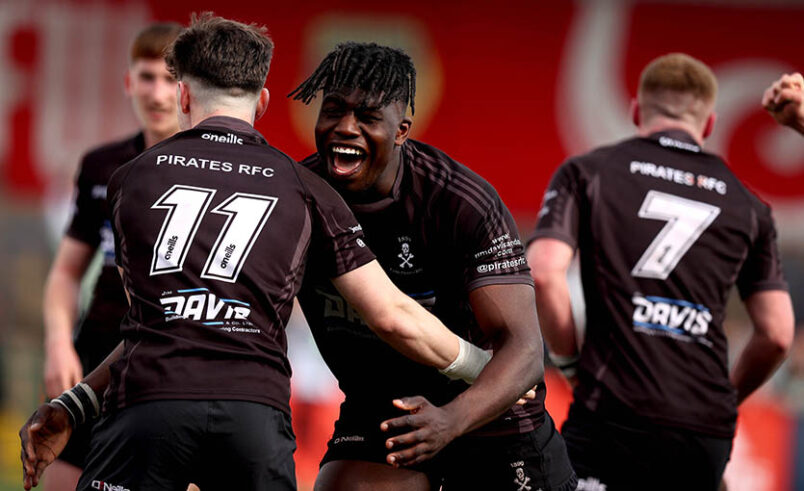 It was a hugely exciting day in Musgrave Park on Sunday afternoon as those in attendance witnessed some incredible rugby across three keenly contested Bank of Ireland Munster Age-Grade Club finals.

Killarney lifted the first silverware of the day when they proved too strong for a spirited Shannon side in the U16 Girls Cup final.

In the afternoon, Waterpark got the better of Ennis as they secured the U16 Boys Cup title while the U18 Boys Cup final was a truly thrilling affair as the Cobh edged out Waterpark 33-27 in what was a superb display of running rugby from both sides.

Killarney survived a late comeback from Shannon as the Kerry club were crowned U16 Girls Cup champions at Musgrave Park this afternoon.

Killarney got off to a great start with an early Fia Whelan try which she converted herself to put her side 7-0 in front. Shannon responded with strong carries from Jessica Ikeh and Mary Ohanya which gave them field position.

However, a grubber kick down field eventually saw a Shannon player impede a Killarney player from grounding the ball. As such, the referee awarded a penalty try which saw Killarney take a 14-0 lead. 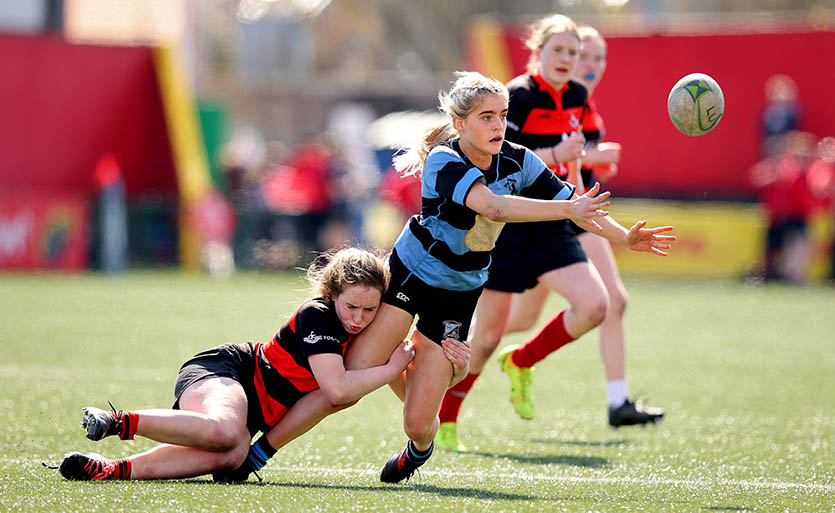 Shannon got a lifeline before the break when Ohanya crossed for her side’s opening try. Lucia Te Pou’s conversion was wide of the posts as Killarney’s lead was reduced to 14-5. However, Katie O’Donoghue scored a try for Killarney which was brilliantly converted by Whelan which gave the Kerry club a 21-5 lead at the break.

On the resumption of the second half, Shannon launched a commendable comeback as they hit back with two unconverted tries, scrum-half Grace Dillon crossing for the latter.

With Killarney’s lead now standing at just 21-15, the Kerry club upped the tempo once again as Ava O’Malley scored an excellent try just a few minutes before full-time.

The Kerry club made sure of the result when Holly O’Sullivan crossed for a try in the dying moments of the game to secure a 31-15 win for Killarney.

Waterpark were crowned the 2021/2022 U16 Boys Cup champions after they overcame a stern challenge from Ennis at Musgrave Park this afternoon.

Both sides were nip and tuck for the majority of the first half with little separating the sides. However, it was the Waterford side who opened the scoring when Shay Kennedy crossed in the corner just a few minutes before the break.

Ben Wallis knocked over the conversion to give his side a 7-0 lead.

Ennis responded straight away with a try from replacement prop Nicolis Roos. Roos initially got his team on the front foot with a powerful carry before he made himself available a few phases later to cross for a crucial try. Odhran Flynn’s conversion sailed between the posts as Ennis got themselves back into the game. 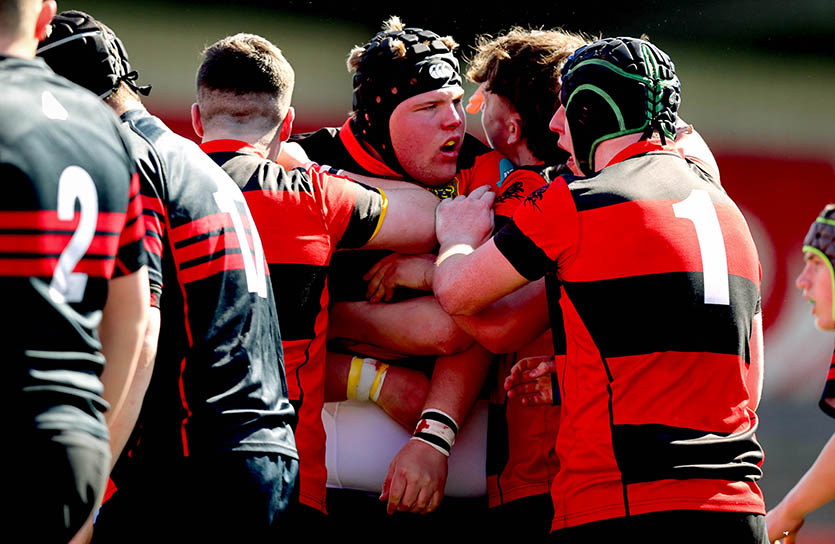 On the resumption of the second half, Waterpark took the lead again when Dylan Coady crossed in the corner which was converted again by Wallis.

At this stage the game began to break up and some nice offloading from Waterpark saw number eight Sam Jones cross for his side’s third try. Wallis’ conversion was wide as Waterpark took a 19-7 lead into the final 10 minutes of the game. 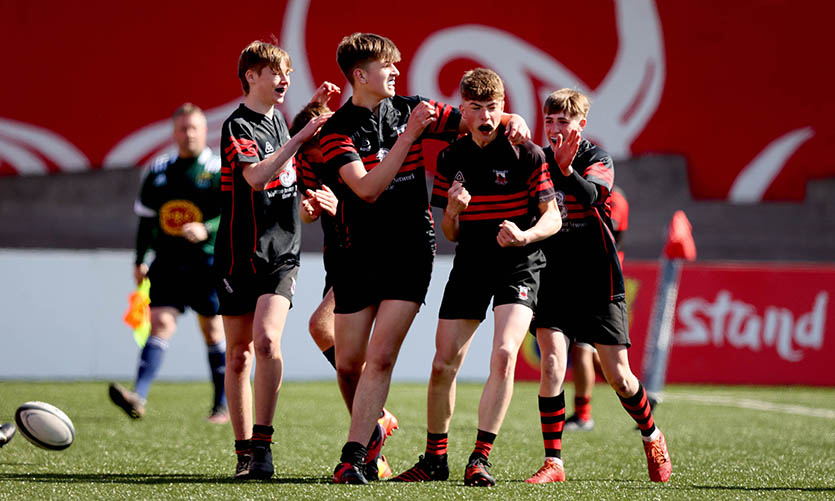 A penalty from Wallis ensured the lead stretched out to 22-7 and this is how it remained as Waterpark secured the U16 Cup title.

Cobh Pirates were crowned the 2021/2022 Bank of Ireland Munster U18 Club Cup champions after a scintillating display of rugby from both sides saw Cobh edge out Waterpark 33-27 at Musgrave Park.

Waterpark got off to a strong start when winger John Pearson dotted down in the corner after he collected a crossfield kick from out-half Jack Coady. Coady converted to give his side an early 7-0 lead.

Cobh hit back straight away when the busy Jack Worall ran a scything line to break through the Waterpark midfield to dot down. This try was converted by Adam Lynch as both sides began to warm to the occasion.

Cobh Pirates went in front soon after when a brilliant break by Aaron Quirke saw the out-half offload to Saul Kahn. The fullback made no mistake as he crossed for his side’s second try which as converted by Lynch. 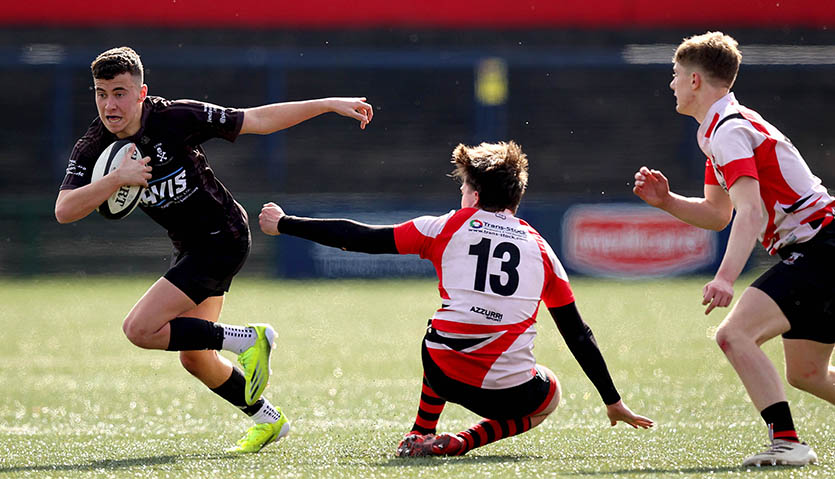 Sean Edogbo, younger brother of Greencore Munster Rugby Academy lock, Edwin, began to get on the ball more and a marauding run from the number eight brought play deep into the Waterpark 22. From there, the ball went through the hands where Kahn was on hand to score his second try. The conversion went wide of the posts as Cobh took a 19-7 lead.

However, Waterpark got back into the game almost immediately when Mark Wallis powered over the line from a quick-tap penalty after some good work initially from David Kelliher. Coady’s conversion ensured there were just five points between the sides at the break as Cobh’s lead was reduced to 19-14.

Waterpark continued where they left off at the end of the first half by dominating the opening 10 minutes of the second half. Indiscipline from Cobh saw Coady notch over another three points to reduce the deficit to just two points at 19-17.

Coady then had a chance to put his side into the lead but his penalty attempt drifted to the right and wide.

Waterpark continued to apply tremendous pressure on Cobh and their efforts were rewarded when powerful number eight Mark Wallis crossed in the corner to put his side in the lead. The conversion was unsuccessful as Waterpark took a 22-19 lead.

Cobh came roaring back, however, and Edogbo used his pace and power to cross for a try which was converted by Lynch. This put the Cork side back into the lead on a scoreline of 26-22. 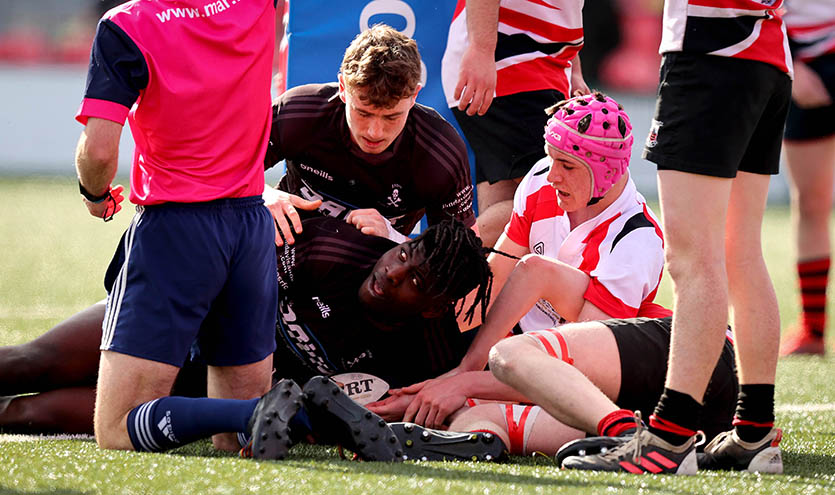 Waterpark never gave up. The Waterford side went back down the other end of the pitch and scored through the brilliant Wallis once again. The unsuccessful conversion meant Waterpark took a one point lead into the final minutes of the game.

With tensions and emotions incredibly high, Cobh managed to mount one final attack and it was that man Edogbo who powered through the Waterpark rearguard to cross for his second try.

Lynch’s conversion saw Cobh edge into a 33-27 lead and the Cork side managed to hold on for a memorable victory in what was an incredible game of rugby from both teams.