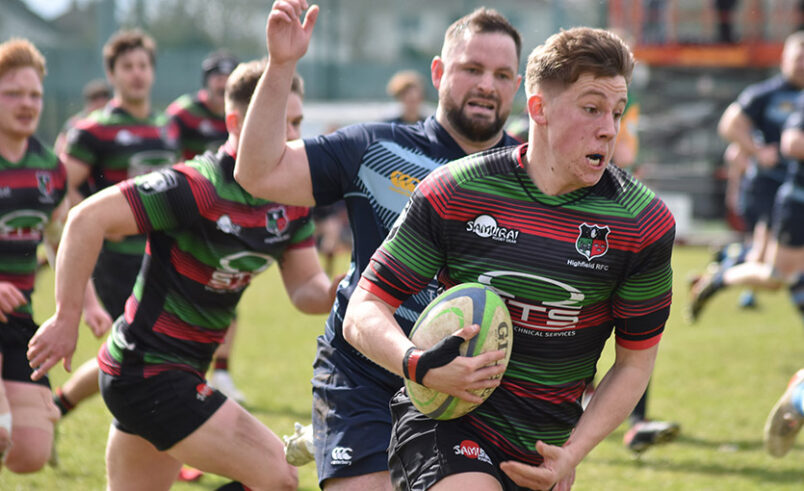 With just one round of games left in the All Ireland League, the battle hots up for home semi-final places, as well as avoiding the relegation play-offs.

Cork Constitution ended Young Munster’s hopes of a top four finish in Division 1A with a 27-19 victory at Tom Clifford Park.

Young Munster who trailed 13-7 at half time, took the lead with  tries from Conor Phillips and Shane Malone and an Evan Cusack conversion but the Temple Hill side hit back with tries from Niall Kenneally and Max Abbott both of which Aidan Moynihan converted. Eoin O’Connor scored Young Munster’s opening try, while Billy Crowley scored a try in the opening half for Con’ and Moynihan converted and also added two penalties.

A last minute penalty from Tony Butler earned Garryowen a 15-14 victory over UCC at the Mardyke. Tries by Dylan Murphy and Jack Delaney and a Butler conversion gave Garryowen a 12-0 interval lead. Tries from Matthew Bowen and Joe O’Leary both converted by Rob Hedderman put the students ahead until Butler’s late penalty decided it.

In Division 1B, second place Highfield and third placed Shannon recorded bonus point victories and with just a point between them, they are due to meet in the semi-final play-offs but who will have home advantage will not be known until after next week’s games.

Shannon were 31-6 away winners at Banbridge. Kelvin Browne scored two of Shannon’s tries – Jordan Prenderville and Alan Flannery got one each. Jake Flannery kicked three penalties and a conversion.

Cashel secured a home semi-final draw in Division 2A after their 20-10 away win at Nenagh Ormond. Johnny Blair and Diarmuid Gallagher scored tries for Cashel and Cian Mullane converted both and also added two penalties. James Finn and Peter O’Connor replied with tries for Nenagh.

Tries from Ryan Foley and Rob Reardon were not enough for Dolphin who lost 18-10 away to Rainey Old Boys.

In Division 2C late tries from Fabien Loughry and Cormac Kelliher earned Sunday’s Well a 27-15 home win over Midleton to move them out of the relegation zone. The ‘Well led 12-3 at the break with tries from Will Trevor and Adam Brown with Loughry kicking three conversions. Stuart Lee replied with two tries, a conversion and a penalty for Midleton.

Clonmel are routed to the foot of the table after their 24-8 away defeat by Bangor. JJ McIlwraith scored a try for Clonmel and Darren Cass added a penalty.