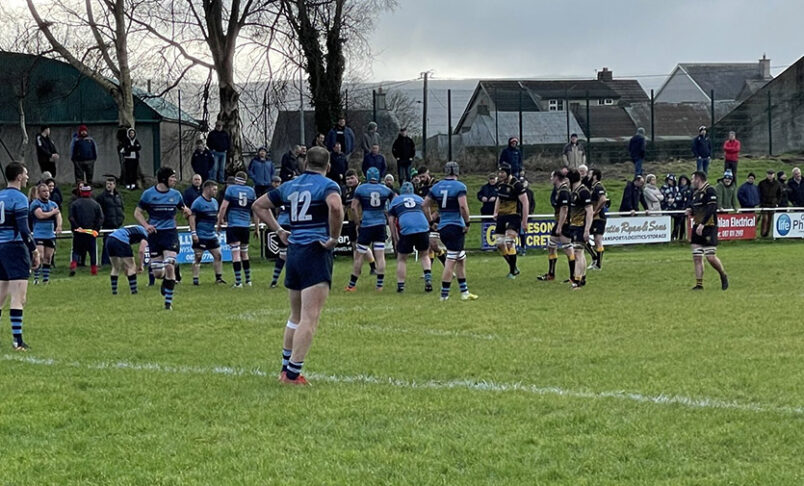 Clanwilliam edged out Kilfeacle 9-6 at the weekend

The line-up for the second phase of the Munster Junior League was completed this weekend, despite a few games outstanding that will be played over the Holiday period.

In Conference A Newcastle West finished top after their 16-10 home win over Richmond. Tadgh Bennet opened the scoring for Richmond with a penalty but a try from Mike Burke and a conversion and penalty by Charlie O’Doherty gave the home side a 13-3 half time lead. O’Doherty extended Newcastle West’s lead with his third penalty a but a try from Darragh Joyce converted by Bennett ensured a losing bonus point for Richmond.

Clanwilliam won the bragging rights in the big Tipperary derby with a last minute penalty from Niall Leahy deciding the outcome with a 9-6 victory, but Kilfeacle did have a penalty effort from the restart but that went wide. Leahy gave the home side a 3-0 half time lead and added two more in the second half. Gavin Heuston replied with two penalties for Kilfeacle. However, by fact of a losing bonus point it is Kilfeacle who qualify for Section A in phase 2 with Clanwilliam now playing in section B.

Thomond finished their campaign in second place with a hard earned 20-14 away win at Galbally with tries from Ger Finucane and Evan O’Connor that were both converted by Adam Guerin. Mark Mullery scored a try for Galbally and John Kerins converted and also added a penalty.

Abbeyfeale defeated St. Senan’s 22-17 and this result will also be carried forward into phase 2. Sean Kilbridge scored two tries, two conversions and a penalty for the winners. Colm O’Sullivan scored Abbeyfeale’s third try. Aidan McMahon and David Hanley replied with tries for Senan’s with Declan Rowe converting both and also adding a penalty.

Bandon finished unbeaten in Conference B after they defeated Skibbereen 22-8 in a west Cork derby. Ben Ridgeway, Tom Ferguson and Gearoid O’Leary scored tries for Bandon with Ridgeway kicking two conversions and a penalty. David Jennings replied with a try for the home side and Jack Driscoll kicked a penalty.

Crosshaven defeated Waterpark 19-8. An Adam O’Connor try converted by Kealan Daly had Crosshaven 7-3 ahead at half time. Willie Walsh kicked a penalty for the visitors. Tries by James Burke and Sean Scriven and a Daly conversion put the game beyond Waterpark, as the visitors only reply was a try by Paddy Kiersey.

Mallow won their first game of the campaign defeating Clonakilty 12-0. Dave Breen and Rowan Mills scored tries for the home side and Jimmy Glynn kicked a conversion.

In Conference C the game between leaders Thurles and bottom side Mitchelstown was called off because of Covid.

Fethard ensured they would finish in second place after their 49-5 home win over Waterford City. Jack Kealy scored three tries, Peter Wall two and Josef O’Connor and Darren Prout got one apiece. Wall and O’Connor converted all the tries between them.

St. Mary’s ensured their place in Section C with an 18-0 away win at Scariff. Rodney Gallagher, Tom Sudlow Poole and Gareth Moore scored tries for Saints and Paul Loughran kicked a penalty.

A try from Stephen Dolan earned Ennis a 5-0 away win at Dungarvan but it was not enough for the Clare side to qualify for Section C in phase 2 of the league.

Kanturk finished top of Conference D after their 29-0 away win at Kinsale, a result that sees Kinsale miss out on a top four finish. Brian O’Sullivan and Colin Walsh got two tries each and Ronan O’Brien scored one. Stephen McAuliffe kicked two conversions.

Charleville defeated Ballincollig 12-10 to finish second. Jess Smith kicked four penalties for the winners, while Shane Kavanagh replied with a try for Ballincollig and Shane Buckley converted and also added a penalty,

Ballincollig finished level on points with Kinsale but because they lost less games it is Ballincollig who finish in the top four.

Fermoy had a narrow 15-7 away win at Killorglin to book their place in the last four. Ben Twomey kicked five penalties for Fermoy and Killorglin replied with a try by Cian Foley which Luke O’Shea converted.

Castleisland moved back to the top of Conference E after their 15-5 away win at Youghal. Eric Sweeney and Sean Nolan scored tries for the visitors and Joe Sheedy kicked a conversion and a penalty. Scott O’Sullivan was Youghal’s try scorer.