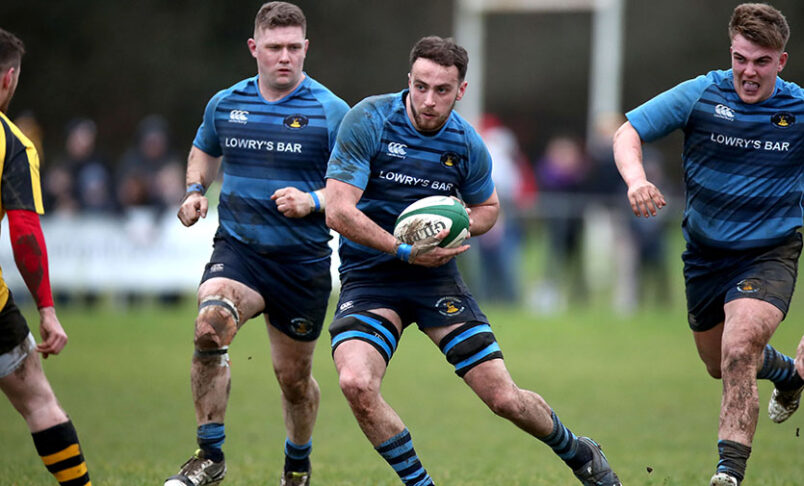 The Munster Junior League got underway this weekend in a new format that produced a few shock results as Thomond and Muskerry had surprising wins.

In Conference A, Thomond having lost twice to Newcastle West already this season, made amends with a convincing  29-10 win at Liam Fitzgerald Park. The home side were out of the blocks quickly when Cian Hinchy went in for a try under the posts and Adam Guerin converted.

Guerin added two penalties before Sean Herlihy  opened Newcastle West’s account with a penalty. A third Guerin penalty made it 16-3 in favour of Thomond at half time.

Guerin added another penalty before late tries from Eoghan Sherlock and Gary Bateman put the game beyond the visitors. Herlihy did score a late try for Newcastle West and Charlie O’Doherty converted.

Defending champions Kilfeacle had to pull out all the stops to see off the challenge of a gallant St. Senan’s side at Jim Slattery Park before emerging with the spoils on a 34-30 scoreline. Kevin Kinnane scored two tries for the Tipperary side and Kevin Ryan and John Burke got one each. Willie Staunton converted all four tries and added two penalties. Aidan McMahon replied with two tries for the home  side and Adam McEvoy also got a try. Declan Rowe kicked three conversions and three penalties.

Richmond were deserving 34-17 home winners over Clanwilliam. An early try from Jack O’Hanlon converted by Brian Mullins gave the home side an early break through, but they were rocked when tries by Darragh Burke and Jack Ryan edged Clanwilliam 10-7 ahead. A try by Pierce McCarthy put Richmond 12-10 ahead at half time. Tries from Brian Bennett, Keelan Stephenson and two from Shane Halpin, plus one conversion by Mullins secured the win for the home  side. Jack O’Dwyer scored a late try for Clanwilliam and Niall Leahy converted.

Abbeyfeale were convincing 31-3 home winners over an under strength Galbally side. Sean Kilbridge contributed two tries and three conversions to Abbeyfeale’s tally. Brian Collins, Dan Murphy and Rory O’Brien also scored tries for the west Limerick side. Graham Burke replied with a penalty for the visitors.

Muskerry caused a big upset in Conference B with a 25-18 home win over Mallow and proved that their recent County Cup final win over the same opposition was no fluke. Tries from Frankie Horgan, Lewis Grice and Mark Jones and a conversion and a penalty from Rob Cahill had Muskerry 20-8 ahead at the interval. Dave Walsh scored a try for Mallow and David O’Sullivan kicked a penalty. Mallow came more into the game in the second half  with a try from Jimmy Glynn which O’Sullivan converted and Dave Breen kicked a penalty also for the visitors. A try by Ciaran O’Connor ten minutes from time secured the bonus point win for the home side.

Bandon edged out Old Christians 23-22 in a thriller at Old Chapel. Ben Ridgeway and Tim Cummins scored tries for Bandon and Ridgeway converted both and added three penalties. Ryan Burke, Chris Hartnett and Sean Kelly replied with tries for the Rathcooney side and John Marnell added two conversions and a penalty.

Waterpark defeated Clonakilty 17-8 at Ballinakill with all their scores coming in the opening half as they led 17-3 at the break. Willie Walsh and Rory O’Dwyer scored tries for Waterpark and Walsh converted both and added a penalty. Mark Purcell replied with a try and a penalty for the visitors.

Crosshaven collected all five points in their opening encounter with a 31-16 home win against Skibbereen. Harry O’Connell and James Burke each scored two tries for the winners and Darcy Ryan got one. Ian Smith kicked three conversions. Kevin Coombes replied with a try for Skibbereen and Jack O’Driscoll added a conversion and three penalties.

In Conference C, Ennis and St. Mary’s played out a 23-23 draw at the Clare venue. Sean Hayes got all of Ennis’ scores with two tries, two conversions and three penalties. Keith McManus scored two tries for the Saints and Keith White got one. Alex Kiely added two penalties and a conversion.

Dungarvan defeated Fethard 29-7 with Dave Hickey scoring two tries for the winners and Martin Houlihan and Joey Doherty getting one each. Jack Jacob converted three of the tries and also added a penalty. Dale Murphy replied with a try for Fethard which Josef O’Connor converted.

Cobh Pirates got the better of Killorglin 14-10 in a tight game at the Paddocks. Ben Kennedy was Cobh’s try scorer and Adam Devlin kicked three penalties. Killorglin replied with a try from Kevin O’Sullivan and Darragh O’Shea kicked a conversion and a penalty.

Castleisland also made a winning start in west Cork with a 35-17 win in Dunmanway. Dean Cronin scored two tries for the winners and John Bell, Shane Brosnan and Donal Geaney also crossed the white wash. Joe Sheehy converted all five tries. Damian Healy and Eamonn Freeman replied with tries for Dunmanway and Podge burns converted both and also added a penalty.

In the Women’s Division 2 League, U.L. Bohemian travelled to Ballinakill and defeated Waterpark 31-22. Player of the match Shannon Dawson scored two tries for the winners as did Rebecca O’Shea. Leah Melling also scored a try and Lorraine O’Connor kicked three conversions. Waterpark replied with two tries from Alisha Flynn and one each by Jane Rochford and Erika Kiely. Chloe Beukes kicked one conversion.

Highfield made a winning start to their Junior 2 South League campaign with a 42-0 home win over Muskerry. Johnny Sheehan (2), James Sheehan, Michael Morris, Eoin Dorgan and Neal Griffin were the try scorers for Highfield. Dave Eustace converted all six tries.