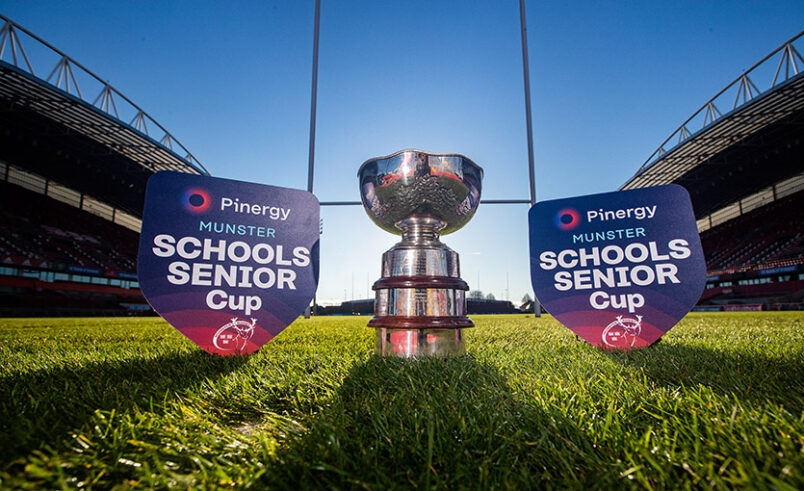 After a short hiatus, the Pinergy Munster Schools Senior Cup has come roaring back this season with an enthralling campaign.

There has been great commitment, determination and no lack of skill on show as several schools have battled it out but on Tuesday, it comes down to two sides in the battle for the coveted Garrett Fitzgerald Cup.

The finalists helped get the competition off to a great start with their semi-final qualifier match at Thomond Park back in January. Even with a backdoor available for the defeated team, neither side wanted to contemplate defeat.

The teams were level at 10 points apiece going in at half-time. Ben O’Connor for PBC and Oscar Davey of Crescent exchanged early penalties. It was PBC hooker Danny Sheehan who got the first try after a strong rolling maul from his teammates. Crescent’s hooker Mark Fitzgerald responded.

O’Connor struck early in a tight and nervy second half to nudge Pres back in front but at the end of the day it was Crescent who emerged victorious. Great pressure saw them force Pres’ into conceding a penalty try and the Limerick side showed great determination and heart to hold out for a 17-13 victory.

As a result of the defeat, the Mardyke school had to face St Munchin’s College in the quarter-final. Full-back O’Connor was in sublime form for the Cork side as they raced into a 21-0 lead at half-time. He scored the opener; helped create the other tries for the sprightly Sean Condon and kicked all three conversions. Munchin’s did make a fightback in the second-half with a pair of tries but Pres’ maintained their comfortable lead through well taken efforts from Adam Twomey and Fionn Rousell, who notched a try for the pack.

Come the semi-finals, it was the local Cork City derby that kicked things off in an enthralling encounter at Musgrave Park. The game was end-to-end, and the mercurial Rory O’Shaughnessy opened the scoring with a try that O’Connor’s trusty foot converted.

However, Pres soon looked to be in trouble as their Northside rivals dominated either side of half-time and built up a 19-7 lead.

Time also seemed to be against them as they still trailed by that score with 10 minutes left. The team pulled together. O’Connor was again a key instigator and a great wide pass saw Condon touch down before a Shaughnessy break helped set up O’Connor. The full-back converted both to nudge his side 21-19 in front and they held out for the last couple of minutes to reach Tuesday’s decider.

Crescent’s originally scheduled match with Bandon Grammar had to be postponed but it was every bit as nail-biting and thrilling as the other final four game despite the first-half being scoreless at Takumi Park. The Limerick side had the strong wind behind them in those opening thirty-five minutes and dominated territory but couldn’t break down the determined defence of the Bandon boys. Max Clein came closest but just ran out of space as he was tackled into touch.

The game opened up in the second-half and it was Ruadhan Quinn who would be the hero with the powerful number eight securing a hat-trick of tries to help his side to a narrow 17-15 victory. Quinn opened the scoring with a quick tap penalty close-in that Davey converted and powered again off the back of a scrum after a Bandon penalty.

The West Cork school responded to take a 15-12 lead with time-running out before Quinn sealed the game to the jubilation of the local Limerick support.

This year’s final should be another closely fought encounter and should make a fantastic end to what has been a great return of this prestigious competition.

We are encouraging the advance purchase of tickets here as tickets will need to be purchased from the ticket office on the East side of the stadium upon arrival prior to proceeding to the turnstiles. There will be no cash at the turnstiles so tickets must be purchased in advance.

As students from both schools will be in opposite stands within the stadium, we would encourage supporters to purchase tickets in their respective stands if they so wish. Crescent College Comprehensive will be in the East Stand with Presentation Brothers College in the West Stand.

There are designated locations for each school’s current pupils and there will be no access for anyone outside of those pupils to these areas. All terraces will be closed for this match.

Gates will open at 13:00 to facilitate access to the stadium.