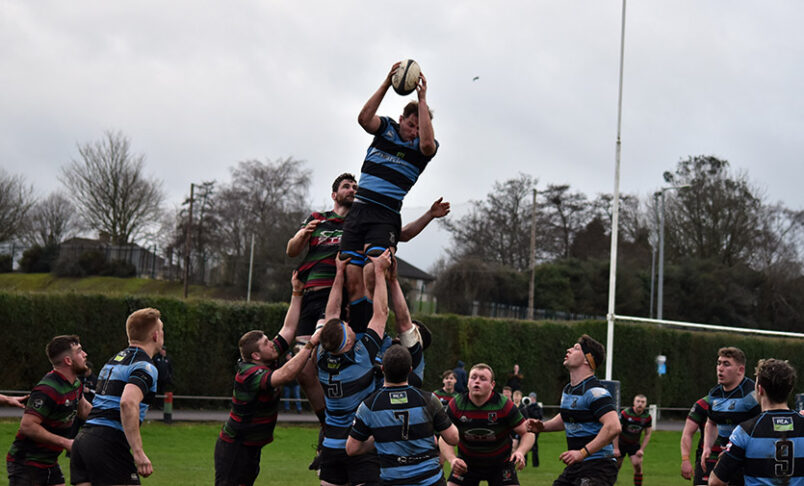 Shannon and Highfield are against Ulster opposition this weekend in Division 1B of the Men's All Ireland League after their 9-9 draw last week. Credit: Colbert O'Sullivan

The Men’s and Women’s All Ireland Leagues continue this weekend with full programmes of games while the U16 Girls Munster League final is down for decision.

See a full list of this weekend’s fixtures here.

In age-grade girls rugby, Killarney and Ennis meet in the U16 Munster League final at LIT on Saturday with a kick-off time of 1pm.

Killarney come into the final after beating Bruff 26-0 in the semi-final while in the other last-four tie, Ennis registered eight tries to defeat Ballincollig 48-0.

It is Derby Day in both Cork and Limerick in Division 1A of the Men’s All-Ireland League.

Cork Constitution, whose aspirations of a top-four finish were dealt a severe blow following successive defeats by Terenure College, from which they claimed losing bonus points, will be looking to make the most of home advantage count as they host UCC at Temple Hill.

This result has seen the Lilywhites slip to sixth place, while the Students are second from bottom. UCC go into the tie on the back of two heavy defeats by Dublin University, while the Temple Hill side put up 45 points without reply when these sides met at the Mardyke in early December.

Garryowen lock horns with Young Munster in a Limerick derby at Dooradoyle. The Sky Blues were defeated 36-7 by leaders Clontarf in Dublin last time out which was their sixth successive defeat and leaves them in seventh place. Young Munster are third following their 27-20 maximum point home win over UCD. Young Munster recorded a narrow 20-16 victory when these sides met at Tom Clifford Park, which resulted in a losing bonus point for Garryowen.

In the Top Four of the Women’s All Ireland League, UL Bohemian, who claimed a losing bonus point from their narrow 14-10 defeat by Railway Union, entertain Old Belvedere at the UL Arena. The Dublin side are seeking their first points as they were defeated 16-0 by Blackrock College in a Dublin derby.

Ballincollig, who ran out 17-15 away winners over Malone in their Conference opener are away to Wicklow, who are on zero points following their 36-3 home defeat by Galwegians.

Back to the men’s All-Ireland League, Highfield, who are now in second place in Division 1B following a 9-9 draw against Shannon at Woodleigh Park and a 6-0 defeat by the same opposition in Limerick before Christmas, are away to City of Armagh, who are sixth. Highfield’s last win was when they defeated the Ulster side 21-10 at Woodleigh Park. City of Armagh go into the tie on the back of a 26-8 defeat by new leaders Old Wesley in Dublin.

Fifth-placed Shannon, who halted Highfield’s juggernaut start to the campaign with a 6-0 win at Thomond Park and a 9-9 draw on Leeside in their last two games, welcome Malone, who are hovering above the drop zone in eighth place, to Thomond Park. Shannon ran out 15-12 winners when these sides met in Belfast and Malone go into this week’s tie on the back of successive draws against St Mary’s College.

There are two Munster derbies in Division 2A.

Fifth-placed Dolphin welcome third-placed Cashel to Musgrave Park, with the Leesiders going into the tie on the back of a heavy 51-14 defeat by Nenagh Ormond in North Tipperary. Cashel ran out 14-10 home winners over MU Barnhall last time out and they also won December’s corresponding meeting with Dolphin 24-7 at the Spafield.

Old Crescent, who are seventh, welcome bottom side Nenagh Ormond to Takumi Park. The Limerick side claimed all points on offer from their local derby against UL Bohemian, which they won on a 34-15 score line at the UL Arena. The North Tipperary side recorded a valuable 51-14 maximum point home win over Dolphin last time out. Old Crescent ran out 30-15 winners when these sides met at New Ormond Park, which was the second of their three bonus point victories.

UL Bohemian, who are hovering above the drop zone, travel to County Antrim to take on second-placed Ballymena at Eaton Park. The Limerick side were defeated 34-15 at the UL Arena by Old Crescent in their last game, while they ran out 29-26 home winners, when they met Ballymena in December and claimed maximum points. The County Antrim side returned home with a losing bonus point and they recorded a narrow 12-10 away win over Rainey Old Boys last time out.

Midleton, whose hopes of a top four finish in Division 2C were dashed, following their 18-10 defeat by Tullamore in County Offaly, face a tricky task as they entertain fifth-placed Omagh Academicals at Towns Park. The County Tyrone side recorded 24-8 home win over City of Derry in an Ulster derby and they defeated the East Cork side 18-8 when these sides met at the Thomas Mellon Playing Fields.

Seventh-placed Bruff face a tough assignment as they welcome leaders Enniscorthy to Kilballyowen Park. The County Limerick side were defeated 20-13 by Sunday’s Well at Musgrave Park and they returned home with a losing bonus point. The Model County side reclaimed pole position from their 27-11 home win over Clonmel and they recorded a maximum point 35-22 win when they met Bruff at Alcast Park.

Sunday’s Well, who recorded their first win of the campaign when they defeated Bruff 20-13 at Musgrave Park last time out, but are still rooted to the foot of the table, travel to County Down to take on third-placed Bangor. The County Down side were narrowly defeated 14-13 by Skerries last time out and they ran out 16-14 winners in December’s corresponding fixture at Musgrave Park, from which the Leesiders claimed a losing bonus point.

Clonmel, who are second from bottom and still without a win, face a tough assignment as they welcome fourth-placed Tullamore to South Tipperary. The Faithful County side go into the tie on the back of an 18-10 home win over Midleton, while Clonmel were defeated 27-11 by Enniscorthy in County Wexford last time out.

There are also two games down for decision in Phase 2 of the Munster Junior League.