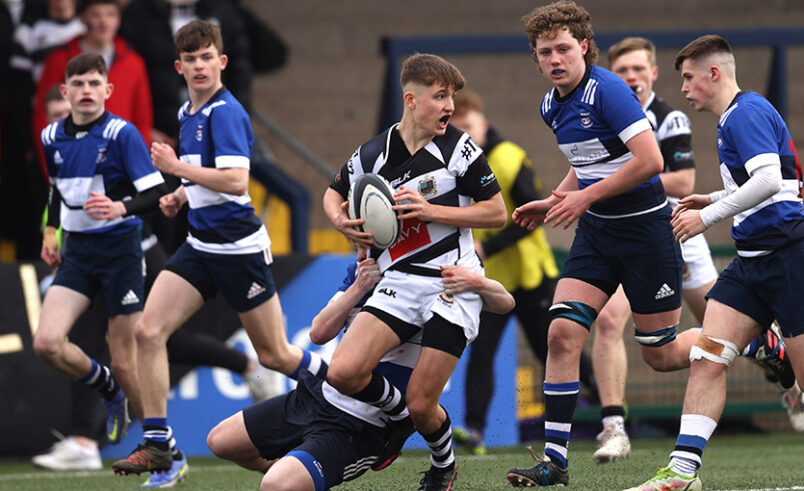 Presentation Brothers College are through to the final of this year’s Munster Schools Junior Cup after the Cork school recorded a 20-5 win over Crescent College Comprehensive on Thursday afternoon at Musgrave Park.

PBC will now meet their rivals CBC in the showpiece event the week after next.

PBC got off to a strong start when John Paul Curtin scored the game’s opening try after a lot of early pressure eventually proved too much for Crescent.

The full-back was able to glide through a gap in the Limerick school’s defence after some strong carrying from the PBC pack. With a strong wind blowing from the Sunday’s Well end, Harry Murphy was unsuccessful with his conversion.

Crescent had an opportunity to cut the deficit to two points but Fionn Rowsome’s penalty attempt at the posts was unsuccessful.

That disappointment didn’t last too long as some quick thinking from Crescent scrum-half Jake Moloney put his side on the front foot after a clever pick-and-go close to a ruck. Crescent openside Dan Le Gear was then on hand to cross for a crucial try which levelled the game. Rowsome couldn’t add the extras so the sides were level entering the second quarter.

Some good breakdown work at the start of the second half thwarted two dangerous PBC attacks. With momentum firmly with the Cork school, the game nearly turned on its head when Crescent raced clear after picking off a PBC pass. Unfortunately for Crescent, Alastair Dunne was on hand to put in a crucial tackle to stop Crescent just short of the line. A few phases later, PBC won a turnover at the breakdown to alleviate the pressure in what was a huge opportunity missed for the Limerick school.

Pres pushed on from this point as Murphy added a penalty to extend PBC’s lead to 13-5 and not long after, centre James O’Leary took the ball on at pace to cross close to the Crescent posts.

Murphy’s conversion was successful as the Cork school saw out the game and can now look forward to a final meeting with their rivals CBC in two weeks’ time.