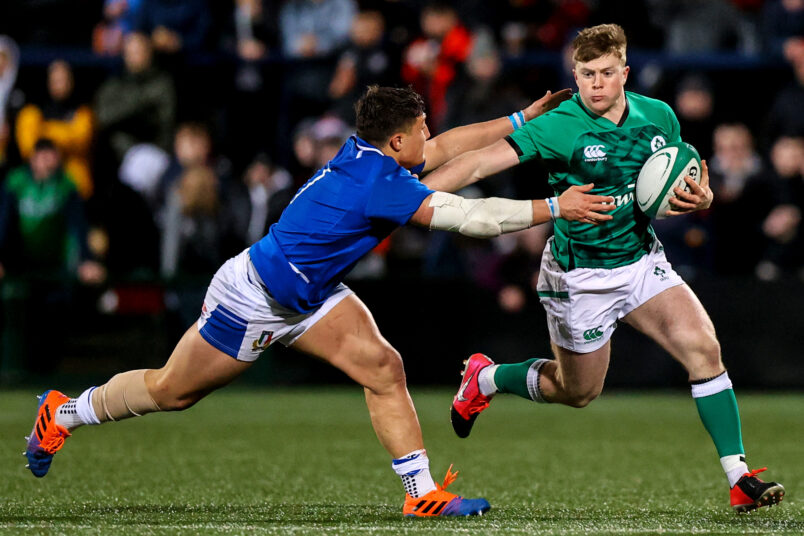 Patrick Campbell in action against Italy at Musgrave Park. Inpho

The game is Ireland’s penultimate game of the tournament, they face Scotland at Musgrave Park on Sunday week at 5pm. Buy tickets here.

Murphy has made two personnel changes to the side that beat Italy in Round 3 at Musgrave Park, with Ben Carson coming into the Ireland backline and Lorcan McLoughlin promoted to a starting position in the back row.

Carson featured for Ireland U20s during last year’s Six Nations in Cardiff and joins Jude Postlethwaite in midfield for the showdown against England in Barnet, after Ben Brownlee was ruled out through injury.

Murphy has selected an unchanged back three with Patrick Campbell, Chay Mullins and Fionn Gibbons retained, while Charlie Tector and Matthew Devine continue their half-back partnership.

Ulster’s Reuben Crothers once again captains Murphy’s youngsters from the back row, where McLoughlin comes in at blindside and James Culhane continues at number eight.

Commenting ahead of the game, Murphy said: “We’ve had another good window of preparation for this game, including last week’s session against the Senior Team at Aviva Stadium. We identified areas where we needed to improve on from Italy and recognise the requirement to hit another level of performance on Saturday night.”

Saturday’s game is live on the RTÉ News Now channel and on the BBC iPlayer.