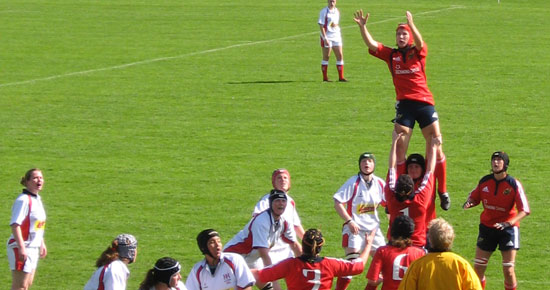 The Munster Women opened their defence of the Interprovincial Championship with a 21-17 win away to Ulster at Ravenhill on Saturday last.

The match kicked off in warm, sunny conditions with the opening exchanges going Munster’s way, as the Ulster team struggled to gain any meaningful possession during the first 15 minutes of the match. The opening two scores of the game went to Munster following Niamh Briggs’ precise kicking of two penalties.

Munster’s excellent lineout gave Ulster problems throughout the game with and clean possession from this facet of play led to a well- worked back move, resulting in the first try of the match, scored by Munster right winger, Sandra Williams. The try was converted by the Munster fullback Briggs who kicked well all day. Some great Munster forward play saw them encamped on Ulster’s line, however Ulster’s solid defence managed to hold out to prevent Munster increasing the lead. Ulster’s opening score came from a penalty kicked by Jo O’ Sullivan. Five minutes before the halftime break Ulster were reduced to 14 when Cathy Craig was sin binned. Munster took full advantage of this with another well- worked lineout move that resulted in a try for their flanker Kate O’Loughlin. The try was again converted by Briggs.

The second half kicked off with Ulster having the sun and wind on their backs. Ulster’s solitary lineout win of the half resulted in a try for Clodagh McCool and conversion from Jo O’Sullivan. From the restart, Ulster continued to press but was met by a strong Munster defence. The continued dominance of the Munster lineout was proving to be Ulster Achilles Heel. However this time it was Munster’s turn to be reduced to 14 when Niamh Briggs was sent to the bin. Ulster managed to press home their numerical advantage and another good period of continuity saw Eliza Downy race under the posts for a converted try, leaving Ulster trailing by a solitary point. However, to Munster’s credit, from the ensuing kick off, they applied a lot of good pressure and were awarded with a penalty which Niamh Briggs, converted to end the match.