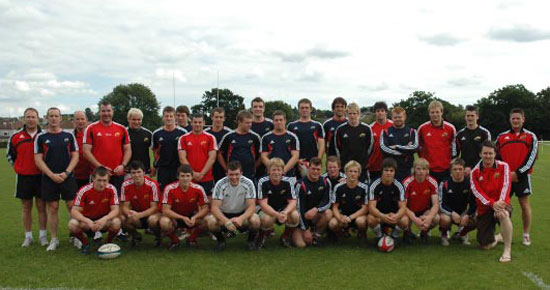 The Munster U20 side travelled to Wales recently where they played the Cardiff Blues Academy in Beddau RFC, as they continue in their preparations for the upcoming Interprovincial series.

Cardiff Blues showed their intention from the offset scoring a converted try 5 minutes into the game.

However, Munster fought back and responded with a well worked try taken by Captain, Peter O’Mahony. A missed conversion and a susbsequent successful Cardiff penalty left the score 10-5 at half-time.

Cardiff returned after the break with an early try, bringing the score to 15-5. Once again Munster showed great resilience with winger Ronan O’Mahony scoring a try in the last fifteen minutes.

Munster were camped on the Cardiff line for the closing seven minutes but the Cardiff defence proved too strong as they held out for a 15-10 victory.

On Saturday the Munster U20’s played UL Bohemians in a challenge match at Annacotty in Limerick, where they secured a win with a 29-15 scoreline.

The next challenge game sees the Munster U20 side take on UCC in the Mardyke on Wednesday, September 3rd, ko 7.30pm.