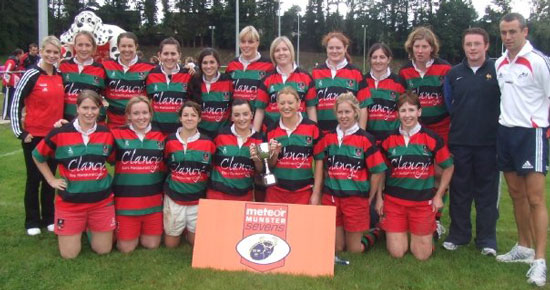 Garryowen were named the proud winners of the Meteor Munster 7’s Senior Club Competition on Saturday the 30th of August, while Cashel brought the Junior Cup to Tipperary, and not to be outdone by the men, Highfield took the inaugural Women’s Cup home to Cork!

In the Senior Draw, Garryowen battled it out with UCC in the Grand Final, finally beating UCC 35 to 15 in what was a highly-charged and competitive on-field clash between the two Munster sides.

The crowd was treated to over sixty thrilling games throughout the day as sixteen of the top senior club teams, including UL Bohemians, Shannon and the hosts, Garryowen once again took part in the event. This year, for the first time, eight junior squads and six ladies club teams also took to the pitch to compete for the Meteor Munster 7’s title.

Commenting on the results of the day, John Lacey, Meteor Munster Sevens event co-ordinator said, "The Meteor Munster Sevens Tournament has been a huge success and we are delighted with such a fantastic turnout today. There has been great interest from all the clubs, and club coaches in particular, who are using the event to kick off the season".

Meteor’s Head of Communications, Amanda Carroll today said, "Congratulations to the winners, and in fact all teams both men and women who participated in the Meteor Munster 7’s tournament".

"We are delighted to have teamed up with Munster Rugby in a tournament that involves so many talented players and teams in the province", she added.

The event also supported the ‘Headsup’ text referral service from Rehab Care, which aims to help young adults in difficulty by offering support group information for a range of issues via text on 50424.

The Heineken Cup was also on display on the day giving fans an exclusive opportunity to get a free personal photograph with the legendary trophy. Entertainment was provided both on and off the pitch with younger supporters enjoying fun activity including two giant bouncy castles, a DJ, face-painters, candy-floss, ice-cream, a delicious Barbecue and more!