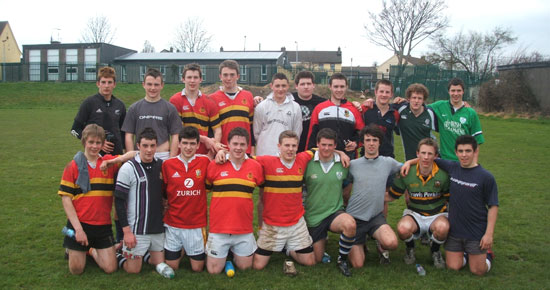 Following the success of the U15 and U16 Development squads that have been in operation for 18 months now and a recent U16 tour to South West England, Munster Rugby decided to build on this and organised a Transition Year Training week which took place in the University of Limerick on March 12th to 16th and in the Colaiste Stiofain Naofa, Cork from March 20th to 24th.

Forty five players were included between both camps and all Munster Schools were extremely supportive of the initiative, releasing all players from school for the week.

Throughout the week players completed skills, weights and speed sessions and completed modules in Sports Psychology, Nutrition, Weight Lifting Analysis, Core & Flexibility and Game appreciation. The Munster squad professional Senior Fitness advisors in both Cork and Limerick gave up their valuable time to take sessions during the week exposing the players to all their experience and expert advice.

The students were also fortunate to observe Munster and Irish Internationals training and also had a question and answer session with Denis Leamy and Donncha O’Callaghan in Cork.

The Transition year training week will become an annual initiative and in conjunction with ongoing work at U15 and U16 level will be a significant help in developing our younger players. By reducing the age at which we work with young players we can expect to see a stronger, faster, more powerful and more skillful player wearing the red jersey in the future.