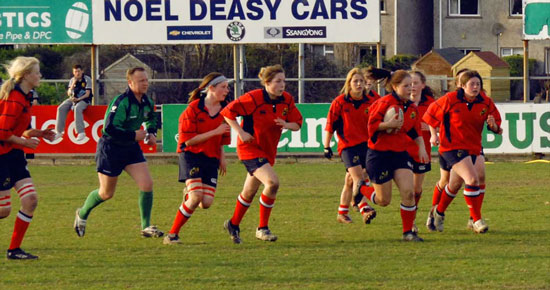 Top English side Worcester showed greater experience in defeating Munster on a scoreline of 22-5. However, after only five training sessions together, Munster played exceptionally well and only two late English tries made the scoreline flatter the visitors somewhat. Played in brilliant sunshine in Cork Constitution FC, the game was locked with only one score between the sides for most of the seventy minutes.

Worcester were first to score with a fine try under the Munster posts, which was duly converted. Munster went about their attacks with renewed vigour and this resulted in Ashling Hutchings using her searing pace to round the Worcester defence and score about twenty metres to the right of the posts. Sarah Keane struck the conversion kick well, only to have the ball deflect out off the upright. The margin between the sides remained at two points for a very tense and exciting period of fifteen minutes, when Worcester again crossed for an unconverted try. The score remained at 12-5 for most of the remainder of the game.

With only minutes to go Munster began to throw everything at the game in an attempt to score a try and level the sides. As usually happens when caution is thrown to the wind, errors are made and highly experienced Worcester pounced on these to score two late easy tries. Risks had to be taken and unfortunately, they didn’t pay of this time.

The Munster squad can be very proud of a performance that was rated by one of the best sides in England as the toughest they could remember. This performance came from a team that was assembled only a matter of weeks before the game. Players were still getting to know each other in the lead-up to the game and, on the field of play, had to learn what their team mates were capable of. The large and vocal crowd in attendance saw a team form before their eyes as the team began to gel and leaders emerged. In the forwards Kristina Kenneally of Thurles and Shannon’s Tracy Lawlor stood out, especially in their attacks on the Worcester defences. In the backline, inspirational leadership was shown by Captain Louise Egan of Clanwilliam in the out-half position, with young Fermoy star Ashling Hutchings showing tremendous attacking ability, as well as saving a number of tries with excellent tackling.

As a new team was born one might wonder if it would stray in any way from the tradition of Munster rugby teams, in terms of passion and true grit. That question was answered by these young girls in emphatic style. This new sister in the Munster rugby family showed all of the hallmarks of that undefinable Munster quality that is only there when you truly feel that you are "Irish by birth and Munster by the grace of God".

Louise Egan capped her excellent leadership all day with a speech at the after-match meal that not only stole the show but left many listeners struggling for composure as she described the feelings of pride that go with pulling on a Munster Captain’s jersey.
Thanks to Worcester for an excellent game and for giving us an occasion on which a new Munster team exploded onto the scene.

Well done Munster and, back on the training fields around the province we will work even harder.

The Munster squad was: