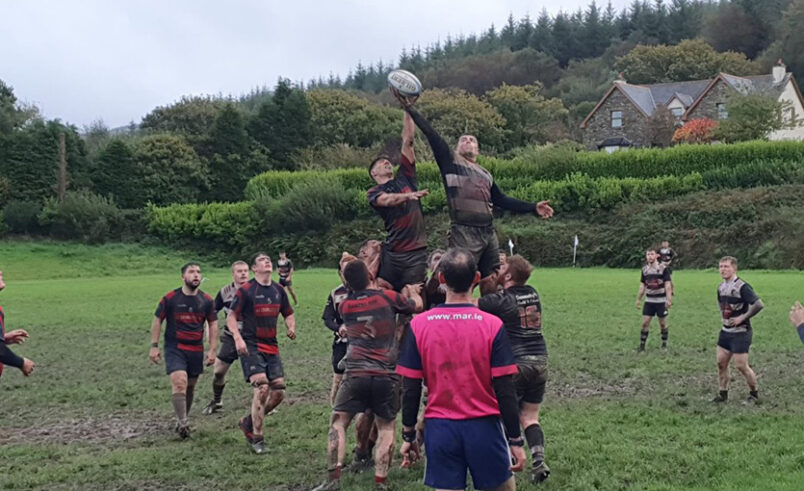 A view of the Munster Junior League clash between Bantry Bay and Ballincollig at the weekend. Photo Credit: Ballincollig RFC

After three series of games in the Munster Junior League, gaps are beginning to emerge at the top and bottom of all three sections.

In Section A; Newcastle West and Skibbereen lead the way with Richmond just a point behind, with Crosshaven next four points behind.

Skibbereen continued their good start to the campaign with a 16-6 home win against Clanwilliam. David Jennings scored the game’s only try and David Shannon added a conversion and three penalties. Clanwilliam replied with two pen penalties from Niall Leahy.

Tries from Jack O’Hanlon and Tadhg Bennett, along with a Bennett conversion saw Richmond come from 14-3 down at halftime, to defeat Thurles 15-14. Tries from Luke Kelly and Sam Quinlan, both converted by Paddy McGrath gave the home side the advantage in the opening half. Brian Mullins kicked a penalty for the Limerick side.

Crosshaven moved up to fourth place with a 29-3 bonus point win at home to Clonakilty. Eoin Downey kicked a penalty for Clonakilty.

Bandon got back to winning ways with a 25-17 away win at Muskerry. Jerry Crowley scored Bandon’s try and Ben Ridgeway kicked a conversion and six penalties. Muskerry replied with tries from Dave Kelly and Lewis Grice with Rob Cahill converting both and also adding a penalty.

Thomond lost for the second week in a row, losing 26-5 at home to Thomond. Yasushi Katsuta, Stephen Hayes, and Steven Finn scored tries for Mallow. Dave Cogan added a conversion and three penalties. Ryain Ahern replied with a try for Thomond.

A Keith McManus try, and two Penalties from Jazz Pendejito earned St. Mary’s an 11-0 away win at Abbeyfeale.

In Section B; the meeting of the top two sides  saw Fethard defeat St. Senan’s 27-3, with tries from Robert Wall, David Morgan, and Conor Kavanagh. Josef O’Connor converted all three tries and added two penalties. Craig Riordan kicked a penalty for the visitors.

Conal Doyle was Youghal’s hero as he scored a try, conversion and two penalties in his side’s 18-15 home win against Ennis. The Clare side replied with tries from Dylan Kenny and Cormac Browne, with Kenny adding a conversion and a penalty.

Charleville, Kinsale, and Tralee are the only sides in Section C, with maximum points.

A first-half try by Brian O’Sullivan converted by Stephen McAuliffe earned Kanturk a 7-3 away win at Castleisland. Joe Sheehy kicked a penalty for the home side.