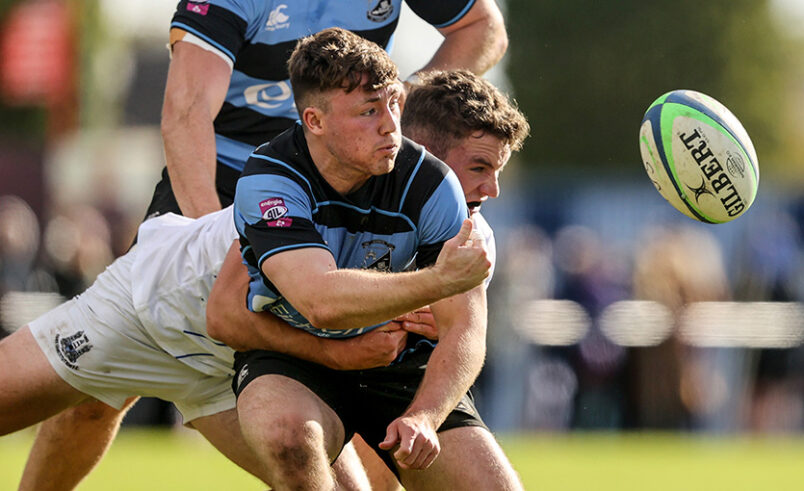 Second half come backs earned victories for Cork Constitution and Young Munster, as Garryowen and Shannon occupy the bottom two places in Division 1A of the Men’s All Ireland League after the third round of games.

On the back pitch in Thomond Park, Cork Constitution defeated Shannon 36-21, having trailed 21-12 at half time. Sean Duffy, Alessandro Heaney, Greg Higgins, Ian Leonard and Louis Kahn scored tries for Con’ and Aidan Moynihan kicked four conversions and a penalty. Shannon replied with two tries from Ethan Coughlan and one from Eoin McCormack. Mike Cooke converted all three tries.

Young Munster trailed UCD 10-3 at half-time at Belfield, but tries by Chris Moore and Alan Kennedy, along with two conversions and three penalties by Conor Hayes earned the Limerick side the spoils.

Division 1B leaders UCC had to come from behind to defeat St. Mary’s College 25-20 at the Mardyke. Louis Bruce, Sean Condon, and Killian Coghlan scored tries for the students. Daniel Squires added two conversions and two penalties.

Highfield lost their unbeaten record when Buccaneers defeated them 17-14 at Woodleigh Park. James French scored a try for the home side and James Taylor converted and they were also awarded a penalty try.

Cashel ended Nenagh Ormond’s great start to the season with an excellent second-half display that earned them a 36-20 away win. Brendan Ryan scored two tries for Cashel, and Richard Moran, James Ryan, and Cormac O’Donnell were their other try scorers. Ryan O’Sullivan kicked four conversions and a penalty. Nenagh replied with two tries from Willie Coffey and Conor McMahon converted both and also added two penalties.

Dolphin lost 29-12 away to Navan, with tries from Ryan Foley and Luke Moloney and a conversion from Tomas Quinlan.

Old Crescent lost away to Blackrock College 31-19. The Rosbrien side trailed 31-0 at halftime but 2 tries from Joe Rickard and one by Tavita were not enough to get anything from this tie. Ronan McKenna added two conversions.

UL Bohemian picked up their first point of the season, despite losing 24-20 at home to Ballymena. Darragh O’Gorman and Ihechi Oji scored tries for UL Bohs.

Despite leading 13-0 at half time with a try from Luke Hogan and a conversion, and two penalties by Dylan Cadogan, Tullamore fought back for a 21-18 victory. Dean Slattery scored a second half try for the Tipperary side.

A try by Eamonn Costelloe and a conversion by Paul Collins was not enough for Bruff who lost 15-7 at home to Skerries.

Bottom side Sunday’s Well moved out of the relegation zone with a 27-9 home win over Ballina. Fabien Loughery contributed a try two conversions and a penalty to his side’s tally. Maurice Daly, Evan O’Connell and Ryan O’Donoghue-Kelleher were their other try scorers.

In the Women’s All Ireland League UL Bohemian were no match for Blackrock College who ran out 63-7 winners. Chloe Pearse scored a try the home side and Kate Flannery converted.

Munster In The Community | Blitzes And Player Visits Roundup