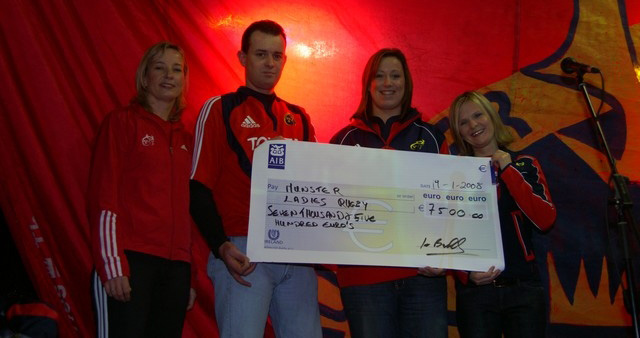 At their Charity Pre-Match Lunch prior to the London Wasps game, the Munster Rugby Supporters Club were proud to present TWO cheques to TWO deserving causes.

In the weeks prior to the London Wasps game, Jury’s Inn Limerick presented Two tickets for the game and a nights stay for two, at the hotel.

The MRSC held a raffle for this prize, raising €;5500. Further to this the Munster Rugby Supporters Club added €;2000, to make a total of €;7500, which was presented to the Munster Women’s Rugby team, to help fund them through the season.

As designated Charity for the lunch, the MRSC presented a cheque of €;1000 to The Cope Foundation. The Cope Foundation is a Cork based charity, who assist over 1700 adults and children with special needs throughout the City and County of Cork.

Pictured is Elaine Blackshields (MRSC Committee) presenting John Clifford of the Cope Foundation with the cheque.