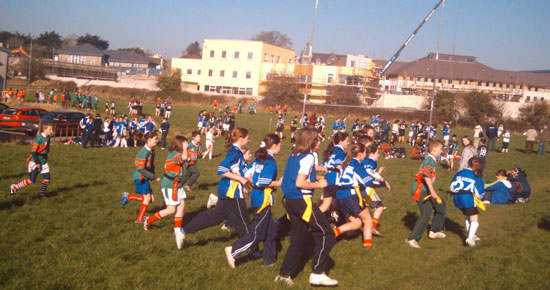 The biggest tag rugby blitz in many years was played in brilliant sunshine in Mallow last Wednesday.

The blitz organised by Mervyn Shorten, youth development officer for the Munster Branch, invited all the sixth class national school students to attend.

This resulted in playing twenty five matches just for fun, there were no winners and no losers, just young players, both boys and girls expressing themselves on the field. Of course, there was a little bit of rivalry between teams to hold the bragging rights for the year. However this aspect was not allowed to get out of hand as the teams were marked for sportsmanship, good behaviour on the field and skills.

The games were played at the sports ground beside St Patrick’s Boys National School and we thank them for there assistance. We also thank the referees who were on there mid term break during the week and who gave there time to be involved. Thanks go to Bill Myers, Ronan McCarthy, Chris O Regan, Michael Mc Sweeney and Aaron O’ Brien for all there help on the day, everything went smoothly.

In some cases over forty students per school were present, resulting in a number of teams from that school being represented in different sections. In all, over 200 children were active in a two and half hour period. Thanks to all teachers and Principals for there co operation on the day.