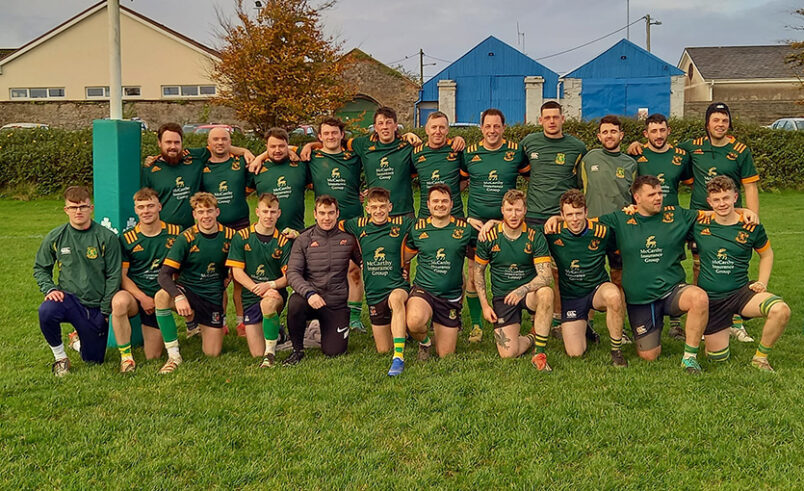 Fermoy recorded a 25-13 win over Scariff in Section B of the Munster Junior League at the weekend. Photo Credit: Fermoy RFC

Richmond won the top-of-the-table clash in Section A of the Munster Junior League to open up a six-point lead at the top of table.

Defending league champions Newcastle West lost their unbeaten record when they went down to Richmond 16-13 in a thrilling encounter at the Canal Bank. Once Newcastle West took the lead in the 12th minute with a try from Sean Neville, which Shane Airey converted, they always looked in control, until Keith McCarthy snatched victory for the home side with a try in the final minutes.

Airey did have a chance to level with a last-minute penalty, but his effort was off target. Airey kicked two first-half penalties to give the visitors a 13-8 halftime lead. Evan O’Halloran scored a try for Richmond and Tadhg Bennett kicked a penalty. Bennett added a second penalty after the break and then saw another effort hit the post before McCarthy’s try preserved Richmond’s unbeaten start to the campaign.

Skibbereen lost their unbeaten record losing 18-7 away to St. Mary’s. Jazz Pendejito kicked six penalties for the Saints, and David Jennings replied with a try for Skibbereen which Rory Byrne converted.

Kilfeacle moved into fourth place with a 25-7 home win over Abbeyfeale. Cormac Ryan scored two tries for the winners and Cillian Noonan and Kevin Doyle got one each. Luke Heuston kicked a conversion and a penalty. Abbeyfeale replied with a penalty try.

A great opening half hour by Bandon that saw them race into a 24-7 lead, earned them the points with a 24-17 victory at home to Waterpark. Willie Walsh opened the scoring with a try and conversion for the visitors, but Bandon hit back with two tries from Ben Ridgeway and one by Tom Ferguson.

Ridgeway converted all three tries and also added a penalty. Waterpark hit back to earn their fourth losing bonus point with a try from Patrick Kiersey and a conversion and penalty by Walsh.

Mallow moved level with Bandon with a  26-10 home win over Crosshaven. Steve Finn scored a try for Mallow which Dave Cogan converted and they were also awarded a penalty try. Cogan kicked four penalties and Jack O’Connell replied for Crosshaven with a try conversion and a penalty.

Clanwilliam edged out Thomond in a thriller at Clanwilliam Park 28-27. Ben Downey and Edward Nolan were try scorers for Clanwilliam and they were also awarded a penalty try. Niall Leahy kicked two penalties and a conversion. Dave O’Brien and Luke Costello were among the Thomond try scorers, and Eoghan Sherlock kicked three conversions and two penalties.

Old Christians defeated Muskerry 14-6 and also qualified for the semi-finals of the Junior Clubs Challenge Cup. Two penalties from Rob Cahill to one by Conor Dolan had Muskerry leading 6-3 at halftime. Tadgh O’Brien added a try for Old Christians in the second half and Dolan kicked two further penalties.

Clonakilty moved off the foot of the table with a 21-7 home win over Thurles. Rory Fletcher and Johnny Hill scored tries for Clon’ and Eoin Downey kicked a conversion and three penalties. Matthew Kelly replied with a try for Thurles which  Paddy McCormack converted.

Waterford City kept their promotion hopes alive with a 19-3 away win at Dungarvan. Haydon Casey scored two tries and two conversions for Waterford and Andrew Condron also added a try. Joey Doherty replied with a penalty for the home side.

Charleville and Kinsale made it three maximum point wins in Section C.