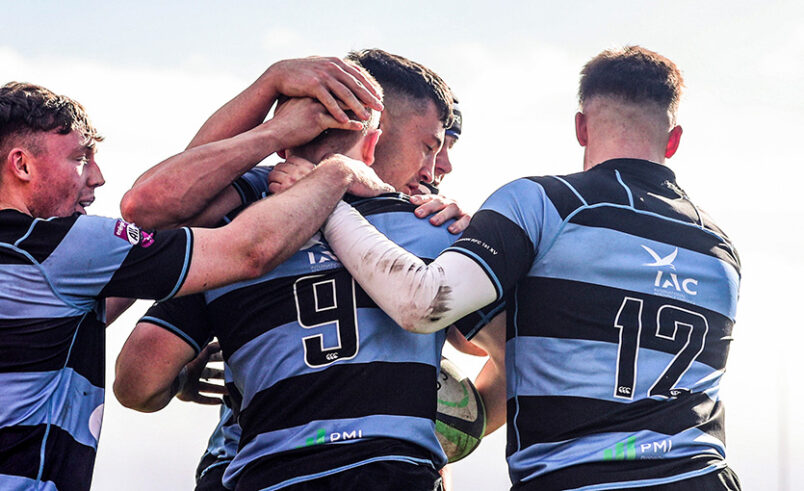 Shannon and Old Crescent recorded their first wins in local derbies to move off the foot of the table in their respective Divisions in the All Ireland League.

Shannon moved out of the relegation zone in Division 1A with a convincing 30-19 win over neighbours Garryowen at Thomond Park. The home side led 25-5 at the interval and had two tries from Jordan Prenderville and one by Luke Rigney. Mike Cooke kicked two penalties and a conversion. Shannon were also awarded a penalty try. Garryowen replied with tries from Darren Ryan, Jack Delaney, and Colm Quilligan, with Quilligan kicking two conversions.

Cork Constitution maintained their challenge for a top-four finish, with a hard-earned 36-31 away win at UCD. Daniel Hurley, Billy Crowley, Niall Kenneally, Billy Scannell, and Lamarque d’Arrouzat scored tries for Con’ and Aidan Moynihan kicked four conversions and a penalty.

Young Munster lost ground on a top-four finish when they suffered a 25-20 defeat away to Ballynahinch. The Cookies led 12-3 at the break. Paulo Leleispuao scored two tries for the Limerick side and Conor Philips got one. Evan Cusack kicked a conversion and a penalty.

In Division 1B, unbeaten leaders UCC came unstuck at the Mardyke when they lost 26-21 to Naas. The visitors led 19-7 at halftime and had to withstand a strong challenge from the students after the break. Sean Condon, Scott Buckley, and Mike Cogan scored tries for College with all three being converted by Daniel Squires.

Highfield suffered another defeat losing away to City of Armagh 31-19. John O’Callaghan and Robert Murphy scored tries for Highfield, who were also awarded a penalty try. James Taylor converted one of the tries.

Cashel moved up to third place in Division 2A with an impressive 27-0 win at home to Ballymena. Josh Pickering, Cormac O’Donnell, and Richard Kingston scored tries for Cashel, who were also awarded a penalty try. Josh O’Dwyer kicked a penalty and a conversion for the Tipperary side.

Nenagh Ormond got back to winning ways with a 27-15 home win over Dolphin. Josh Rowland scored two tries for the winners and  Willie Coffey and David Gleeson got one each. Conor McMahon added two conversions and a penalty.

Division 2C leaders Instonians maintained their great start to the campaign with a 50-5 away win at Sunday’s Well. Four of their tries coming in the final ten minutes when their superior fitness proved crucial. Alex Lane scored the ‘Well’s try.

Midleton lost 24-14 at home to Skerries. Trailing 24-0 early in the second half, a late revival was not enough to secure anything from this game.  Fionn O’Connell and Stuart Lee scored tries for Midleton and both were converted by Lee.

In the Women’s All Ireland League, U.L. Bohemian had a resounding 43-5 home win at home to Suttonians. Clodagh O’Halloran and Clara Barrett each scored two tries for the winners, and Claire Bennett, Laura O’Mahony, and Rachel Allen got one each. Kate Flannery kicked three conversions and Nicole Cronin one.

A try by Roisin Ormond converted by Alison Kelly was all Ballincollig could muster away to Blackrock College, losing 71-7.