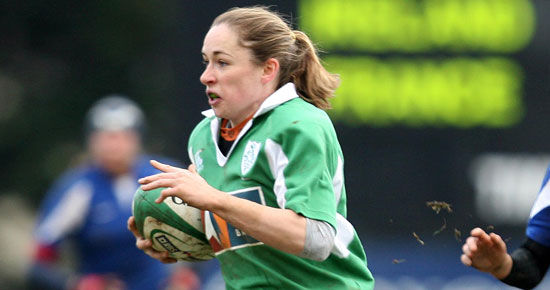 Irish Captain Sarahjane Belton has announced her retirement from rugby having failed to recover from an ongoing back injury.

Belton, who won 60 consecutive caps for her country, missed this year’s European Championships having taken some time out to allow the injury to settle down, but ongoing problems have given her no other alternative than to quit the game.

Belton, who captained her country 26 times, made her international debut against Franceat the European Championships in 2000. In 2003 she was part of the Irish team who beat Spain for a first ever win for Ireland in the Six Nations and since then she has been part of sides who have overcome Italy, Wales and Scotland in the same competition.

At the IRB Women’s World Cup in 2006 she was the only Irish player named in the tournament’s All-Star Team when she was named as the tournament’s best number 10. In her career she has also played for Limerick clubs Shannon and UL-Bohemians and for provincial side Munster. She will be remembered as one of Ireland’s best ever attacking players with her eye for the try line complemented by some top drawer kicking and defensive skills.

Irish team manager Rachel Reid, who was also Belton’s team-mate in her early international career said: ‘Sarahjane has an impeccable Irish team record. She started 60 consecutive test matches for Ireland and has been ever present since the start of what I regard as the ‘new era’, which started at the European Championships in Spain 2000. Back then she was referred to as a ‘promising young fullback” however she developed into a world-class player and inspirational leader, both on and off the pitch. She has been instrumental in building the camaraderie and team spirit within the team since she first broke into the squad.’

Reid added: ‘It has been a pleasure sharing her international years with her, both on and off the pitch and I look forward to sharing many more years of rugby with her, albeit from the sidelines.’

AIB Cup Draws Made on Saturday