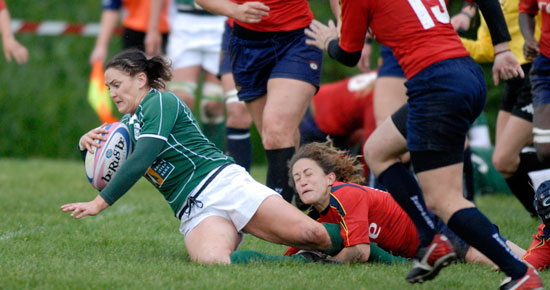 Ireland got off to a superb start at the FIRA European (Women’s) Championship as they crushed Spain 41-7 on Saturday night in Amsterdam.

Ireland’s massive win has guaranteed them a top four finish in the competition which sees14 teams from Europe take part across two different tiers.

Ireland are in Tier A with the best teams in Europe and they will now play the reigning Six Nations Champions England on Tuesday fora place in the elite final.

The massive win over Spain will be a huge boost after Ireland hugely impressed against their Catalan counterparts.

They scored seven tries in all with Grace Davitt contributing 16 points overall and a strong continuity game meant Fiona Coghlan’s first game as captain got off to the perfect start.

Orla Brennan was first on the score-sheet as Ireland got off to a bright start and some good off-loading saw her crash over after just two minutes. Pacy winger Jeannette Feighery got the first of her two scores just minutes later when Joy Neville at number 8 had linked up with scrum half Tania Rosser to put the UL-Bohs back through and there were further scores before half-time from Davitt, with a strong run that ended under the sticks, Feighery again and Jo O’Sullivan. Spain scored their only try just before the half. Ireland led 29-7 at the break.

They continued in the same vein after the turnaround with Davitt bursting through with some strong running to score and convert after two minutes. With a 36-7 lead Ireland didn’t score again till the 80th minute when Gillian Burke crashed over but they had done enough to ensure that they will be confident against a tough game against England on Tuesday.

Out wide Ireland were far superior with the likes of Feighery, Niamh Briggs and Davitt all impressing as the back-line cut Spain open with some excellent running lines and angles while up front the Irish pack played a strong off-loading game and set up perfect platforms for their classy backs.

In other results England beat Sweden 80-3, Wales beat Scotland 27-10 and France beat the Netherlands 24-3.Tier B of the competition gets underway today.

Coach Simon Broughton gave one new cap on the night with Leinster’s Emer McManamly coming off the bench.