Injury Concerns for Shannon Ahead of Cup Final 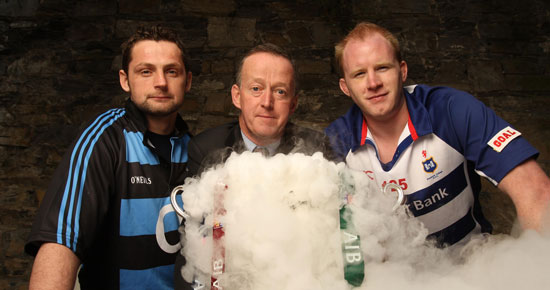 Saturday is a huge day for Irish club rugby as Dubarry Park in Athlone plays host to the 2007/08 AIB Junior Cup and AIB Cup finals. Blackrock College and Shannon will compete for Senior honours. Live on RTE 2, the game kicks off at 3.30pm.

In the Junior Cup final (kick-off 1.30pm) Navan and Tullamore will clash in a fascinating Leinster derby.

With several injuries to contend with Shannon Coaches Mick Galwey and Ian Sherwin will not finalize their starting XV for Saturday’s AIB Cup final on the Morning of the game.
Going into the Semi final against Galwegians they already had a significant injury list with AIB League Veteran Andrew Thompson (Centre), Colm McMahon (Wing Forward), Kevin Griffin (Prop) not involved in the game. All three would have considered first choice players. Thompson pulled a quad muscle in the AIB league game against UCD and is definitely ruled out of the final, but McMahon (shoulder) and Griffin (neck) are included in the squad despite the fact that their injuries continue to cause concern. To add to the selection woes Killian O’Neill (prop) and Richie Mullane (centre) both came off the field in the semi final win and are also doubtful starters while replacement centre Joe Manual picked up an ankle injury playing a Munster Junior Cup game on Saturday. Fergal Walsh withdrew from training on Thursday evening nursing a dead leg which may be serious enough to rule him out. O’Neill (hamstring) and Manuel did resume training on Thursday evening but took only a limited part while Mullane (calf) has not trained at all this week and is a serious doubt. With Thompson definitely out, Mullane highly doubtful and Manuel 50/50 at best , U20 centre Mick Kinsella has been called up to the squad and will , at the very least , be part of the 22 man match day squad. All players who are in doubt will be given every opportunity to prove their fitness which effectively means that Shannon will not know their team until Saturday morning at around 12pm.