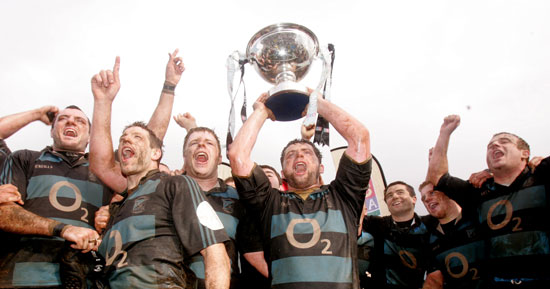 Munster utility back Mossy Lawler kicked two second half drop goals as Shannon prevailed in a muddied war of attrition.

But Shannon winger David O’Donovan knocked over his second penalty just after the restart, and although Des Dillon and Shane Byrne had excellent games for ‘Rock, Lawler was the match winner.

The results means two Limerick clubs have won the AIB Cup in the space of 12 months with Shannon following in the footsteps of Garryowen.

In the competition’s three-year history, all three winners to date have hailed from Munster – Cork Constitution won in the inaugural 2005/06 season.

Former Leinster, Ireland and Lions hooker Byrne was distraught after the final whistle on Saturday. ‘Rock were really up for this game, sensing an upset with injuries robbing Shannon of some first team players and the Limerick side only played their semi-final last weekend.

But Shannon’s greater cup final experience and their ability to turn games in their favour in the final quarter came to the fore once again.

‘Rock played their hearts, had the better of possession for long periods and looked the more capable of getting a try.

This was one that got away and they know it. As Shannon’s celebrations began in earnest, Byrne wearily shook his head perhaps mindful that this could be his last final as a senior player.

The 36-year-old has been one of the cornerstones of the Blackrock pack this season, along with team captain Dillon, the superbly athletic former Connacht and Leinster back rower.

The rain beat down heavily on the midlands venue as the game got underway. ‘Rock, relying on a mix of youth and experience, showed some early nerves with out-half Kyle Tonetti missing touch.

Yet Shannon, who were also competing in their maiden AIB Cup final, were nervy too with skipper David Quinlan and Fiach O’Loughlin dithering at the back of a scrum.

Although he was able to select Munster duo Lawler and Donnacha Ryan in his side, Shannon coach Mick Galwey was still missing the likes of Andrew Thompson (hamstring), Richie Mullane (calf) and Fergal Walsh (dead leg).

The absence of Thompson and Mullane saw the 19-year-old Mike Kinsella made his senior debut for Shannon in the centre. Kinsella is studying physiotherapy in Manchester and only comes home to play for Shannon at weekends.

‘Rock were forced into a late change – Gary Brown’s services were required by Leinster for their Magners League clash with Munster, so Simon Morrissey stepped in to partner Brian Canavan in the Dubliners’ midfield.

With both sides taking their time to adapt to the conditions, ‘Rock hit the front in the ninth-minute when Carr, who had accumulated 163 league and cup points before kick-off, slipped a penalty inside the left hand post.

Shannon’s pack were not able to exert much pressure and three lineout steals, with Dillon and Paul Graham profiting, did little for their confidence.

All the early momentum was Blackrock’s and after Shannon flanker Phil O’Connor was sin-binned for a 19th-minute punch, Carr curled a long range penalty through the posts for a 6-0 lead.

But some quick thinking from out-half Lawlor lifted the siege. He caught ‘Rock on the hop when he took a quick 22-metre drop out and kicked Shannon up to the ‘Rock ten-metre line.

On the half-hour mark, Shannon winger O’Donovan was successful with a penalty from the left and the eight-time league winners got level three minutes into the second half when O’Donovan repeated the trick, after a midfield break from long-legged flanker Colm McMahon.

‘Rock recovered well and had the better of play before Lawler slipped back into the pocket and dinked over a 49th-minute drop goal. That was clinical Shannon at their best.

9-6 ahead and having shown little in attack, Shannon attempted to go up through the gears but Carr reeled them back with a smashing penalty from distance, three minutes later.

In a tightly contested final quarter, O’Donovan sent a difficult penalty to the right of the posts and as the rain began to spill down again, the ‘Rock pack rolled up their sleeves.

Dillon and company managed to camp in the Shannon 22 for much of the final ten minutes but the defence from Galwey’s side was exemplary.

AIB man-of-the-match Lawler once again got Shannon deep into the Dubliners’ half as he kicked a loose ball clear after a knock on from Shane Monahan.

The Shannon forwards piled in at the ensuing ruck, on the ‘Rock 22, won turnover ball and after a couple of pick and goes, Lawler, with minimal back-lift, flung over the deciding drop goal, eight minutes from time.

‘Rock did have one last chance when replacement scrum half David Moore scampered through a gap but O’Donovan produced a great ‘man and ball’ tackle to stave off the danger.

There were joyous celebrations for Shannon on the final whistle as they added the AIB Cup to the ODM Munster Senior Challenge Cup they won in December.

And of course, they are now in the hunt for a hat trick of titles with their place in the AIB League Division One semi-finals already secured.

AIB All Ireland League Round Up