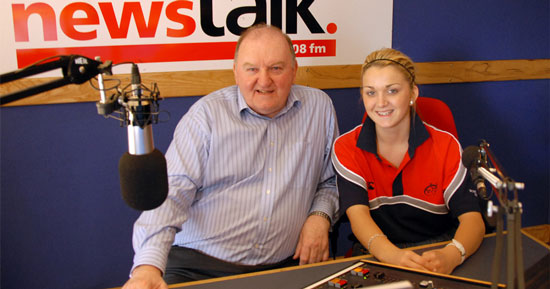 In the first interprovincial game at this level, the Munster U18 girls team play Ulster on Sunday May 13th next in Malahide RFC, with a kick-off time of 2.30pm. Ahead of that game, Captain Louise Egan met up with rugby pundit George Hook who lent his support to female rugby.

Nationally renowned and often controversial rugby commentator George Hook has given a resounding statement of support for female rugby.

George Hook is often described as an irascible, controversial and certainly opinionated rugby commentator. However, nobody would question his massive knowledge of the game of rugby or his exceptionable ability to analyse the game.
It came as a great boost to female involvement in rugby recently when he emphatically stated his support for a place for of the "female of the species" in the wonderful game of rugby.

The occasion for Hook’s comments was the recent visit of Munster Under 18 Girls’ Captain Louise Egan to the News Talk 106-108 FM radio studios in Dublin. Louise was on a crusade to gather some publicity for girls’ involvement in rugby. Her more immediate aim was to get publicity for the first ever under 18 girls’ inter-provincial game between Munster and Ulster on Sunday May 13th.

She found a ready enthusiast and interested listener in George Hook. Listening might not be a function that most of us would normally associate with Hook, but he was captivated by Louise’s story of the development of age-grade rugby for girls in Munster.

Hook thinks that females should play rugby. Not only does he think that, he believes that females are better able to be coached on more technical aspects of the game than males, who bring some baggage, mainly from involvement in other sports, to the rugby coaching environment.

Some might say that Hook is simply providing some platitudes here, to engage with the female audience. Stop there. This is a man who has "walked the walk" of promoting female involvement in rugby. There is no more practical support for that objective than forsaking late evenings and early mornings in the coaching of teams. Hook has spent many years coaching female teams at schools, colleges, club and international levels. Any suggestion by this interviewer or any other interviewer that his comments on female rugby might be a tad artificial, are extinguished when he lists his track record in the area.

Indeed, the first Ireland Women’s team that took part in the first ever Women’s Rugby World Cup was coached by… "G.Hook".

From the first time Hook coached a female team at Stanford University in California, in 1987, he says he was "deeply impressed by their ability to understand the more difficult concepts of the game". He went on to say that the women’s psyche "is better suited to being coached a new technical event" than their male counterparts, who often bring "baggage" from other sports to the rugby coaching environment.
So George, girls are smarter, but what about playing such a physical game, isn’t that where they fall short? Hook takes a radically different view. "World champions New Zealand have demonstrated that the female of the species in those mis-begotten South Pacific islands is just as good as their male counterparts".

Is he wrong about female rugby? I am not he says: "women’s rugby is the fastest growing sport in the USA. When I was coach of the first ever Irish Women’s team, many thought there was no place for females in the game of rugby". Times and attitudes have changes. For a number of years now there have been club, provincial, national and international competitions for female players. But perhaps a new era is dawning now on rugby. Munster have developed a highly competitive league system for girls at under 15 and 18 levels. Games are played under the same rules that apply to their male counterparts so there is no "dumbing down" of the rules, or the passion required to play the game.

Hook says "my commitment is total to women’s rugby, the reason being that they have every right to play the game they love with all the same love, passion and affection that I have for the game. Roll on women’s rugby!"
What does Munster Rugby say about that? Ultan O’Callaghan is the IRFU’s Domestic Games Manager for Munster. "We like to say that the Munster Under 18 Girls’ team is the new sister in the Munster Rugby family. Our new sister team is as valuable to us as any other team in Munster Rugby".

That same Munster passion is reflected in Hook’s reaction to Louise Egan’s report on the development of the Munster Under 18 Girls’ team in their first ever season. "The fact that we now have a Munster Under 18 Girls’ team will continue the great tradition that my province has in developing the sport and who knows, but the first ever European Champions for women might well be Munster".

George Hook’s comments will serve as motivation for Munster age-grade rugby to work even harder to set the standard for the country.

Munster play Ulster on Sunday May 13th in Malahide RFC. Kick-off is at 2.30pm.

We are deeply grateful to George Hook for taking time out of his tough schedule and for making us so welcome. He really showed his commitment to girls’ rugby and to Munster. Thanks also to News Talk 106-108 FM for their kind support.

You can listen to George Hooks interview with Louise Egan on http://www.munstergirlsrugby.com/content/view/73/1/