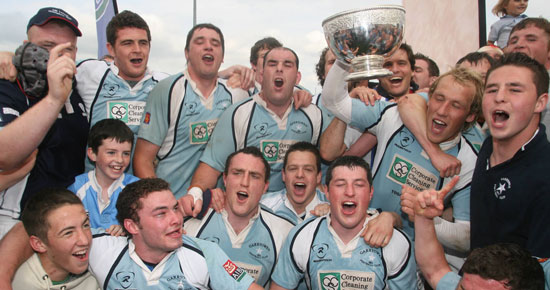 Garryowen claimed the AIB All Ireland League Division One title in a cracking final at Musgrave Park, finishing one point clear of Cork Constitution on a 16-15 scoreline

Garryowen added the AIB All Ireland League Division One trophy to their haul of silverware this year after coming out on top in a cracking final against Cork Constitution in Musgrave Park. With the AIB Senior Cup, the ODM Munster Senior Challenge Cup and the Heineken Munster Junior Cup titles already in the bag this season, along with their recent award of Munster Senior Club of the Year, this surely was the ultimate prize, having not won the coveted title since 1994. The winners trophy is destined to remain in Limerick for the fourth year in a row, following Shannon’s previous three consecutive title wins.

Constitution had an early opportunity to get on the score board with a penalty attempt from Richie Lane after four minutes, however the kick didn’t find its target and it was Garryowen who opened the scoring with an eleventh minute penalty from Eoghan Hickey, helping his side to settle and shake off early nerves. The Cork side’s cause wasn’t helped by problems in the lineout, with Garryowen’s Mark Melbourne and Anthony Kavanagh causing plenty of problems for Constitution by stealing ball every chance they could and giving Garryowen the wealth of possession. Constitution however showed plenty of pace all over the field, and when they did get their hands on the ball they attempted to play a high tempo game- injecting pace at every opportunity- in an attempt to stretch the Garryowen defence. A 24th minute penalty kicked from three metres inside Constitution’s half by Eoghan Hickey went just right of the posts, however four minutes later he stretched the Limerick’s side lead to 6-0 when his third attempt went over.

Constitution started to look stronger in the closing stages, with Richie Lane got Constitution on the scoreboard after 35 minutes with a penalty kick, with Daragh Lyons’ kicking for the corners proving effective. Tom Gleeson’s massive tackle on Conor Kilroy close to the 40 minute mark was a turning point, with Gleeson again showing great skill a minute later to claim a try for Constitution. Hickey’s attempted chip ahead was blocked down and the ball found its way into Timmy Ryan’s hands. Ryan’s quick pass to Daragh Lyons and an offload to Gleeson who came storming through saw the centre run into for a well worked try from the 22. Lane’s conversion gave Cork Constitution a 10-6 lead at half time, with Garryowen trailing despite being firmly in control for much of the first half.

Three minutes after the restart, Garryowen had an early opportunity to regain the lead after Ciaran O’Boyle kicked a loose ball on the ground over the Constitution line to set up a frantic race with Denis Hurley. Hurley got the touch first, although it was an anxious moment for Constitution. Cillian O’Boyle came off the bench ten minutes after the restart to inject some pace into the Garryowen attack, with the Limerick side pinning Constitution back inside their 22 until midway through the second half. A huge 53rd minute penalty kick by Hickey from the Constitution ten metre line brought Garryowen to just a point behind Constitution. Two minutes later, Kilroy was stopped just two metres short of the line after the ball was swept across the back line from a lineout on the half way line. Constitution’s defence remained intact despite the intense pressure from Garryowen.

As the last quarter approached and only a point separating the sides, the game was hanging in the balance. With much of the game played an intense pace, the heat certainly was a factor as fatigue started to set in on both sides and the handling errors became more pronounced. However, despite whatever tiredness there was on both sides, the final ten minutes were dramatic as both sides gave it their all.

Cork Constitution regained the lead in the 70th minute after the ball was moved quickly across the pitch and an outstanding pass from Gleeson saw Denis Hurley cross the line. Despite Lane missing the conversion, Constitution now led 15-9 as the clock counted down. Three minutes later Garryowen claimed one back, with Damien Varley smashing over Con’s line, with the entire Garryowen pack driving him on. Hickey’s conversion was on target, giving Garryowen a 16-15 lead. The final few minutes were frantic, as Constitution attempted to push Garryowen back up the pitch. It seemed that they would reclaim the lead when replacement Conor Quaid found a gap and made a 50 yard dash up to pitch only to be stopped by great defensive work by Garryowen inside the 22. Constitution positioned themselves well inside the Garryowen 22 and Quaid’s drop goal attempt shortly after didn’t find its target. As Constitution threw everything at Garryowen, a second drop goal attempt by Lyons was also agonisingly off target. Referee Alan Lewis blew the whistle to give Garryowen the victory. Garryowen’s Peter Malone was voted AIB Man of the Match.