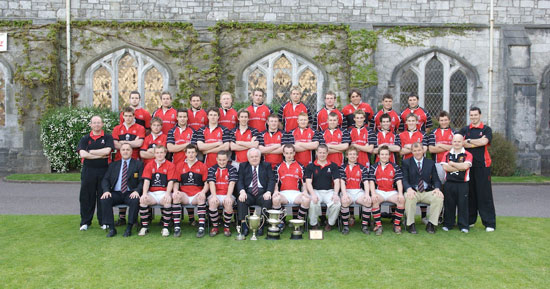 Its been a remarkable season for UCC U20’s who have claimed the titles of All Ireland Champions, South Western Conference League Champions, Munster Cup Champions and Intervarsity Champions during the 2006/7 season.

What do O’Gara, Stringer, Flannery, O’Driscoll, Leamy, Leinster’s Stephen Keogh and Leicester’s Frank Murphy have in common apart from their Munster lineage? They’ve all won U20 All Ireland champions medals with UCC RFC. In 1996, the first year of this prestigious U20 national competition, otherwise known as the Fraser Mc Mullan trophy, UCC won it with O’Gara, Stringer, Flannery, O’Driscoll on board bringing the first ever U20 national title south. The ’96 team went on to become European Students Champions in ’99. The U20 national title went Leinster way in ’97 and ’98 when Blackrock achieved back to back wins. 1999 was Lansdowne’s year, 2000 Garryowen won it and in 2001 UCC lost out to a talented Bruff side in the final in Thomond Park. That UCC side featured Denis Leamy, Stephen Keogh, Frank Murphy and Conrad O’Sullivan all whom went on to become Munster players in 2003 -2004. The loss to Bruff left many players with a sense of unfinished business and the following year 2002 the college side, again featuring most of the 2001 team, reached the national final where they faced Bruff in a repeat of the 2001 final. This time UCC proved too strong for the Limerick side and secured their second All Ireland title to add to that of ’96. In 2003 and 2005 the Cork side bowed out at quarterfinals and semi finals respectively; Trinity winning both titles in 2003 and 2005. UCC won a third title in the interim when the 2004 vintage swept all comers aside beating Belfast Harlequins 36-13 in Dublin and brought ‘Fraser’ back to UCC and Munster. The 2004 champions featured some of the up and coming Munster players of today with the likes of Tim Ryan, Donnacha Ryan, Ross Noonan and fullback Denis Hurley all seeing Magners league action in the past two seasons. Last season UCC went out to a strong Trinity side in the semis. The Dublin students eventually lost out to Shannon in the final – Shannon winning their first U20 All Ireland.

And so to the 2006-2007 season. UCC ran a strong recruitment campaign at U20 level in the off season and when last seasons U20’s were added to this years high calibre of fresher intake the side not only had strength but that crucial ingredient in successful campaigns strength in depth in all positions. Competition for places was reflected in the intensity to training, commitment to gym work and additional fitness and skills work done by not only the Academy members but most all U20s in the club. Internal competition and high standards set and maintained by the players set the tone from the start. The goals for the season were ambitious but simple…to win all competitions. A number of these U20s were drafted into the senior training panel and immediately impressed. UCC’s AIL Division 2 senior team regularly featured up to seven U20s; by far the youngest team of any competing in the AIL. In their second last match of the senior AIL campaign v Young Munster last month the senior team featured ten under 20s or 50% of the team. One of the attractions of playing for College is that the better U20s could expect to play senior rugby at All Ireland League in year one or two.

The Academy programme, now in its 6th year, ensures that these players are physically, technically and tactically prepared for life in senior rugby. Many of these players go on to play for Ireland at U19 and U20 level as well as Irish Universities. Fifteen UCC Sports Scholarships were awarded to rugby this year including two to the very first lady members of the Academy who both play for Munster. These Sports Scholars operate under the UCC Rugby Academy structures. In addition nine players are on the Munster Academy. This season the Mardyke side had three Munster players in Darragh Hurley (Munster Young Player of The Year), Jeremy Manning and Portuguese international Diogo Mateus. Munster and Ireland player John Kelly was this year’s senior backs coach.

A typical in season weekly schedule for these UCC players would see them complete two/three 80 minute supervised weights sessions, a combined speed and skills session, two/three team training sessions, weekly lineout or kicking session, a Saturday game and their own pool recovery session on Sunday or Monday. There is a strong emphasis on nutrition and recovery strategies including ice baths post training and games as well as very specific nutrition plans for game day in terms of content, frequency and timing of meals and hydration. The Academy programme is open to all under 20’s who are encouraged to take up the programme even if they are not on the Academy or Sports Scholarship pay scales. The programme is supported by specialists in strength & conditioning, speed, exercise physiology, nutrition and medical. Players attend a number of education modules on these areas covering topics such as principles of training and lifestyle, nutrition, anti-doping, recovery strategies to name a few. Each topic is supported with booklets. The principles and theory are reinforced at training and in gym.

The first of this seasons four pieces of silverware was won back in October when the U20s beat Trinity, UCG and UL Bohs comprehensively to win the U20 Intervarsity Conroy Cup; an annual weekend long competition this year hosted by UCC. A 13 game league campaign resulted in the students finishing top of their provincial league and in the process automatically qualifying for a home quarterfinal place in the All Ireland against Ulster’s number two team Queens University Belfast. Winning the league title meant that the Cork students avoided the playoffs where provincial league finishers 2nd play 5th and 3rd play 4th to complete the 3 teams from Munster/Connacht who would then join Leinster’s three best and Ulster’s top two to complete the 8 teams in the All Ireland quarter finals. In mid March a Munster U20 cup title, 5th in a row, saw trophy number three added. When the All Ireland quarters came around in late March a 34-7 win over Queens meant that UCC would face UL Bohs in the All Ireland semi final in Limerick on April 7th (Blackrock beat Lansdowne in the other semi). A 34-16 win over UL Bohs in Limerick meant that it would be a Munster v Leinster final of UCC V Blackrock to be played in neutral Nenagh RFC Co. Tipperary on April 14th.

Powerful forward play, smart tactical kicking with a first half wind, dominant set piece, well marshalled defence and a season long indominatable spirit saw UCC win 34-21 in a cracking final. Six of the seven reserves played a significant part in the last twenty minutes of the game reflecting the strength in depth. A further ten squad players were there to add vocal support for the team and many of the senior squad travelled in support. Trophy number 4 completed an unprecedented U20 grand slam for the Don Keogh captained side with 34 points being scored in each of the quarters, semis and final respectively. UCC’s fourth national U20 title (and third in six years) was won scoring 112 points in the three rounds playing a brand of rugby close to the hearts of the players.