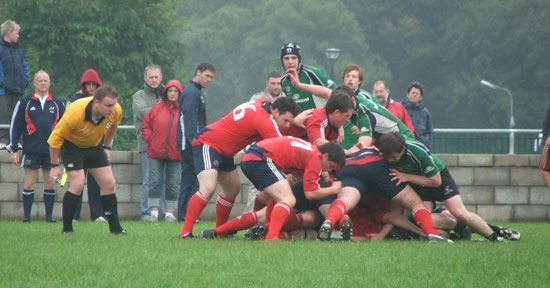 The Munster U19 Club side went down to Connacht at the weekend, despite a spirited performance in what proved an open and attractive fixture

Munster went down fighting in the opening encounter in this season’ Under 19 Club Interprovincial in Wilton. In an open and running game, both sides came here attempting to play open and attractive rugby. In a typical start of season encounter however, errors were prevalent on both sides and the game had frequent interuptions as a result. On the balance of play Connacht just about deserved their victory, and their well drilled side stuck to an open running game plan throughout. Connacht appeared the more organised team and their extended pre season training, compared to Munster, showed as the match wore on. Credit is due to the Munster lads who were within a whisker of scoring a try at the death to steal the game.

Munster opened the scoring on 7 mins with a well worked try off turnover ball, when centre Luke O’Dea went under the posts. Cormac O’Flynn converted and Munster went into a 7-0 lead. It was not long however before Connacht got into their stride. They got their quick tempo game going by recycling very effectively and moving the ball away from contact. After 25 mins the sides were level with right wing Colin Conroy crossing after some sloppy defending. A Brendan Carpenter conversion brought the sides level. Carpenter was again successful on 30 mins with a penalty goal, but with the last action of the first half Cormac O’Flynn leveled the match at 10-10.

The second half continued in much the same way as the first with both sides attempting to move the ball but Munster in particular started to make errors and turn the ball over frequently. This gave Connacht the control they required and apart from a brief moment of pressure closed the game out as relatively comfortable winners 10-16 thanks to two second half penalties from Brendan Carpenter.

Next week sees Munster off to play Leinster in Ashbourne RFC with a 2.30 ko (Subject to confirmation)