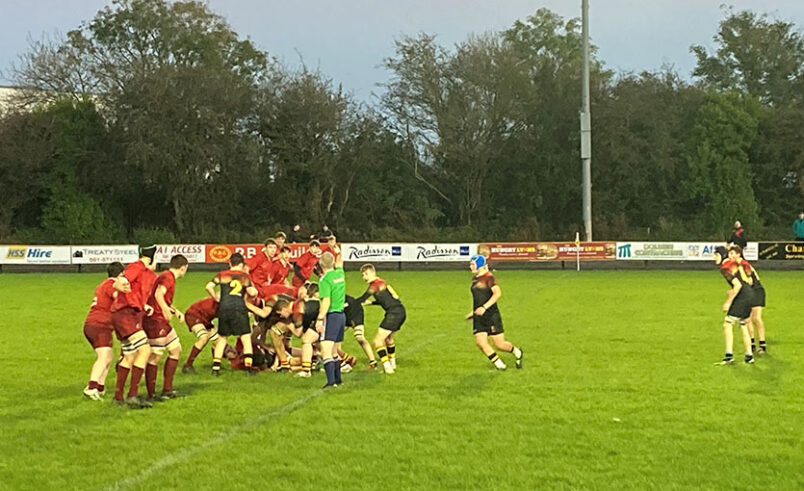 The Munster U16 CSP group playing Ardscoil Rís in the preliminary rounds of the Munster Schools Junior Cup earlier this season.

The U16 CSP group made their maiden appearance in the Munster Schools Junior Cup competition and they were drawn against Ardscoil Rís, CBC, Castletroy College and Rockwell College.

The U16 CSP group was originally selected from a regional round robin series which took place in September. Here, 105 nominated players from their respective clubs represented their region. East Munster took the honours after three rounds and 65 players in total were selected for the CSP program thereafter, with half playing in the schools programme and another group playing challenge games against CBC 2, Ennis and Cashel.

The first block of games also concluded with a combined CSP group game against PBC and an internal trial game recently. This programme will continue each Monday in the new year, continuing the player development focus on skills and conditioning.

The U19 CSP group was a combination of U17 and U18.5 club players who played against Crescent College, CBC, St Munchin’s College and Rockwell in the Pinergy Munster Schools Senior Cup preliminary stage. Challenge games against PBC and Castletroy College concluded their series of games in December.

“These games were extremely beneficial for the club select groups, as part of their continuous personal development. The games I viewed were high intensity with players applying themselves very competitively. I am sure this will stand to both the school and club players as they enter their respective post-Christmas competitions.”

“We had significant support for this program again this year, especially from the youth committee, the clubs, the coaches, the players and their parents. With such a large geographical spread of players, it can be challenging to prepare a group for these games, but sincere gratitude goes to our staff, backroom teams and coaches, the players and most especially their parents for their ongoing commitment and travel throughout the province.

“A large portion of clubs are represented within these groups, and it is very satisfying watching these players progress through the pathway, with our team supporting them to be the best they can be. Based on the games I have viewed over the last three months, the future is bright in our province.

“Finally, we would also like to thank the clubs and schools who offered their facilities to host the CSP games, including CBC, Garryowen FC, Young Munster RFC, Old Crescent RFC, Cashel RFC, Highfield RFC and UCC RFC. Your support and use of your facilities is very much appreciated.”

Fixtures Over The Christmas Period