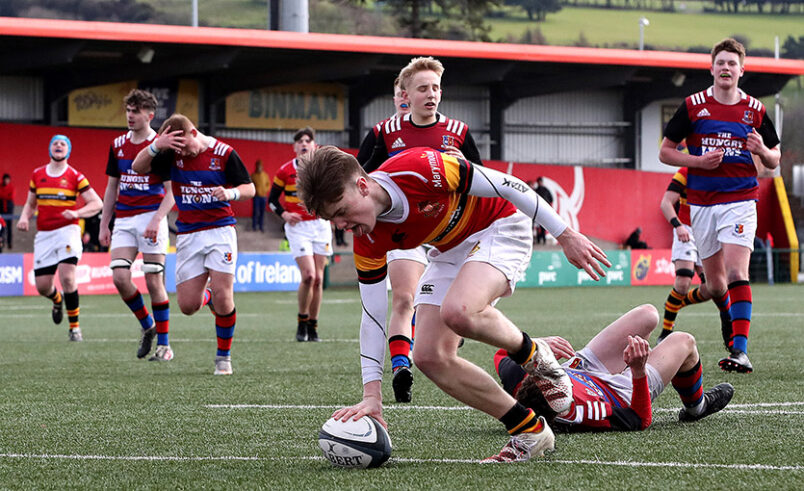 Christian Brothers College advanced to the final of this year’s Munster Schools Junior Cup after the Cork school recorded a 40-19 win over St Munchin’s College at Musgrave Park this afternoon.

CBC were denied on two occasions in the opening minutes thanks to some good defending from the Limerick school. Scrum-half Christopher Barrett knocked on under pressure close to the try line while just moments later, the Cork school were denied once again just short of the line.

CBC then suffered a blow when second-row Zach Coughlan was sent to the sin-bin for a dangerous clear-out. Despite the numerical disadvantage, it was CBC who opened the scoring when out-half Charlie O’Shea quick-tapped a penalty and touched down in the corner.

Six minutes later, CBC flanker Cian Walsh powered through two tackles to get his side’s second try of the game. The strong wind throughout the game made kicking conditions difficult as O’Shea was unable add the extras for either of the tries.

With a 10-0 lead, O’Shea got his first successful kick of the game as he notched three points for his side with a well taken penalty.

With the game approaching half-time, St Munchin’s received a big boost when some good passing and handling brought play deep in the CBC half where Alex Quinn was on hand to score in the corner. Tom Wood’s conversion was wide of the posts.

Behind by eight points at the start of the second half, St Munchin’s picked up from where they left off as fullback Ben O’Mahony executed a delightful chip over the CBC defence before he collected the bouncing ball to touch down under the posts. Wood’s successful conversion ensured that St Munchin’s reduced the deficit to just one point with the score now 13-12 in CBC’s favour.

Munchin’s did suffer a setback minutes later when Quinn was yellow-carded for a deliberate knock on. This seemed to re-awaken CBC who then scored tries through O’Shea and Andrew Murray. O’Shea’s conversion was successful for Murray’s try which gave CBC a strong 25-12 lead.

The Cork school continued to push on with tries from number eight Conor Galvin and Matthew Shalloe.

Another yellow card for a deliberate knock on, this time from Munchin’s Billy Power, didn’t make life any easier for the Limerick school as CBC added on another try from Murray, his second of the game.

Credit to Munchin’s, they kept battling and in the dying moments of the game, the hardworking Charlie Grace scored his side’s third try but it was CBC’s day as they now look forward to a final meeting against either Crescent College Comprehensive or Cork rivals PBC.