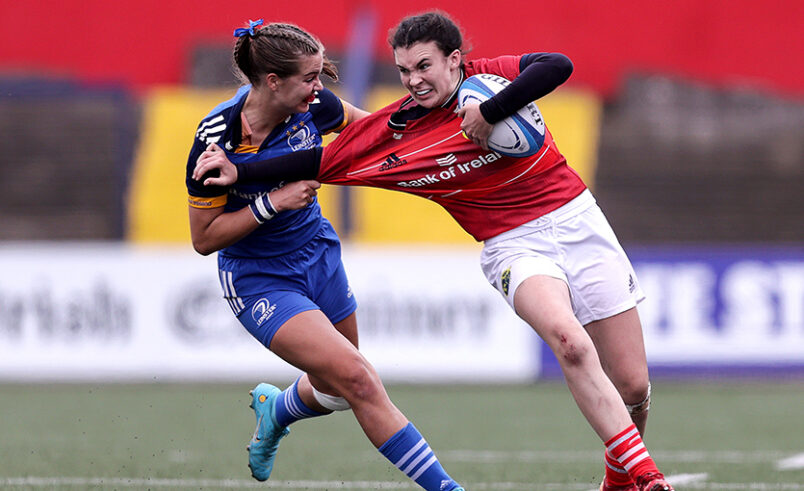 The Munster U18 Girls fell to a heartbreaking 7-10 defeat at Musgrave Park this afternoon as their brave comeback fell just short against Leinster.

The eastern province started strongly as they dominated possession and territory but some good Munster defence saw a crucial turnover secured which allowed the home side to clear their lines.

Early on, there was some early concern for Ellie Cournane as the winger shipped a big hit but she was able to continue after a brief break in play.

The visitors got the first try of the game when they turned over possession in midfield and made their way up the pitch where the ball was spread out wide for Amy Larn to touch down. Abby Moyles’ conversion hit the post as Leinster took a 0-5 lead after 10 minutes.

A great carry from Lyndsay Clarke got Munster up to the Leinster 22 as the home side looked to respond. Munster w0n a penalty soon after and kicked to the corner but unfortunately a crooked throw let Leinster off the hook.

Munster were down to 14 players when Clarke received a yellow card for a high tackle. Leinster made their numerical advantage count when Robyn O’Connor touched down in the corner to give Leinster a 0-10 lead going into the half-time break.

Munster came out for the second half with a huge desire to turn things around.

A powerful carry from Aoife Fleming 10 minutes into the second half had Munster just inches from the Leinster line but a knock on during the next phase at a crucial moment allowed the away side to clear.

Munster were getting the better of their opponents and they dominated possession and territory but they couldn’t find that crucial breakthrough as some excellent defending from Leinster kept them at bay.

With seven minutes remaining, Aoibheann Hahessy crashed over from close range to get Munster back within five points before Caitriona Finn notched the conversion to leave just three points between the sides.

In a nail-biting final few minutes, Leinster missed a penalty which would have put them six points in front.

With the clock in the red, Munster won a number of penalties which got them up the pitch but Leinster secured a crucial turnover to seal the win in what was a fantastic game of rugby played between two determined teams.