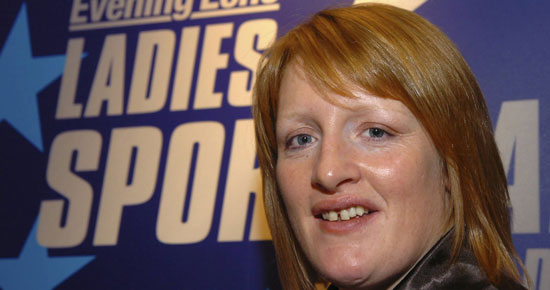 Irish prop Marie Barrett was honoured this week at a sporting awards ceremony in Cork. Barrett, who had a successful year in 2007, won the Evening Echo’s monthly ladies sports-star award last February after her outstanding displays in Ireland’s front row during the Six Nations.

She was part of the first Irish team to put together back to back wins in the competition as they overcame Scotland and Italy in succesive games.

Marie was present at the Evening Echo’s Ladies Sports Star of the Year ceremony this week, where she joined the 11 other winners of the monthly awards.

Having only taken up rugby in 2002, the postwoman from East Cork has since proved herself as one of the best front row forwards in the country and an oustanding leader for her club Highfield, whom she has previously captained, as well as her province and her country.

She led Munster in the 2007 season and under her captaincy the Interprovincial crown was won after a tough battle with Leinster in the final.

She was also part of the Highfield team who contested two All Ireland finals last season, having gone 12 months undefeated in competitive rugby.

She has just recently been selected for Ireland’s match squad for their opening game against Italy.

The awards ceremony included special words from Irish sporting legend Sonia O’Sullivan and an inspirational speech from Mary Davis from the Special Olympics.

The overall winner was basketball star Jessica Scannell but Marie and every other monthly winner recieved a special piece of Newbridge jewellery on the day.