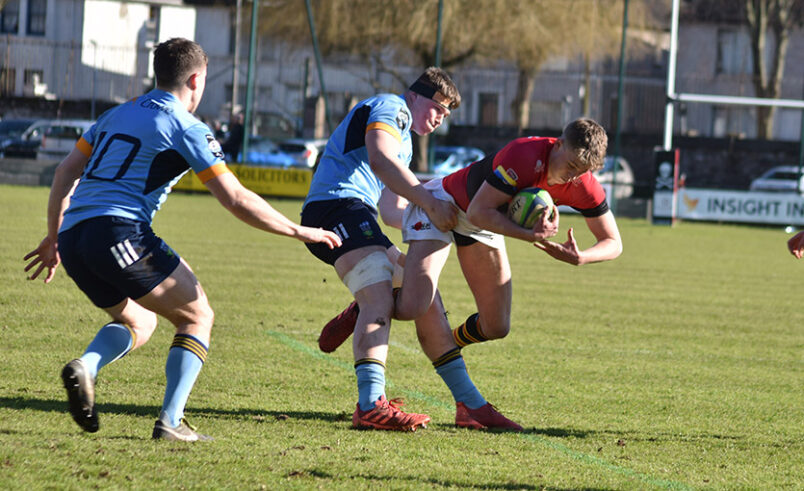 The battle for positions in the All Ireland League continued ahead of the top four places for the play-offs and bottom two places in each section of the league being decided with three rounds remaining.

Clontarf are assured of their play-off place in Division 1A after their 12-11 home win over third placed Terenure College, but the other three places are still up for grabs.

Cork Constitution still hold on to fourth spot despite losing 32-27 to Dublin University at College Park. Alex McHenry scored two tries for the Temple Hill side and Gerry Hurley and Greg Higgins got one each. Aidan Moynihan kicked two conversions and a penalty.

Garryowen got back to winning ways with a 29-26 home win over Ballynahinch, a result that condemns the Ulster side to the relegation play-offs. Dave McCarthy and Matthew Sheehan scored tries for Garryowen and Tony Butler converted both and also added five penalties.

U.C.C. will be facing Ballynahinch in those play-offs in April, after they lost their Colours match against U.C.D. 33-12 at the Mardyke. Daniel Squires and Louis Bruce scored tries for the Cork students and Squires also added a conversion.

Highfield took a step closer towards a play-off place in Division 1B after their 29-13 bonus point win at home to Malone. Sean Garrett, Eddie Earle, Sam Burns and Ben Murphy scored tries for Highfield. Shane O’Riordan kicked three conversions and a penalty.

Shannon moved up to third place five points behind Highfield after their away victory against Old Belvedere on a 33-22 scoreline. Kelvin Browne, Killian Dineen, Aran Hehir, Jack Flannery and Kieran Ryan were Shannon’s try scorers and Flannery kicked four conversions.

The big surprise in Division 2A was the defeat of second placed Cashel by bottom side Rainey Old Boys 24-21 at Maherafelt. Brendan Ryan scored two tries for Cashel and Conor Cashman one. Cian Mullane converted all three tries.

Dolphin ran in seven tries in their 47-26 away win at Ballymena, Phil Dowling, Ryan Foley, Brian O’Mahony, Dave O’Mahony and Barry Fitzgerald were their try scorers.

Old Crescent eased their relegation worries with a 24-17 away win against Buccaneers. The winners did all their scoring in the opening half as they led 24-0 at the interval with two tries from Dan Hurley and one by Val McDermot. Ronan McKenna converted all three tries and also added a penalty.

Two late penalties from Harry Byrne earned U.L. Bohemian a 30-24 home win over Nenagh Ormond to keep them nine points ahead of the Tipperary side who occupy the second last spot. Conor McMahon, Patrick Scully and Rob Buckley scored tries or Nenagh. Fionn McGibney converted all three and also kicked a penalty.

Both Bruff and Sunday’s Well eased their relegation worries with wins in Division 2C. Bottom side Sunday’s Well moved out of the relegation zone with an impressive 46-12 home victory over Omagh Academicals. Maurice Daly scored two tries for the ‘Well and Denis Hurley, Fabien Loughry, Shane Desmond, Ryan Kelleher and Conor O’Brien got one each. Josh Featherstone kicked four conversions and a penalty.

Two tries from Luke Hogan converted by Darren Cross were not enough for Clonmel who lost 40-14 away to Skerries.

Ballincollig lost at home to Cooke 38-25 and Kerry were defeated 29-3 by Malone at Gibson Park.